OK, so we may have stretched the truth a bit here; Sophie's already been working for cafébabel for a few weeks now. But we still wanted to introduce you to our newest - and coolest - recruit...

cafébabel: Who are you, and what are you doing?

My name's Sophie, and right now I'm drinking a coffee.

cafébabel: Very mysterious. What could we learn about you from social media?

My Instagram profile reads: "Pictures from Tübingen to Krakau and all the places inbetween." I studied in Tübingen [in southern Germany, Ed.] and just ended up going wherever life took me - first Bosnia, then Krakow, then the US and finally to Paris. Even when it comes to what I want to do I've always gone back and forth: culture, university, journalism, politics...

I'm multilingual! Polish and German are my mother and father tongues respectively. When I was 16 I learned to speak English in the US. I'm still learning French at the moment. And I'm always interested in what's going on in the world, even outside Germany. Stories break in places like Palermo, and people share their different lives on the site. There's always cool stuff to read about, but also lots about politics and engagement. I find it exciting to be at the heart of what's happening. Everything passes through cafébabel.

cafébabel: How are you finding life in Paris so far?

Very stressful, very busy, but also very cool. It's very easy to get swept up in the flow of people here, to discover really cool things to see and do. I've already found a few corners I really love, with beautiful buildings and nice cafés.

cafébabel: You already have two nationalities, but if you could choose a third what would it be?

The idea of nationalities really irritates me. I wish we only talked about nationalities when we travelled abroad. German nationality isn't all bad; you can go basically anywhere with a German passport. We're better off than the Americans, who can't easily go to places like Iran, for example. 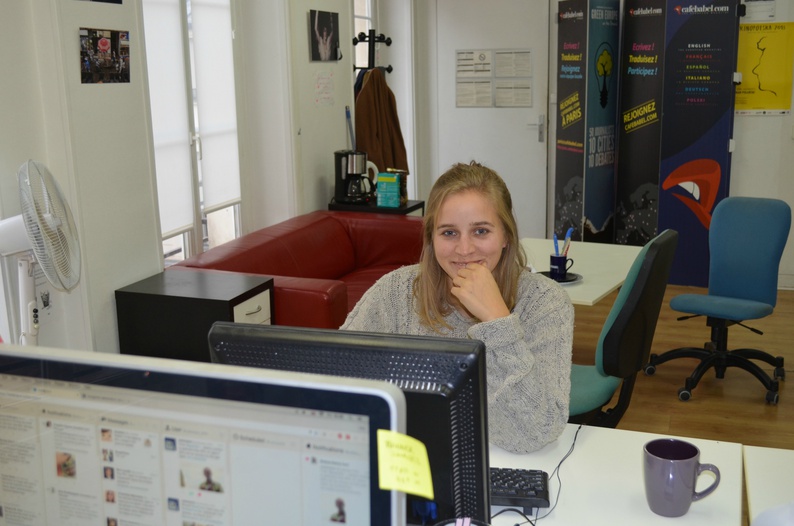 cafébabel: What could Germans learn from Poles, and vice-versa?

Oh God... Poles could teach German people how to be more spontaneous, and Germans could teach Polish people to be... more organised? No, not a clue. I like being able to pass from one culture to the other but it's difficult to pin them down.

cafébabel: Where would we find you on a Friday night?

With my friends, at a bar or a concert or a gallery. Sometimes on a train, heading somewhere new for a weekend.

cafébabel: Or in a forest in Poland? [ We had a few technical difficulties during Sophie's Skype interview since she was wandering through the Polish wilderness, Ed.]

I wasn't actually in a forest... I was on a beach, and some people dressed up as characters from SpongeBob Squarepants kept running around me and singing.

cafébabel: What book is on your bedside table right now?

I'm reading two books. Ernest Hemmingway's A Moveable Feast, to help me discover Paris. And a book by Roger Willemsen: Afghanische Reise [Afghan Trip], which is in my bag. At the moment I like reading a lot of travel journalism.

I think it's really cool.

cafébabel: Who would you give a Nobel Prize too?

I haven't read enough to make that decision. And they always focus on Western Europe and America. It's important (and exciting) to read other things. Ask me again in 20 years.

cafébabel: Tell us one film you really hate?

Pineapple Express. It's an action film with drugs and guns that wanted to be really funny. Other people really liked it because it tried to be like The Big Lebowski, but for me it was a trainwreck.

cafébabel: What are your plans for your time at cafébabel?

To read and write a lot of really exciting stuff.

cafébabel: What are you working on right now?

I just finished writing an article about fighting against online harrassment. At the moment I'm working on a piece about hashtags and Internet activism, the fact that hashtags can create social movements - in the US you have #BlackLivesMatter; #Aufschrei is very common in Germany; and after Brexit #LondonIsOpen started trending in the UK. There's also one from Spain, but it's impossible to pronounce.