Soliciting is now illegal in France: bad news for punters, but a huge step forward for French society. [OPINION]

On 14 April this year, a new law was passed with the aim of "strengthening the fight against the cycle of prostitution and supporting sex workers." This law marks a shift in France towards an abolitionist approach to prostitution. Much like models adopted in Sweden, Norway and Iceland, France has decided to criminalise clients rather than sex workers, instead offering them help and support to get out of prostitution, should they wish to do so.

Why is abolition the only option?

After dabbling with systems that regulated prostitution and those that banned it entirely, it became apparent that in France, the abolitionist model (laid out in 1946 and officially adopted in 1960) which criminalises the buying of sexual services, was undoubtedly the most sensible option, leading to its implementation this year.

In the prohibition model, which bans prostitution in all forms, everyone involved can be charged. It's a model that doesn't stop prostitution, but rather forces it to go off the radar. It also mainly criminalises the sex workers themselves. It's a model used in the majority of US states and, most notably, in China.

Countries that have chosen the regulatory model, or in other words, those who have "legalised prostitution", such as Germany and the Netherlands, hold the cynical view that "prostitution is inevitable" and hope to offer women a means of "empowerment." These women are therefore seen to have a legitimate job and can contribute to society and claim social security. This system is based on the idea that women have chosen sex work as a career, as they would have any other. Guy Geoffroy, who headed a governmental study into prostitution in 2011, begs to differ. "You have to close your eyes to the reality that in today's world, prostitution is imposed on more than 90% of women and men of foreign origin, who have fallen prey to one of the worst practices to have ever existed: human trafficking."

Research undertaken by the Mouvement du Nid ("the Nest Movement" in English) points to the example of Nigerian women who arrive in France, owing debts of up to 80,000 euros to their traffickers. How can we still think that prostitution is a career choice like any other when we know that in the whole of Germany only 44 women are officially registered as prostitutes? 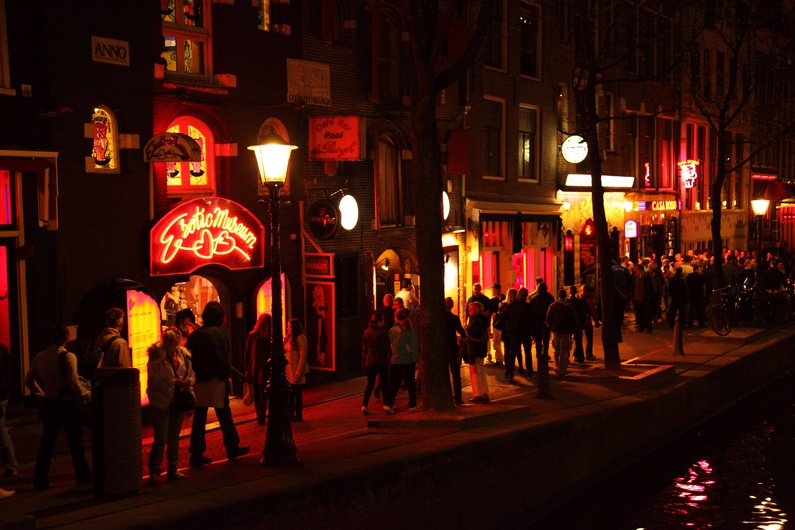 The abolitionist model, in contrast, implies the recognition of prostitution as a form of violence. It also holds the view that by considering prostitution as a career, we deprive these women of a means of escaping the sex trade. We must be careful with our vocabulary however, as "abolition" does not mean the same thing as "prohibition" or "eradication" (slavery, for example, has been abolished but arguably still exists in France in a modern form). The abolitionist model simply means putting society on the side of victims, and offering them an escape route.

"Moving away from the romanticised image of prostitution"

The April 2016 law decriminalises the actions of sex workers and ensures the "implementation of an exit strategy from prostitution" by giving a "six-month temporary residence permit to non-French citizens engaged in programmes helping them quit the sex industry," even if they do not report the network that trafficked them. They are also able to claim a minimum wage during this transition period.

During her speech last August at the Summer Camp organised by the association Osez le Feminisme (OLF), spokesperson Marie Allibert  celebrated the fact that we are "moving away from the romanticised image of prostitution promoted by politicians and the media." The reality is much darker: the world of prostitution is one of extreme violence, which starts with the first act of paid sex and continues long after. A study lead by American clinical psychologist Melissa Farley, who interviewed sex workers in nine countries such as Canada, USA and Germany, showed that 48% of German prostitutes had been assaulted or sexually abused during childhood. This study also revealed that "all sex workers interviewed claimed that they had been insulted or threatened. Thefts of money or goods by clients were equally common." Threats included "hitting, attempts at strangulation and gun violence." In Canada, 76% said they had been raped, in the USA the figure was 73%, and 63% of those interviewed in Germany said they had been raped more than five times.

At its very core, prostitution is a repetitive cycle of unwanted sex acts. A man exploits his economic power to obtain what he wouldn't have been able to obtain without it: sex with a woman who doesn't want to have sex with him, as she would otherwise not be doing it, if money were not involved. Abolishing prostitution is the only way to truly win the fight for gender equality. We must remember that 80 to 90% of sex workers are women and, as Grégoire Théry, secretary general of the Mouvement du Nid, explains: "every client of a sex-worker that we meet, whether the sex worker is male, female or trans, is a man."

If we wanted to prosecute clients, the law would be practically impossible to implement. It is easy to find articles that criticise the difficulty of realistically applying this law and the"penalisation of punters". However, in Sweden, where solicitation has been criminalised for 15 years, the chief inspector of the anti-prostitution team in Stockholm, Simon Häggström recalls that "8 out of 10 clients admit to their crime immediately upon arrest, without us even having to take them to the police station."

During his speech at the OLF Summer Camp, Grégoire Théry explained that "just two months after the passing of the law in France, before any official decree demanding the law's implementation, 140 people had already been arrested for this crime." Whether they were caught in the act or caught when soliciting services, the police were immediately able to intervene. The client had the option of immediately admitting to their crime and paying a fine, or denying guilt to later receive a court summons. Strangely enough, very few chose the second option. Maybe the idea of having to explain to their boss why they needed a day's holiday at such short notice put them off...