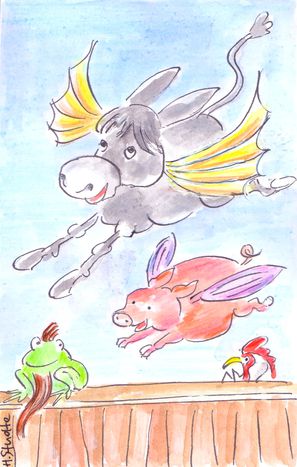 On Saint Never's day, a blue moon rises in the sky and the scene is like Noah's Ark. The creatures climb on board, in an attempt to prove that an event will never happen: they are hairy frogs, toothy chickens, flying pigs, flying donkeys, whistling crawfish and dark Germans .... it's the idiom of the week

Autumn 2009. Poland has said yes, the Irish have voted yes. As the Czech Republic stall on the Lisbon treaty, which will define a new constitution for Europe, it seems that the continent is stagnating. No-one has any bright ideas. How long do you have to wait for something to happen? The Germans weigh the evitability of an event happening by judging it on the colour of their skin: you’d be waiting until you turn black! (Warten bist du schwarz bist).

There is a veritable farm of idioms in Europe which express the impossibility of something happening and an indication of the eternal wait towards it. From the Spanish and French ultra pessimists’ points of view, something will happen when frogs grow hair (cuando las ranas críen pelo) or when chickens grow teeth (quand les poules auront des dents). The Brits and Italians launch animals through the air, waiting respectively and positively for pigs to fly and donkeys to fly (aspettare che gli asini volino). The Russians wait until the crawfish whistles on the mountain (когда рак на горе свистнет). From the fine hands of the Poles (Chopin, for example), you’d be waiting for cacti to grow (aż mi kaktus na ręce wyrośnie).

You can also cross your fingers and wait for the day of a saint: in France something will happen à laSaint Glinglin- the origin of this expression is obscure, perhaps having something to do with the sounds of bells. There is also the German Sankt Nimmerleinstag, Portuguese o dia de São Nunca and the Polish Święty Nigdy , all referring to Saint Never’s Day. So, will the Czech 'yes' to the Lisbon treaty come on the day there is a blue moon in the sky?

A shorter version of this article was first published on cafebabel.com on 5 October 2005. Updated 14 October 2009