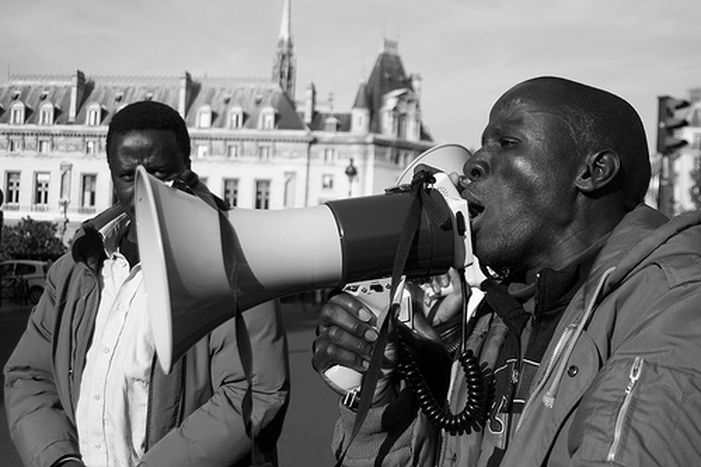 The situation for clandestine immigrants in Sarkozy's France is critical: 26, 000 expulsions were made in 2008, and 30,000 are required in 2009. This report is from the Vincennes detention centre in the outskirts of Paris

‘There were only a few of us, and around us police, firemen and ambulances came and went. From where we were, we could not see very much, just the flames lapping at what was left of the roof. We were standing behind a wall and they did not make us move, it was oppressively hot and all we could do was scream slogans, while the police told us to calm down and one of them filmed us with a television camera, saying Smile! Got you! – we screamed at him but we didn't see anything more and after a while, we left the way we had come, in small groups.’

'One of the police filmed us with a television camera, saying Smile! Got you'

Anne is a member of the Réseau education sans frontière (‘Education without Borders network’, RESF), an association which militates against the expulsion of foreign minors from French territory. Her testimony confirms the inaccessibility to civil society common to the European centres to which immigrants are confined before they are expelled.

Anne and the others watched from a distance on 22 June 2008, the day on which fire ravaged the Vincennes Centre de Rétention Administrative (‘Centre for Administrative Retention’, CRA) in the Paris suburbs. The cause of the fire at the centre, which has been empty since then only to re-open partially in November, has not yet been established. ‘In summary, following the death of a Tunisian (the autopsy, which was never made public, talks of cardiac arrest without saying anything further), the detainees became agitated,’ explains Cécile of the Cimade, an association charged with guaranteeing the foreigners at the CRA the effective exercise of their rights. ‘They then asked for explanations which must not have been given: the next day, a violent brawl with the police broke out and then someone set fire to a room.’

While the element which triggered the revolt was the death of the detainee, the Cimade has been speaking out for some time against the difficult conditions in which the detainees in Vincennes are living. In its 2007 report on the CRA, the Cimade explained that the centre, which has two sites with 140 places each and enough police personnel for only one site, small rooms, little space for walking around and very little human contact, ‘is an almost prison-like universe which generates all sorts of violence.’ Sarkozy's ‘numbers’ policy (26, 000 expulsions were to be carried out in 2008), resulting in a mechanical, restrictive application of the laws, has filled the CRA to the maximum, to the exasperation the people confined there. The Cimade's report warns that 2007 ‘was a difficult year which risks becoming the first of a long series if the administration does not realise the gravity of the situation.’

Industrialisation of the detention of illegal immigrants

The Vincennes CRA was the biggest in France, a true symbol of the industrialisation of the administrative detention of illegal immigrants about which the Cimade has spoken out. ‘The logic behind the realisation of Sarkozy's policies,’ explains Nicolas Fischer, a researcher at the EHESS (Ecole des Hautes Etudes en Sciences Sociales or ‘School for Advanced Studies in the Social Sciences’) in Paris, ‘is that of productivity; providing figures on the number of foreigners to be expelled requires the state to be committed to maintaining that objective.’ The danger with this logic is that the rights of the foreigners in question are considered to delay matters.

The Cimade's presence in the CRA, which is regulated by a convention originally drawn up in 1984 between the association and the state, is being threatened by the intention to establish competition between more organisations. ‘In the name of the transparency to which every state which calls itself liberal should tend, the government wishes to multiply the number of candidates for providing assistance to the centres, but it will only choose an association which, among other criteria, respects confidentiality. What this means is not clear: are the abuses denounced by the Cimade or sensitive information which is often decisive in showing that a foreigner is being unjustly detained in a centre, considered to be confidential?’ The other risk is that, if the CRA is divided into different lots on the national territory, the Cimade's global overview of the state of administrative detention, which has been described until now in their annual report, will be lost.

Despite criticism, the generalisation of the detention of illegal immigrants is becoming a mainstay of immigration policies in Europe. However, the function of detention centres is uncertain: the states from which the immigrants originate often do not provide the authorisation necessary for the re-entry of the illegal immigrants, and the expense of the administration and structures involved in the expulsions is constantly rising.

In France, the journalist Carine Fouteau has estimated these annual costs at 700 million euros (£638 million). The result is that immigrants often leave the centres with a document ordering them to leave the country through their own means. ‘Everyone knows that many of the illegal immigrants will not leave,’ continues Fischer. ‘But in the meantime they have been identified, and the invisible population, estimated at 350 000 people in France, has been partially quantified.’ Meanwhile, Vincennes is to re-open with even more places; this is inevitable, given that 30, 000 expulsions will be carried out in 2009.