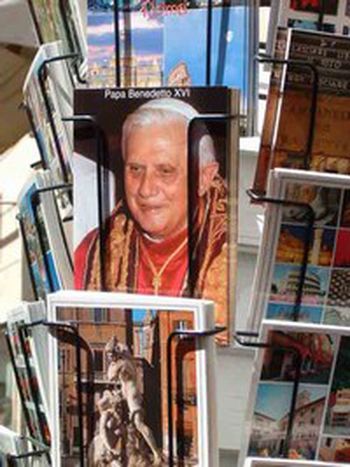 The road to hell is paved with good intentions

The choice of pope has been a disappointing one for some and now that the smoke has dissipated, the mudslinging has begun. Benoit XVI will have to work hard to show he’s not as bad as he’s made out to be.

During the first weeks of his pontificate, Benoit XVI, whose reputation as a man of iron precedes him, has given us a glimpse of his ambitions: to continue the ecumenical work of his friend and predecessor Jean-Paul II; and to adopt a theologically conservative line of action completely opposed to the wishes of the majority of people at a time when the Catholic church is suffering from ever decreasing public support. This is quite a turnaround for a man who, forty years ago, was deemed a revolutionary for his active role in the Second Vatican Council, which reformed the functioning of the Church. His attachment to the theories of the conservative Congregation for the Doctrine of Faith is all the more worrying considering he once passed as the destroyer of a Church too antiquated for the modern world.

A pope in the image of man

On every continent we yearned for a ‘human’ pope, aware of our worries and our struggles: a pope who would help his Church to evolve. But instead we got an intellectual with a doubtful past and an unpleasant image, who will have to employ the best spin doctors in order to orchestrate the great ‘operation niceness’ that aims to make him...human? But it seems that certain mechanisms have already been set in place so that the pope, from his very first day, could make a good impression. In front of the citizens who come to welcome him, Benoit XVI has shown himself to be cheerful and confident; very different from his former shy persona. His performance at the time of his first homily was in itself reassuring for many Catholics. Thus the tools of efficient communication and his new name have already given the man formerly known as Ratzinger a head-start in his mission to appeal to the people.

Jean-Paul II knew how to provoke immeasurable and unequalled waves of papal enthusiasm wherever he led his combat for peace for mankind (over the Cold War, communism, capitalism, terrorism, genocide...) and for peace among religions (notably among Jews, Protestants and Orthodox Christians). But Benoit XVI should not go down that path. Instead of thinking only of the opening of the Church, it is time for the pope to concentrate on his own people, to reflect on the evolution of society, to propose changes to the Doctrine of Faith. Because without the support of the Church and its followers, the pontificate does not have any point. And so, as he said during his speech before the Catholic Academy of Bavaria “Why am I still Christian? Because it is only within the Church that it is possible to be Christian, and not outside.”

Action is needed to make sure that his preoccupation with his image does not detract from taking concrete measures too look after fellow Catholics. A lot of people are hoping that the new pope will bridge the divide between his Church and his era and that, thanks to his unbelievable and unequalled power, will save Africa’s men, women and children who suffer and die as a result of the Church’s doctrine banning condoms; without help, without God, and without love. What possible human value can this doctrine have? It seems to me that if Benedict XVI accepted that faith is not simply about rules and their draconian enforcement but also love, everything would be much simpler. Exactly as the words of Jean Paul II were able, in another context, to influence the course of history and change human life the new pope needs just to say the word and Africa will be cured.

I have difficulty in believing that the recent introduction of an email address for the pope or the promotion of his fan club will be enough to make of an exacting theologian a pastor close to his people, full of love and compassion for his sinful flock. All this has more in common with a huge communication operation than the dawning of a spiritual era. Will we be able to petition by email for permission to use condoms without risking excommunication? And so for Benedict, rather than ‘operation niceness’, it will be ‘operation listen to the needs of Christians’ that will help him gain public acceptance. Let’s hope that the former Cardinal Ratzinger, nicknamed “God’s Rottweiler”, will be able to make the human choice.