The naughty child of Europe

In recent days, Viktor Yushchenko’s supporters have been looking hopefully towards Europe, only to be disappointed. The very idea of including Ukraine in the European Union has barely crossed the EU’s mind 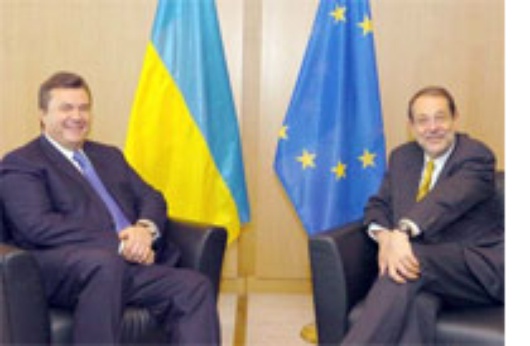 The EU has held itself back from the Ukrainian presidential elections for far too long. While Bush sent a special ambassador to Ukraine in the run-up to the second round of the elections, not a single top-level EU representative travelled to the country to offer symbolic support to its emerging democracy. Support on the part of these democratic powers did not extend beyond a European Parliament Resolution. This resolution, agreed on 28th October 2004, simply stated that the Parliament was concerned over the events of the first round of elections and called for the second round to take place without delay. It was as though the Parliament did not want to upset its Russian partner by calling too strongly for the Ukrainian people to be given a free choice. But trying to influence Ukrainian voters to vote for the EU’s preferred candidate, Viktor Yushchenko, is neither necessary nor useful – the Ukrainians do not need yet another world power telling them what to do. Rather, they need a European neighbour, which will support and aid them in their desire for more democracy and in their wish to become part of the European Community.

The end of rapprochement?

Ukraine’s interest in joining the EU has long been clear. After the collapse of the Soviet Union, Ukraine was the first of the newly independent countries to sign a Partnership and Cooperation Agreement with the EU. The agreement was concluded in 1994 and entered into force in 1998. Up until Prime Minister Viktor Yanukovich cancelled this step in the run-up to the elections, Ukraine had confirmed its intention to join the EU in its military policy. The desire for closer links, which would go beyond those of the EU’s neighbourhood policy, was voiced by Yushchenko and his top-level supporters, all of whom are very much western-oriented. However, the EU has put clear limits on this rapprochement, and that’s without even having considered all the other possibilities. At the EU-Ukraine summit held in Yalta on 7th October 2003, it was made clear that all efforts would be made to include Ukraine in the single market, but that opening up accession negotiations was out of the question.

A bridge between Brussels and Moscow

The EU appears to be forgetting one major fact: a stable, democratic Ukraine is of vital significance for a stable Europe as it strategically positioned between Russia and the EU. However, Ukraine can only be democratic when it is led by Yushchenko and his democratic team, and not shaped by the existing authoritarianism of Kuchma and Yanukovich. In order to not betray the trust that Ukraine’s new team has shown in the EU and the values that it has demonstrated, Ukraine must be given the prospect of EU accession. It must see that there is a distinct possibility of opening up accession negotiations. Of course, Ukraine is still far from ready to join the EU but - since there is talk of opening up accession negotiations with Turkey and the Balkans and the Ukrainian people have shown us on the streets that they are prepared to use peaceful means to fight for a democratic and European future for their country - it is time for the EU to start reconsidering its future relationship with Ukraine.

The EU mustn’t balk at potential clashes with Russia, such as those which emerged at the EU-Russia summit on 25th November. A Ukraine that is fully integrated in Europe would not be a stand against Russia. In fact, the very opposite would prove true. Ukraine would be a vital, democratic link between the two powers with which it shares history and culture. This is why the EU needs to threaten Ukraine with sanctions, more so than it has done so far, in case the election does not take place in accordance with OSCE standards. As the EU is the biggest contributor of funds to Ukraine, having given one billion euros since 1991, it would be justified in following this course of action.

The EU was far too late in calling for the election to be reviewed on 24th November. Treating Ukraine like a naughty child showed that the EU had not fully grasped the signs of the times. OK, so Javier Solana’s efforts brought the two parties to the negotiating table, but getting Kuchma and Yanukovich to agree on holding new elections was certainly not down to him. It is time for the EU to open its eyes and offer Ukraine a real alternative to authoritarianism and Russian control.