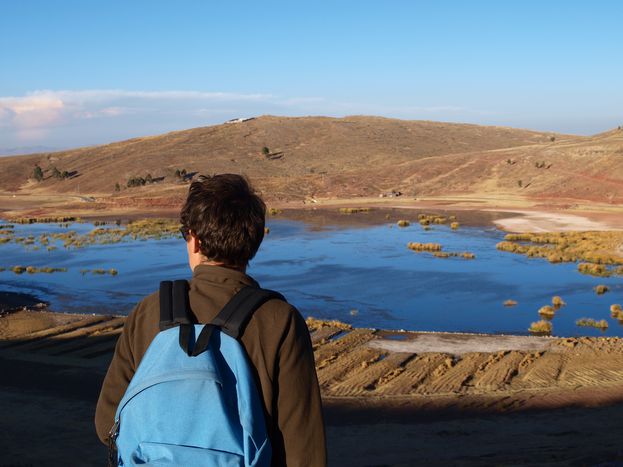 The Geography of Migrants and Tourists

Will we make our dreams come true or will we sink in this deep sea?

I remember the Monegros Desert in Spain. To me, its vastness seemed utterly beautiful; it recalled the freedom of Latin America and the strength of the Sahara.

Sitting in a bar in Casetas, a few kilometres from Zaragoza, I decided that I needed to go there. Some guys asked me why I should bother going in search of a dry and isolated place.

But I wanted exactly that: nothing.

A break, a walk with my friends.

Las Bardenas Reales and El Planeron are incredible places. Mountains of dry earth that seem like pyramids. There we played football and pretended to be in Mexico and Peru, making promises that we will never lose eachother and will always remain friends.

The locals told me that the long periods of drought are a tragedy for local agriculture. Here, in the 1930s, the bloodiest battles of the Spanish Civil War were fought. Belchite, utterly destoryed, represents the memory of those who died for their homeland, fighting against Francoism.

We sat in a car that was completely destroyed and pretended to travel to distant ports. We entered a roofless church and looked up at the sky.

The guide said that the voices of ghosts who populate these areas can still be heard. We tried to listen out for them but heard nothing. The spirits had nothing to tell us or maybe it was we who were incapable of comprehending and listening.

I rememeber the sea and the beach at Sanremo and Cap du Dramont with the bikes passing by, the bay of seagulls, and les falaises rouges.

We bathed in the water and wondered about what our futures hold.

Will we make our dreams come true or will we sink in this deep sea?

Then we thought about it:

"Let's take one of these black guys at the edge of the road walking barefoot or with broken shoes, and take him from there with us!"

We hesitated for a moment. To us the experience seemed beautiful, strong, human.

I thought about one of my favourite songs and I cried:

But we couldn't. We couldn't risk going to jail.

Too bad. A chat would have pleased us.

We then dreamt about travelling to Francophone African countries.

We who met in Paris and Brussels. We who love studying geopolitics, philosophy, anthropology, and literature. We who love the Musee de l'Afrique Centrale in Tervuren and the Musee du quay Branly.

We looked at the yachts belonging to Russians and Arabs just after the border and it semmed that all the contradictions of the world materialised in a moment. They were here for us and for all those who wanted to see them.

We all crossed the border. Some swimming, some in a car, and some in twenty-metre boats.

The Italian police moniter the coastal area from Ventimiglia to Menton with binoculars.  On the other side is the French Gendarmerie nationale. No one can joke with them.

They were not looking for us.

I remember the summer on the African coast in Sicily. Agrigento: one of the most beautiful places on earth with the Scala dei Turchi, the mouth of the Platani river, and the Greek ruins. My family are from these areas and I grew up here.

A North African man made a sign with one hand. My uncle approached him to see what he wanted. What he told us was brief and ungrammatical:

I was only ten years old and I didn't know much, but I knew the distance between Sicily and Piedmont. Something wasn't right.

I remember the Middle East. Jordan full of Syrians, Palestinians and Egyptians. The refugees squeezed together in the confines of the north. I remember the afternoon in a truck with ten refugees who told me about their adventures, their fears, their dreams.

In the Dead Sea, the world's saltiest place and  lowest elevation. These lands existed before Jesus and will exist long after those who seek fortune, seek to escape bombs, seek to escape poverty.

Here man was born and here he will probably die.

I remember the days in Bardonecchia.

Will we arrive at the end of the track or will we get lost in the Alps?

The mystery of the mountains. Tall, icy, unfathomable.

Yet people were crossing them.

Some on foot, some in cable cars, some in ski lifts.

They were going to France, beyond the border. They were trying to leave.

Even they wondered about what will become of their future.

Who knows where they were going and why.

Wherever we went, I wondered whether we were following them or they us, and if this seemingly casual meeting was not, in reality, a metaphor for a common and shared destiny.

Maybe they were the same voices of the ghosts in Belchite that we didn't have the ability to listen to.