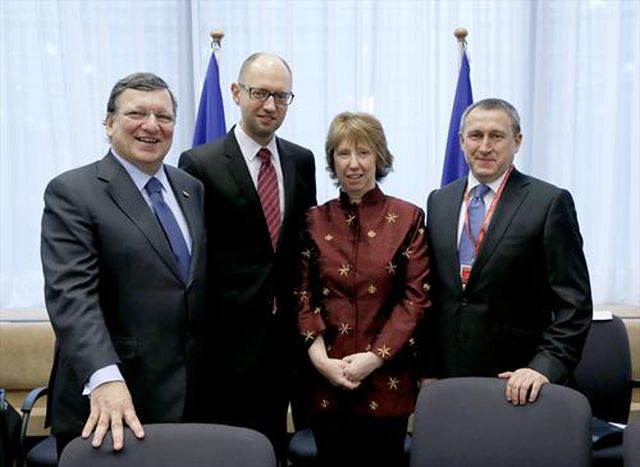 The Chinese puzzle of Ukraine at the European Council

(Live from the Summit)

Reunited yesterday at the European Counsel with the objective to approach the subjects of economy, finances and energy, the twenty-eight heads of State and governments received a surprising guest –not that surprising- monopolizing the discussion. It was of course about the Ukrainian crisis.

It is convenient to underline the “historical” agreement that the twenty-eight finally reached, concerning the Banking Union and the lifting of banking secrecy.

This positive attitude was a bit tainted at the beginning of the inquisition concerning Ukraine. Brussels shows a union that is decided in their attitude against the Russian Federation; one can only find a little prudence, translating the limit of European diplomacy, because the national interests will always be the priority for many.

“Ukraine has been brutally assaulted; the integrity of her territory has been violated.” Martin Schulz, president of the European Parliament, joined the assembly of the heads of State and governments to denounce the illegal annexation of the peninsula by Russia.

After the announcement, some hours earlier, a lengthening of the list of people affected by the sanctions (assets freeze and visa ban) y the U.S., Europeans aligned.

There need to be harder measures taken already in response to the “false consultation” of the Crimean population, François Hollande declared. The sanctions of two out of four stages have already been subject to such a list, and thirteen names remain to be added. It will be unveiled today, but unsurprisingly, it will have to overlap the American one.

Russia does not care. They have already qualified, via the vice-president of the Doma, those sanctions that “only serve to make some noise”. It responds even today with a list against the American leaders. Other measures have been decided like the cancellation of the EU-Russia Summit in June and all bilateral meetings scheduled over the same period.

The European Union insists: it is about gradual sanctions. “Russia needs to understand that they cannot continue, that they need to find a way to have a dialogue,” declared the head of the French state yesterday. The twenty-five are clear: it is not wished for a military intervention.

A declaration that responds to the one made by the United States and searches very clearly to moderate the last declarations of the general secretary of OTAN; Anders Fogh Rasmussen. Europe, which is heavily dependant on Russian gas but also their investments in many different sectors, like the stock market and the real estate market, has too many interests to risk such an extreme intervention.

Meanwhile, Brussels prepares for an “escalation” and has appointed the Commission to provide more severe sanctions, of the third stage. This component is also part of the appeal which was the strategy of the twenty-eight.

The EU stuck between firmness and prudence

This very diplomatic approach, which can even be called symbolic, has already been criticized by the Ukrainians who demand more severity. More because of inefficiency or lack of resources, it is the national interest and interdependence of these two forces that dictate the strategy.

“Russia is too important on the international scale,” according to Martin Schulz, evoking the Syrian and Iranian issues, and Russian influence within the UN.

Also, it is certain that the stage three sanctions will have dramatic economic consequences for all the State members, that “are finally getting out of the crisis” according to Mister Barroso and Van Rompuy. Therefore, François Hollande has confirmed that the position of the two Mistral warships have been maintained for the time being.

A little change in the European strategy which will, if it hardens concretely, risk to be confronted with the eternal dichotomy: communitism against nationalism. The united front of the Union may well crumble at the discretion of national interests and lose all credibility on the international scene.

The heads of State can now only hope that a change in the attitude of Russia will save them from that situation. A rather particular hope has been invested in the European Security Council, which must, once again, deploy in Crimea, “in the best of times”. In case of blockage, the heads of State will announce a mission of the EU. Never mind the efficiency, how can the Union succeed where their organization for security and cooperation has already failed?

The European Union confirmed this morning their support towards Ukraine, signing the political aspect of the association agreement at a time when the Duma has ratified the treaty integration of Crimea. It’s in this context that president Obama comes to Brussels for the first time, this Wednesday the 26th March. Can you bet that Ukraine will be on everyone’s lips?