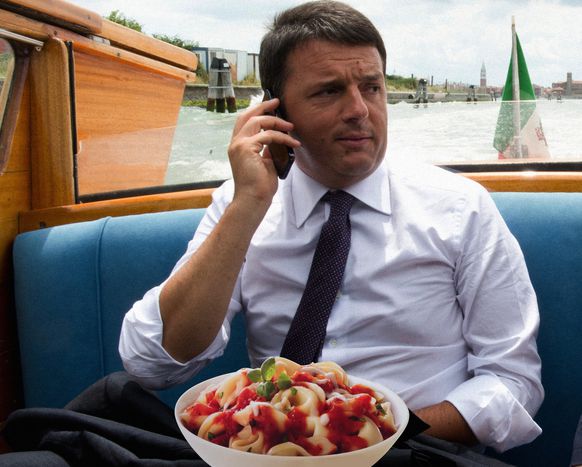 The “5 camisados of the European socialism” and the Tortellini deal

Is there room for socialism and left-wing policies in the austerity-driven and financial cuts-vexed Europe? In Bologna 5 leaders wearing white shirts sealed the “Tortellini deal”, the instrument of constitution of the European center-left new marketing.

“White-shirted International”, “Eurorenzism”, “Eu-Dem” deal. There’s a plethora of definitions, but Bologna’s meeting of these “camisados of the new European socialism” meant a new and unprecedented step for the Old Continent’s left, many years after Berlinguer, Carrillo and Marchais’s Eurocommunism or the Gonzales-Craxi-Mitterrand agreement.

In a Europe driven by austerity and “blood-and-tears” maneuvers, or bent by the infamous structural reforms of labor market flexibility, how can socialist policies be achieved? Really, how can one still be from the left? More than a question, it’s a fixation for this European socialism in pursuit of identity and answers.

Unfortunately, it seems like this question shall go unanswered for quite some time or quoting Manuel Valls, who argued with his colleague Martine Aubry about the austerity policies, “What’s the alternative?”. Amidst all these doubts, the answer given by the European socialism – ever farther from its origins, from its people and its past – seems to be the European center-left new marketing. And Bologna’s show is merely its instrument of constitution.

A family picture bound to enter the annals or to sink into oblivion: “Matteo”, the French “Manuel”, the Spaniard “Pedro”, the Dutch “Diederik”, the German “Achim”. Everybody standing on a stage talking to each other using their first names, brought together by the firm belief that a change of course is much needed and that a common path must be undertaken after joining forces. All of this while being happy to be part of a new left characterized by “Europtimism”.

The new Lady FASP (High Representative of the Union for Foreign Affairs and Security Policy), “Federica”, in her TV host-like version, announces the guests and indulges in a little joke: “I’ll be your TV assistant for the night…”. The handsome forty-years-old group dressed in white (and Sanchez really does look great) venture in set phrases, clichés, jokes and even unexpected slogans such as a Guevara-nostalgic “venceremos” uttered by the German Post or a “comrades” by the Spanish Sanchez. Two of the five leaders (Valls and Sanchez) spoke in Italian, one bemoaned his old Europe (Samson) and everybody looked up to Matteo with admiration. The host showed them the way, he is the master who brought his party to a stunning 40%, to unprecedented heights. “You are very lucky to have a PM such as Matteo here in Italy” claims the Spanish socialist party leader addressing the audience.

«The future is a wonderful place, let's go there together»

And the socialist leaders sealed a deal, called the “Tortellini” (Bologna style), in the Bertoldo restaurant. As if reiterating that this is a matter to be taken seriously, but not as seriously as those other guys do, those old people who struggle with communication and lose the elections or simply go down with the whole ship like Hollande in France, Zapatero in Spain and the leftist Italian old guard. And apparently this – even before any alternative or solution – is the secret to change the fate of the European center-left party and of the whole Continent: the leftist new marketing. Renzi’s lesson, who learned it all from Blair, is yet again the power of words, the communication mastery, the creation of a winning image, a “brand”, to use a word borrowed by the political and electoral marketing.

And so the PM plays the role of the host, the master and the showman in this Festa dell’Unità (a social-democratic celebration in Italy) which, at least for an hour, becomes some kind of “International Leopolda” (from the name of the Railway Station where Renzi’s supporters gathered to share their thoughts on current affairs). When the meeting came to an end, Matteo uttered one of his sentences, half way between poetry and hope: “The future is a wonderful place, let’s go there together”. The thing is, nobody knows how.