Spanish election debate: Much ado about nothing

The Spanish election debate ended up as a series of interminable monologues from which original ideas were completely absent. Faced with a certain electoral exhaustion, none of the candidates dared to be adventurous, perhaps in order to conserve their existing voter bases. Opinion piece.

The televised debate between the four Spanish candidates for the 2016 elections was expected to be historic, due to the fact that, for the first time, the sitting President from the Popular Party (PP) would not only confront his traditional rival from the Socialist Party (PSOE), but also the two newly emerged political organisations, Ciudadanos and Podemos.

Nevertheless, contrary to expectations, the debate lacked any truly memorable moments. With a very restricted format, moderated by journalists and divided into three policy blocks (the economy, social policy and institutional reform), the candidates, in lieu of debating, espoused their ideas with little intervention or rebuttle from their adversaries. The time alloted for each section was restricted, so moderators were able to nip any glimmer of confrontation squarely in the bud.

The messages of the four leading political parties have barely changed since the last round of elections in December. The PP proclaims itself responsible for Spain's recovery, while PSOE states that it's the only choice that guarantees change. Ciudadanos presents itself as the champions of regeneration and relies on their star proposal of introducing a single contract. Podemos again highlights the need for increased public spending.

Only in the institutional reform section, which included discussion of corruption, did the tone of the debate heat up. Surprisingly, Albert Rivera (Ciudadanos) addressed his criticisms to President Rajoy, which caught the PP leader off guard. Meanwhile PSOE and Podemos were embroiled in their own war. The Socialists made it very clear that Pablo Iglesias prevented the implementation of a government of change in March by rejecting coalition proposals. "Pedro, you've got the wrong rival," replied Iglesias in a murmur that became the talk of the night. 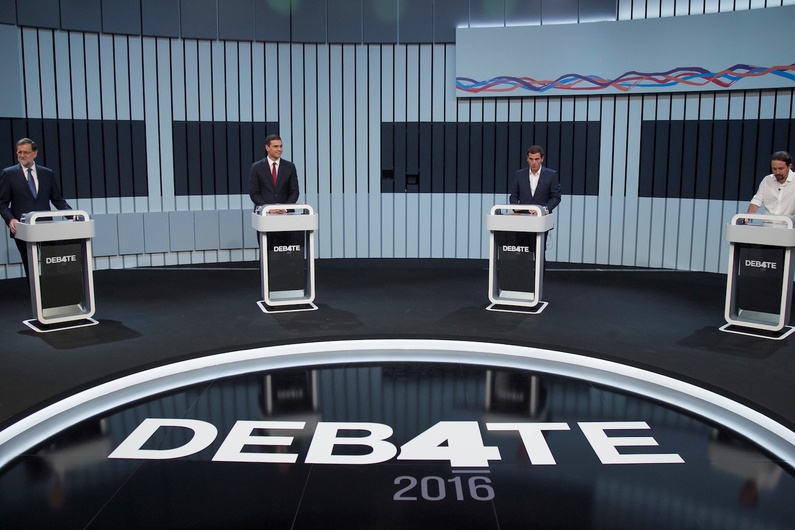 The increased tensions experienced during the corruption discussion came to nothing, and the debate ended in yawns. Afterwards, it was the little details, such as Rajoy's table full of post-it notes or the journalists' inability to guide the debate, that became the hot topic of every Spanish household.

It's a pity that, as Spain's next four years are at stake, important subjects such as male violence were glossed over (it took up 22 seconds of the debate). Something similar happened with the discussion surrounding hosting refugees and European policy, both of which were only superficially tackled. The lengthy and tedious debate finished after midnight, just as the need for a more rational hours in Spain is in the midst of discussion. One argument is to copy good practice from Europe, in order to finally encourage parliamentary reconciliation. Spain continues without an agreement, just as it continues without a debate, and without being confronted with real ideas. It's clear candidates avoided a spirited debate, because at this point they think they are more likely to lose votes than win them.

The question is whether it's in anybody's interest for citizens to go to the polls on the 26th of June with so much disillusion, given that, six months after the cold December elections, this sunnier June offering paints a broadly similar picture. Granted, there's the added mystery of whether there will be a "sorpasso" [Italian word meaning overtaking, here referring to an electoral advantage, ed.] as Unidos Podemos confronts PSOE. Perhaps the lack of confrontation during the debate means someone will reach an agreement?