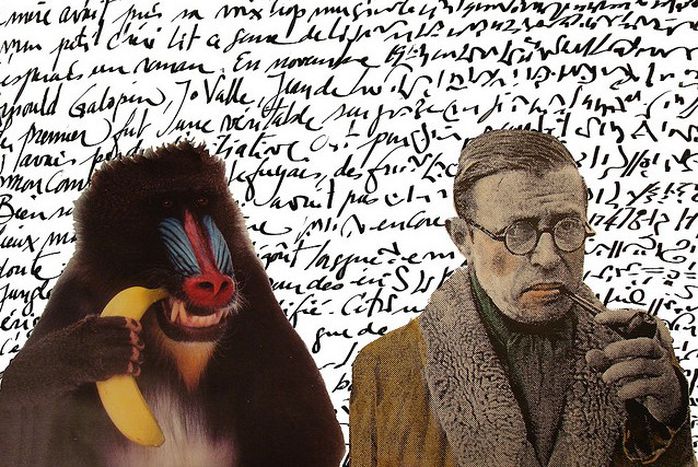 Anyone coming to Jean Paul Sartre’s ‘No exit’ (Huis clos) playing at the Lucernaire theatre until 10 September shouldn't expect a tedious and stiff evening. French director Vladimir Steyaert surprised the entirely young audience with a contemporary, ironically serious version of the classic, which of course, had to have an international cast 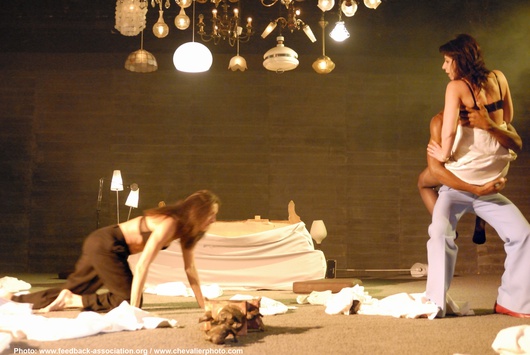 The journey to hell is remarkably quick. The ‘Highway to Hell’ would be the last thing to spring to mind when you arrive at the highest floor of Lucernaire theatre; particularly when you enter a room with three white sofas and grand chandeliers. But clearly: appearances are deceptive! Because it’s well-known that Sartre’s most famous play takes place in hell. Garcin, Ines and Estelle find themselves, one after the other, in hell. Having to stay awake for eternity and ‘live’ together in the smallest of spaces pushes them to their limits, until they finally have to admit their weaknesses and recognise that it isn’t the place but other people who are hell. So far, so good.

In the Parisian production the spectator’s bewilderment is strengthened through neon green lighting and rock music in the style of AC/DC, and is driven to the extreme by the appearance of the devil in a white flannel-diamante dressing gown and stylish Ray Ban clubmaster sunglasses. Hell in a nightclub? I’m right there! But whether you want to be or not, the audience finds itself not only there, but also right in the centre of action, with occasional shreds of clothes flying past them.

Sound engineer Fabrice Drevet, member of the Comedie Saint-Etienne (the theatre, founded in 1947 in Saint-Etienne, is one of France’s first national dramaturgical centres), sounds a droning noise throughout the entire play, which emphasises the sense of unease in the hellish place. The thudding Hells Bells played both at the start and at the end of the play give a rocky and satanical touch, appreciated by the young audience.

‘In the theatre circles in which I find myself, Sartre is considered past it – he’s simply gone out of fashion,’ explains the director - with good reason. ‘His language hasn’t aged well. We have tried to deal with the problem posed by the dialogue. The three white sofas give off the impression of a chat show, although this isn’t the case at all. This is about theatre – it is a communicative, even an erotic play.' His Sartre is timeless – the director has distanced himself from the classic and form-bound vision of Jean Paul Sartre. ‘We’ve played for school groups a few times in Saint Etienne to see their reaction. The play really did speak to them. Of course, they got louder as soon as the actors undressed. But they were really into it, I hadn’t absolutely expected that.’ No wonder, because the scenes at the gateway to hell get hotter and hotter. 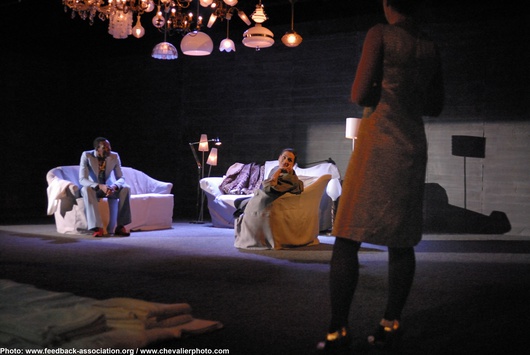 Through the international casting of actors from Togo, Romania, Croatia and Germany and the keeping of their original accents, audience members naturally build up a relationship with what is going on. They also enter through same door as the actors - but warning, this isn’t a play for claustrophobics! What else could you expect when there is ‘no exit’?

Vladimir Streyaert had already worked with Roger Atikpo, who now plays Garcin, and admits that the international cast wasn’t necessarily planned. The actors were allocated to him by the Comedie Saint-Etienne and this – despite initial language barriers – proved to be extremely advantageous. ‘The French language isn’t easy. I learned it at school but I’d never lived here. I’ve only been here since September,’ the Romanian actress Adela Minae, who plays Estelle, admits quite openly. Hats off, for the roles are challenging not just linguistically but also physically. The good atmosphere within the team is obvious onstage. The harmony between the actors despite their different origins won’t be the only reason why Minae claims she’d like to act in the play ‘forever’.

‘The French language isn’t easy. I’ve only been here since September’

Intermittent bursts of anger and interjections in the actors’ native language demonstrate the production’s authenticity and project the audience into another world, one which isn’t without laughter. As the temperature rises – almost the only indication of the classic picture of hell – the actors expose themselves in the truest sense of the words. With smeared make-up, torn off clothes and disheveled hair, their true identity is also finally revealed. The appearance of the place is deceptive: ‘Hell is - other people!’

'No Exit' is running at the Lucernaire theatre, Paris, until 10 September