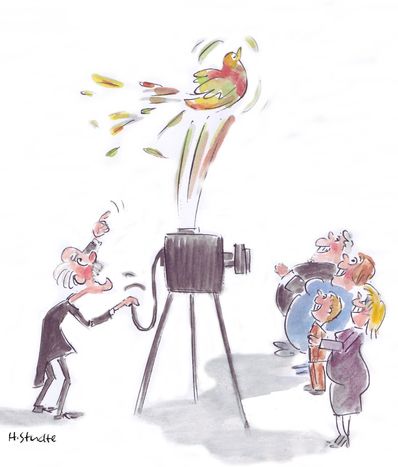 We would all like to cut a good figure or 'far bella figura' as the Italians say, particularly when the whole thing is going to end up on Facebook. What tricks do Europeans have to get people to smile for the camera?

It’s true, there are those of us who prefer to stare out of snapshots with the soulful intensity of an emo kid, while others cultivate a pout worthy of Angelina Jolie, but such photo fads come and go. It’s always the smiling snapshots that end up on the mantelpiece. The snap-happy all over Europe face a constant struggle to conjure up smiles on people’s faces.

When it comes to group portraits, the photographer needs to a cross between an animal tamer and a holiday rep. Gleich kommt das Vögelchen!

or (look out, the little bird is coming out), while the Italians grab for attention with guarda, che arriva l'uccellino!

or (look, the baby bird is coming). What is the origin of the ubiquitous fowl?

The first camera boxes were reminiscent of nesting boxes; more resourceful photographers built a little metal bird whose wings were made to flutter using water pressure. It wasn’t just children who were captivated by the little bird for during the exposure time however. In English, watch the birdie!

is still said to this day. Equally, the Spanish say ¡Mira el pajarito!

Usually, it’s words with long ‘e’ or ‘a’ choral sounds that are used to help coax out the pearly whites. The most successful export is the English word cheese

; the Russians use Сыр for a cheesy grin. The Poles say zaubern ser (cheese) or seks(sex) to try and spur a smile. German children giggle when they’re made to utter profanities such as ameisenscheiße

(ants’ shit). The French laugh at the thought of an ouistiti

, a marmoset, and in Spain they smile at ¡Patata!

Perhaps such hackneyed phrases are more likely to produce a grimace than a grin. Although one glance at the grim faces coming down any catwalk would tell you that the maudlin look is right on trend...