Roma: It's not black or white

It seems that discrimination against the Roma community in Germany is still on the rise. They are calling for a 'right for all to stay' as the authorities send them back to their homelands. One of the aims of the first World Romani Congresses was to create a more integrated society. But has this been successful?

The atmosphere at the demonstration in April in Berlin for the Roma community shifted between one of anger, frustration and belligerence. A motley crew gathered at the Neukoellner Hermannplatz, and prosters held giant banners with Roma flags and slogans such as 'All Roma to stay'. The colourful and noisy protest set off, accompanied by police officers. As the group was tailed by a yellow pick-up truck and lead by giant speakers, the protester's powerful words pierced the morning air.

The Romani are the largest ethnic minority group in Europe, many of which come from the eastern and southern parts of the continent. 'Roma' is an umbrella term used to describe a group that shares similar cultural characteristics, and includes the Sinti. Most of the Roma who live in Germany have lived there for many generations and have German citizenship. They do not benefit from special support programmes, and consider themselves well integrated, according to the Germany's 2011 report to the European Commission.

In his 2016 study "Die enthemmte Mitte" [NB. "The Uninhibited Center"], Johannes Kiess - research associate at Siegen University - examined German attitudes towards Roma. The research was based on state-wide investigations on right-wing extremist attitudes in Germany. While the acceptance of right-wing extremism declined, another problem arose: "We are moving away from traditional xenophobia and antisemitism and towards a more specific devaluation of people. There is this dichotomy of 'good' and 'bad' foreigners, and the Roma, refugees and Muslims fall into the latter category." These groups are categorised as such because of their supposed 'negative qualities': "Roma are perceived as a threat to prosperity," says Kiess.

Georgi Ivanov, a coordinator of the welfare advice service Amaroforo, says that it's not really possible to define the Roma as a single group. Amaroforo is the Berlin association of the AmaroDrom community, which mobilises Roma and non-Roma, allowing them to participate in community life.

I am embarrassed to be Romani

Another obstacle for the community is that many find it difficult to identify as Romani. Safeta Zwietasch from Amaroforo was reminded of a young boy who did an internship with them, who was "embarrassed to show his internship certificate because the association works for and with the Roma." On the contrary, being a Bosnian native herself, Zwietasch has been open about her Romani heritage ever since she started working for the organisation. "Before, I was concerned that I could lose my job and was worried that my child would be bullied at school. Now I like to show my allegiance to the Romani people."

It seems, however, that discrimination only affects those who have certain physical features, which is in line with the 'foreigner' stereotype. "If a Romani person is blonde with blue eyes, then they simply won't face the same level of discrimination," Kiess explains.

In Berlin, the focus is set on making sure a ban on deportation is implemented. According to Statista, the statistics portal, the Roma population in Germany has about 120,000 people. This is only an estimate, however, because since the end of World War II, socio-economic and demographic data have not been collected on the basis of ethnic affiliation in Germany, and no data has been recorded in the Civil Register on this matter. Legally speaking, identifying as Romani shouldn't weigh on a citizen's status in Germany.

Nonetheless, Roma mostly fight for their rights as Roma people and less so for their rights as Romanians, Serbians or Albanians. This is due to the fact that, not only are they the largest ethnic minority group in Europe, but also because they are the community most often subjected to discrimination. According to Marijo Terzic, manager of the Duisburg Integration Centre, discrimination can occur anywhere and in any situation.

Perhaps the Romani people's fight for their rights can be linked to Germany's past of preferential treatment for specific groups of people, during the time of National Socialism. Time and time again, at protests in Neukoelln, the responsibility of the country towards the Romani people has augmented. Protesters believe that Germany is obliged to offer them the right to freedom of movement and the right to housing. 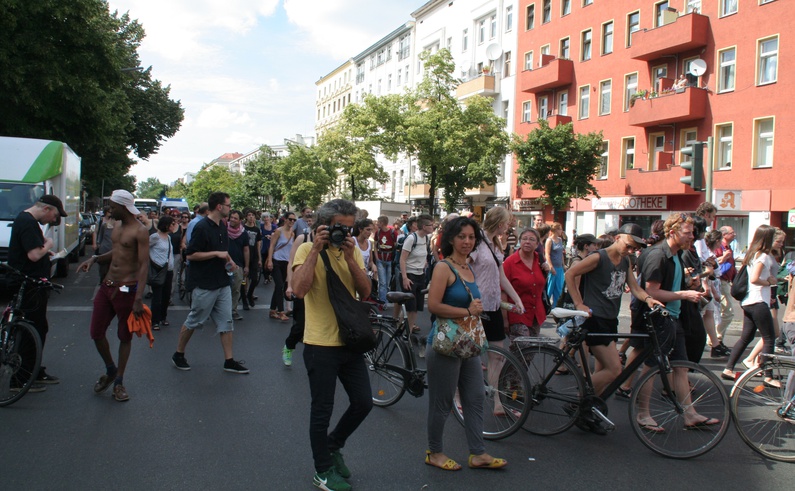 Marijo Terzic works in Nordrhein-Westfalishen Duisburg, a hotspot for Roma migration flows from the Balkans. He believes that: "The state is stripping itself of responsibility and handing over the integration work to the local authorities, who are struggling to keep their heads above water. We are overrun with Roma coming here for language courses and we simply cannot work quickly enough to meet their needs," he says.

Authorised or not, the measures for integration are the same for everyone, regardless of whether or not they are Romani. The main focus of the integration strategy is: "... education, education, education. Giving children a chance, further down the line, to access traineeships. And with regards to adults, integration into the job market is enormously important."

Georgi Ivanov takes a similar stance when it comes to matters of self-sufficience: "You need to be proactive.  If you simply sit at home, complaining, nobody is going to be able to help you - integration is a two-way process." He believes the fact that so many Roma are locked outside of the job market is one of the biggest problems concerning integration. This is because Roma who come from non-EU countries, although 'tolerated', are not allowed to work. "Although many would like to work and many are also proficient in the local language, they aren't allowed to. Such is the paradox," he concludes.

For years, the European Union has launched a variety of projects in an attempt to end discrimination against different ethnic groups. In 2005, 12 EU states signed the ‘Decade of Roma Inclusion’ programme, backed by the EU and the World Bank. Germany wasn't a member. Within the framework of the Decade of Roma Inclusion programme, the 'Roma Education Fund' was established; a fund which offers educational opportunities to Roma people living in member states.

In spite of this, the EU's capacity to protect ethnic minorities has its limitations. Some question the usefulness of the Roma integration strategies. Some parts of Duisburg, Mannheim, Gelsenkirchen, Dortmund or Berlin, which have a comparatively higher proportion of Romani people, indicate that the integration strategies to date have been unsuccessful.

"We want the same rights as Jews who come to Germany," the voice on the speakers shouts. According to the State Ministry for Migration and Refugees, Jews are the exception when it comes to immigration; they can enjoy freedom of movement as long as they are nationals of the former Soviet Union and have a sound knowledge of the German language.

Roma are Europeans - I don't understand why they have to leave

At the Neukoelln protest, there are many people who aren't Romani. Amongst others, there is a Brasilian tourist who is there because she considers political engagement to be very important. "The Romani are also Europeans, I don't understand why they have to leave."

From a purely legal standpoint, the Roma aren't being forced to leave because of their heritage. They have always been discriminated against in Germany. To accuse the enitre community of playing the victim would be short-sighted. There are German Roma living in Germany, just as there are perfectly integrated Romani immigrants living in the country, and there are also those who don't want to integrate or are unable to do so. As a young woman behind me on the train so perfectly put it: the prevailing prejudes are "purely racist," because ultimately, in every group of people there are the bad and the good.