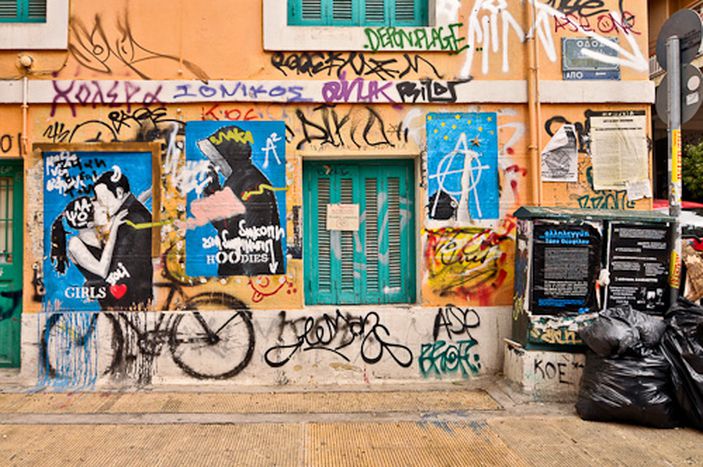 We've heard it all before: Greece is playing the lead role in the tragicomedy that Europe has been performing for nearly five years. The beleagured country is shamelessly playing its last trump card: tourism. Guided tours of the capital are offered, centring on 'riot tourism'; far from the Acropolis and right up close to the graffiti

'Okay, this one, it’s not bad! I’m going to put it up on facebook!' exclaims a young English student after several unfruitful attempts at taking a photo of herself and her friend in front of the Acropolis. Jen and Alice are taking a break from their studies to come and spend a few days in Greece. It’s early April and it’s still cold in the rest of Europe, so Athens seemed like the most logical destination to the girls. 'Our parents were a little worried about us going to Athens alone, but we promised them that we wouldn’t go out at night and that we’d be careful. They even gave us a bit more money so we could find a good hotel in a safe part of the city,' says Alice.

Austerity, violent social movements, strikes which paralyse public transport, insecurity, illegal immigrants wandering the streets, metal shutters of closed shops, neonazis who beat up anyone who doesn’t look like the average Greek… In the media, Athens has become a byword for a city ravaged by crises. It’s this image that’s been driving the tourists away - but not all of them.

One sunny day over an iced coffee, Kostas Kallergis, a journalist at The Crisis Republic, tells me a strange story. Athenians have seen the classic tourist, who was used to following the tour guide’s colourful umbrella, transform overnight into a new kind of visitor. Greek tourism has transformed: a kind of safari for American anarchists seeking inspiration in the Greek anti-establishment movement; an adventure for European journalists and students lacking drama in their lives; and an opportunity for those who have no ideals in particular to take part in riots. 'During confrontations with the police I saw ten or so teenagers from other European cities who had come to Athens for a short break. Instead of going to Rome to throw a coin into the trevi fountain, they chose to come and throw a stone at a Greek policeman.'

This is no joke. Some international travel agencies are even offering 'riot tourism' trips to Greece to their customers. Imagine the slogans: 'Fed up of cushy holidays? Come and see a European country in crisis, devastated by misery, unemployment and poverty! On your left is Syntagma Square, birthplace of riots, and on your right we have the barricaded Ermou Street. Check out the internet for some excellent advice on how to be a 'riot tourist'.'

Don’t even try to mention this new type of tourist to Dimitra Papadopoulou, an impassioned guide with a PhD in communication from Paris XII University, who has invited me on a tour of the Acropolis with a small group of tourists from all over the world. 'Greece has problems, we can’t deny the facts,' she says scathingly. 'But the crisis isn’t some kind of show. Crisis-themed tours will only create a bad image of this country.' A negative image means fewer tourists, and fewer tourists mean fewer jobs.

Dimitris*, a man in his thirties, is part of a movement called the omikron project. Its members say they are simply ordinary young people who have had enough of the exaggerated and inaccurate portrayal of their country. From his seat in a stylish Athens bar, Dimitris explains: 'We can’t do much about the economy or unemployment, but we can’t just stand by and do nothing. Our country is already suffering from the horrors of austerity. The image spread by the media is only going to make things worse, mainly by threatening the tourism sector.' It’s because of this that the people involved in the omikron project have embarked on a veritable crusade against stereotypes. Well, a quiet crusade. For now, they stick to spreading the word on social networks, printing posters with distracting photos and drawing cartoons where the main character, Alex, embodies the host of clichés that the rest of the world associates with the Greeks.

One group of young, presently unemployed Greek architecture and design graduates came up with an innovative idea. To top up their income, the group are riding the wave of alternative tourism. Inspired by similar tour operators that already exist in other European cities, especially Berlin, they have set up the alternative tour of Athens. 'Athens has become a sort of transit area for the islands, and tourists only visit the Acropolis,' says my guide of the day, Maria Peteinaki. 'We came up with the idea of offering them something different. We wanted to show the hidden face of our capital, by setting up a business that would at the same time create jobs.'  tells me. Maria, who is in her thirties, has her own architectural firm but recently business has been slow. 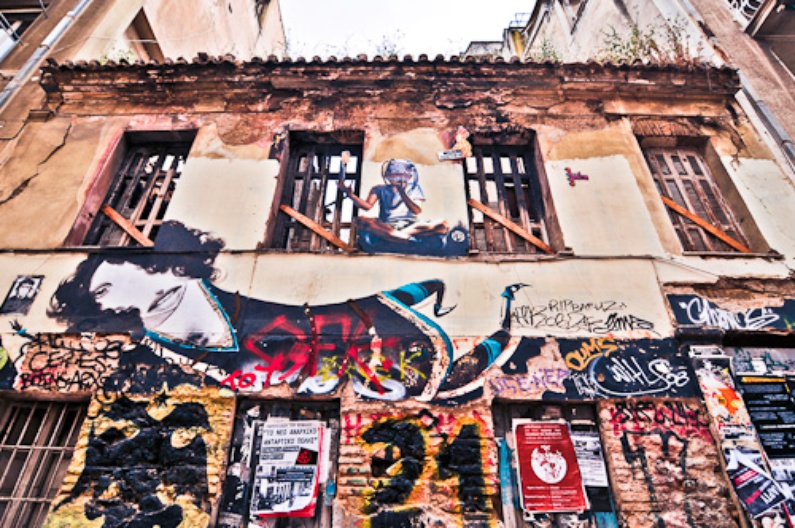 On the agenda today is a private walking tour of the allegedly anarchist district, Exarchia, where legend has it that once even the police did not dare to venture. It is a sort of mash-up of architecture, street art, history of social movements, visits to self-managed parks and squats - the refuges of migrants. Today, it’s a perfectly peaceful area of town, with the odd burnt-out house and building facade completely covered in graffiti. On one of these walls, a commemorative plaque recalls the killing of a 15-year-old by police in 2008, which sparked the riots. 'I imagine this graffiti makes the place feel somewhat insecure,' I speculate. Yet Maria corrects me – 'This isn’t graffiti, it is art.'

This is the first in a series of special monthly city editions on ‘EUtopia on the ground’; watch this space for upcoming reports ‘dreaming of a better Europe’ from Warsaw, Naples, Dublin, Zagreb and Helsinki. This project is funded with support from the European commission via the French ministry of foreign affairs, the Hippocrène foundation and the Charles Léopold Mayer foundation for the progress of humankind

*Name has been changed