Populists in Germany: You shall not pass!

On the 24th of September, Germans will choose their destiny by electing their next parliament. While the country has hindered the rise of the extreme right, Alternative Für Deutschland is still predicted to have about 10% of votes. But a group of motivated and imaginative young people have decided to make populism nothing more than a bad memory in their country.

What do you reply to a racist remark or an opinion you don’t like? How do you keep calm and keep an open dialogue while avoiding confrontation? On their website, Kleiner Fünf gives advice to people wanting to know how to prevent simplistic and sometimes hate-filled discourses from spreading without being opposed. One of the best pieces of advice is to deliver constructive counter-arguments against your opponent. And to do this, you better be well-informed. Through information files and witty videos, the collective is doing their best to put out some explanations on the intentions of populist and far-right parties which are proliferating in Germany.

Who does Kleiner Fünf have in its sights? One party in particular is raising concerns: Alternative für Deutschland (AfD). Created in 2013, the party has seen rapid growth and is now predicted to take between 9% and 11% of the votes in the polls for the next legislative elections on the 24th of September. Under the German electoral system, a party receiving over 5% of votes can enter the Bundestag (the parliament) and appoint deputees. The aim of Kleiner Fünf (which means “less than five”) is to do whatever it takes to ensure that AfD don’t reach this significant threshold.

Created in May 2016, the collective consists of about 100 people spread all across Germany. A lot of its campaigning is online but also on the ground. “What we do is motivate people to act. We are motivators,” explains Paulina Fröhlich, the organisation’s spokeswoman. “We don’t represent any party or political position. We just don’t want a xenophobic party to be able to enter parliament, and for it to not only gain institutional influence and media exposure, but to also receive public money. Money it would invest in reproducing its ideas for future generations.”

Once a week Paulina and her friends meet in the Wedding area of Berlin for a poster-pasting mission. The mission looks like a militant action, but Kleiner Fünf’s posters don’t necessarily have anything to do with traditional political propaganda. They feature animals: an eagle, an elephant, a dove. And most of all they look like 'missing' posters: “Where is Horst? Where is Frieda?" The collective tries to be innovative in its methods of engaging in political dialogue. They continuously mix the real and the digital world. So, if a passer-by takes the little detachable tab from the 'missing' poster, they will find out from the web address written on it where (and who) Frieda is, or Carlo or Timon. Each animal mascot represents one of the big ideas which could be threatened by the rise of right-wing populism: Europe, social security, diversity, federalism or even history. 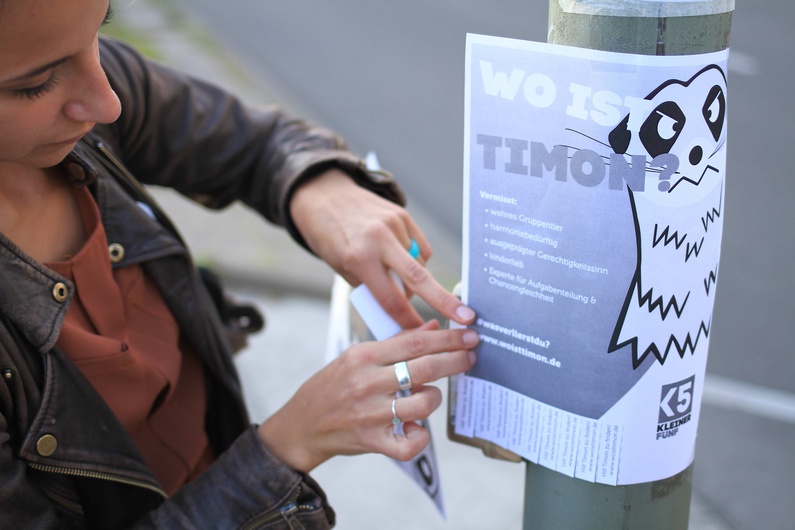 The full plan of action imagined by the collective takes a somewhat idiosyncratic approach. Another project involves giving out small 'engagement rings' to encourage abstainers to vote. How? The “motivators” try to convince someone they know to 'get engaged' to go with them to the polling station, just like you’d get engaged to be married. They pop the question: “Would you vote with me?” in the traditional way by getting down on one knee. When they agree to go with their proposer, the lucky 'fiancé' will count as one more vote in the polls but more importantly: a vote that won’t be for AfD. A party's success is calculated by the total percentage of votes cast, so every abstaining voter affects the final swing of results.

Every week, the collective emails a 'call to action'. Each person should try to commit five minutes of their time. For a generation that apparently spends more time liking things on Facebook than being active in a party or political movement, it’s not easy to battle 'slacktivism'. So Kleiner Fünf proposes really easy things to do, as well as little 'activism kits'. Their ideas include calls to organise a pub quiz (obviously with political content which will stimulate debate amongst participants), poster sticking, photo competitions, but also give out addresses of organisations for those who want to take it further than the immediate electoral campaign. “We don’t want to do everything single-handedly. We’re just a launch platform,” Paulina adds: “Everyone needs to get involved in the work!” She says that she’s learned a lot since she started to work with the Kleiner Fünf team. “In fact, everything depends on the way you approach someone. If I meet someone who doesn’t seem to have a political opinion, and I try to impose my knowledge and my own views [onto them], that person is going to back off from [the idea], and feel intimidated.”

In the streets of Wedding, Paulina and her friends are able to approach passers-by with a good sense of humour with the help of their engagement rings. This action also leads to some interesting situations. A woman says she doesn’t even know where or how to vote, so the team tries to advise her on which procedures to follow. A man declares that he won’t be voting, so Paulina tries some debating techniques to try to understand his position. She explains later: “Most importantly I tried to listen to him, and to get him to speak.  I didn’t tell him what to do. It turns out he is severely disillusioned when it comes to politics and doesn’t believe in any of the parties.” When he leaves, she says with a smile: “At any rate I hope we’ve shown you that there are still some young people like us who do still have faith in the political process!” 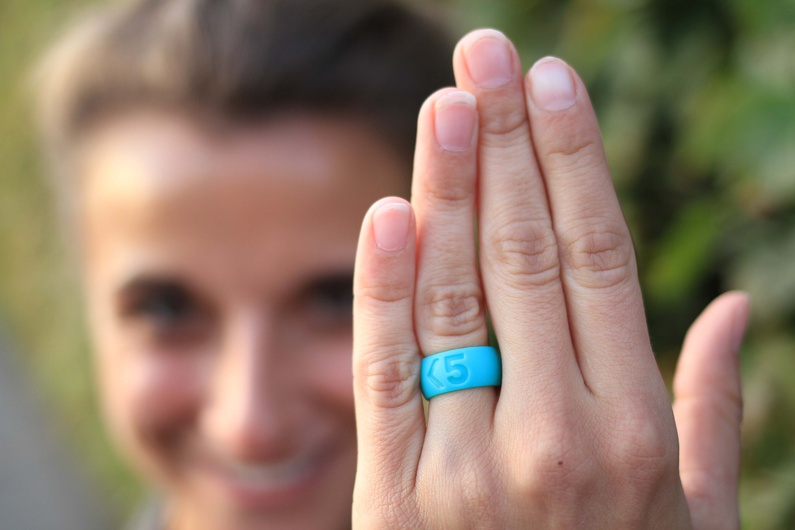 The 26-year-old explains that it’s more efficient to focus their efforts on young people: “The new generation is not into protest voting. They haven’t been disappointed by their previous votes. But they are also more likely to abstain.” The small group of poster-pasters are between 23 and 27 years old. They all heard about Kleiner Fünf through word of mouth. It’s Raphael’s first event. He’s interested to see an easy way of taking political action. Marie and Lore have already responded to other 'challenges' set by the 'motivators'. “I’ve also written some articles for their blog and handed out information to people I know,” Marie says. For these idealists, the best way to instigate change is to start by convincing your own circle of friends. Take advantage of a family meal to argue against the AfD. Have a discussion with a neighbour or flatmate about the factual basis of an argument, and how to verify statistics. Convince your little brother to go and vote.

Normally, parties seek to achieve the maximum votes. Kleiner Fünf is seeking the opposite – to achieve the minimum. And each vote against the populist trend will be a small victory for them.

This article was written with the support of the Franco-German Youth Office (OFAJ).