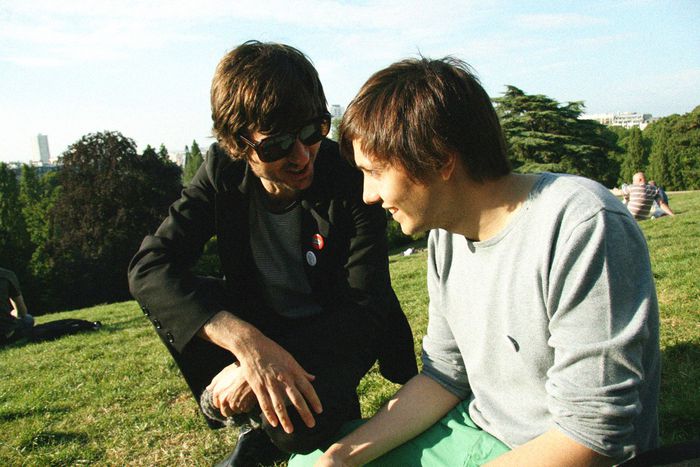 Parisian 'eco-geeks': the youngest players in the French presidential elections

‘Paris is modern and forward-looking – which is why the green voters are important,’ says Joly, who will be representing the party ‘Europe Ecologie-Les Verts’ in the upcoming French presidential elections. Joly’s race for the candidature this spring was monopolised by a handful of eco-geeks, who grasped before anyone else that the internet could be the key to the election campaign.

Reportage from the campaign

You would be teasing a young member of the Italian partito democratico if you were to ask him how old Eva Joly’s website programmer is. ‘19!’ is the answer.  Elliot Lepers, wearing green trouser 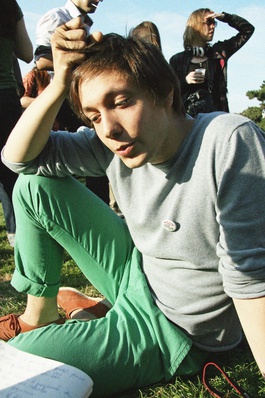 s and a broad grin, is enjoying the sunshine in the Buttes-Chaumont park in the north-east of Paris, where he has organised a picnic in honour of the Frenchgreen candidate Eva Joly. Happy families and dozens of students have come along. The latter have enrolled as members of a political party for the first time.  says Elliot. ‘After two months of as an active member of the party I’m now a representative secretary in the 13th arrondissement(of the twenty districts of Paris - ed). As well as that I worked on the website for the regional elections. Now I’m working on Eva’s website.’ False modesty would be out of place here, because eco-geeks like Elliot have completely shaken up the French greens; around 300 young people have helped out as volunteers on the technical side of things. They know the ropes when it comes to graphic design and have made programming into an art. During the pre-election campaign they were even paid. ‘We’re a small party – in 2007 we didn’t pass the five percent hurdle. We try to manage with just a few resources.’

Eva Joly watches Elliot – not without pride – and finally thanks the ‘eco-geeks who made really great films based on the very normal heroes from my books.’ These are her resources in the fight for votes against Nicolas Hulot, a former television presenter of the programme Ushuaia (on channel TF1), founder of the eponymously-named trust and initiator of the so called ‘pacte ecologique’ or ecological pact, which was signed by the 2007 presidential candidates – current president Nicolas Sarkozy included. Hulot has to convince the activists ‘one by one’ because, as he explains, ‘not everyone understands my background, but 90% of people change their minds after listening to me.’ 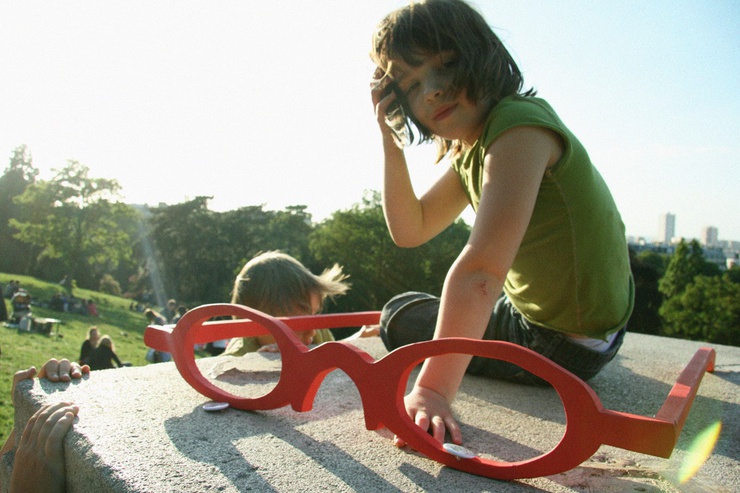 Going green: ‘A necessity, not a fashion’

In total around one thousand new party members have joined in this struggle for the first round of elections in autumn 2011. More often than not these are young people who ‘are able get involved in politics for the first time in an open, social and less strict party,’ explains Tamara, a 30 year-old researcher. She hasn’t yet missed any of the primary election meetings. ‘It’s fascinating to be part of a new creation, to see how it takes shape slowly but surely. I’ve even met former Gaullists in various meetings, who were disappointed by the centre-right and are convinced that an ecological approach is right.’ 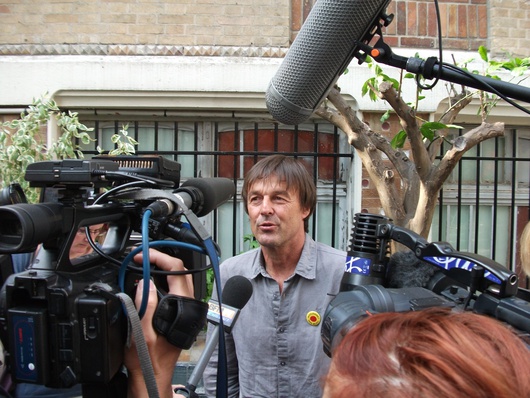 minister president. The French greens have always had their high and lows. ‘They did really well in 1989 and 1992, even overtaking the (right populist) front national ,’ remembers sociologist Erwan Lecoeur, author of the book Ecologists in politics (Des ecologists en politique). ‘The green voters in Paris aren’t bourgeois. These are bohemians who live in the north east regions of the capital, who have studied and who earn an above-average wage.’ This might have been true in the past, but things are changing. ‘Since 2009, the moment when Europe Ecologie-Les Verts, came forward with a believable team (comprised of Eva Joly, Daniel Cohn-Bendit and Jose Bove), they have also attracted people who traditionally voted for the left, as well as people who often abstain from voting and the unemployed.’

The first general assembly on the theme of atomic energy took place in May at the Bellevilloise, a chic club in the 20th Parisian arrondissement: the ideal showcase for the candidates to face the hard core of the French greens. ‘One of the old-timers here is Guy Philippon, an 84 year-old activist currently arranging the ‘diner biologique’ (organic dinner) for Eva Joly,’ explains Patrick Farbiaz, secretary of the 20th arrondissement, after a biting comment about the not-so-green shampoo advert of Nicolas Hulot’s Ushuaia brand. ‘The greens bring in thirty percent of the votes here and we have about two hundred members. Traditionally they come from the petty bourgeoisie.’ Why have the greens achieved so much success in Paris? ‘It’s quite simple. Nobody opposes environmental themes, as not many people have cars here. Sometimes it’s even difficult to find a petrol station. There aren’t enough green spaces in Paris, and so town gardens, organic protection and community supported agriculture (in French: AMAPs - ed) are supported. These things aren’t just a fashion, they’re a necessity.’

The pre-elections were set to be controversial. ‘Dany le rouge’ (Daniel Cohn-Bendit) didn’t take part in this year’s party congress at the beginning of June. The politician is against the greens taking part in the 2012 presidential elections. ‘The greens don’t understand that it’s worth just avoiding certain elections,’ says Erwan Lecoeur. He claims that everyone will vote for PS (socialists) and UMK (conservatives) in the preliminary round anyway to block the way to the questionable Marine Le Pen(the daughter of Front National founder Jean-Marie Le Pen, who made it into the final round against Chirac in 2002 – ed). The greens also risk not getting the costs they invest in the campaign back. Only the parties who pass the five percent hurdle have their investments reimbursed by the state. 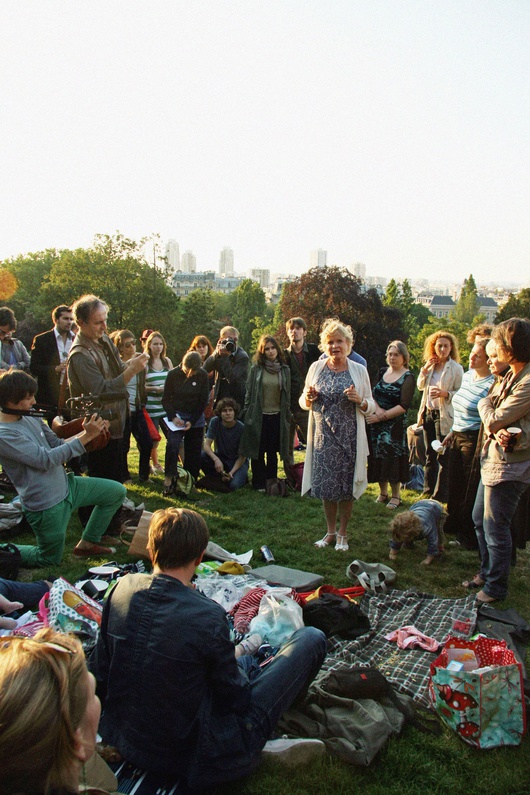 On top of that the greens risked an internal division because of the two main candidates. This is despite the talents of the young party secretary Cecile Duflot, who in her role as unbiased arbiter to has tried to keep everyone on course. The former anti-corruption judge Eva Joly embodies respectability and managed to steer the political debate onto social themes, winning her the support of long-time activists. Once he was in the arena however, Nicolas Hulot was able to win over a lot of French people who had followed his career as a television presenter for twenty years but who had never voted green before. ‘I believe that Hulot’s becoming green was sincere and not just a career move,’ explains Adrien Saumier, a 28 year old eco-geek who had shunned the picnic in favour of a video chat with his candidate. ‘I never watched his programme but I think his popularity could do the party good. We might even be able to attract some voters from the centre with him and so achieve six percent of the vote without a problem in 2012.’

The candidature of Joly will one way or another represent the start of the development of a political group who are not ashamed to define themselves as ‘exclusively ecological’. They refuse to slot into the centre left or centre right and instead insist that their success rests entirely on the election results of a generation born in the eighties. ‘The climate conference in Rio de Janeiro (1992) took place when we were growing up,’ explains Adrien, ‘and we were the first to understand that the internet would stand in the centre of politics in the coming years.’ Elliot agrees: ‘Interest in the internet and in the environment go together.’ Tamara adds that ‘while the centre right has reinvented itself over the last twenty years, the greens are the only ones offering new approaches.’ It seems then that in Paris ‘green’ isn’t a thing of the petty bourgeoisie anymore...

This article is part of cafebabel.com’s 2010-2011 feature focus on Green Europe; read the full set of city special editions.