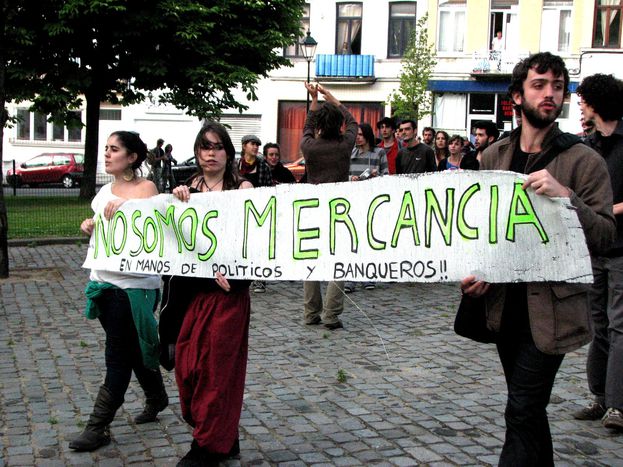 The capital of Europe is moving to the rhythm and vibe of the #spanishrevolution; young students from Spain living in Germany, Portugal and Greece amongst others started organising people’s assemblies not far from their embassies on 15 May, and it's still ongoing. Perspectives

There are tents, an outdoor kitchen, old sofas and banners hung up on trees demanding Real democracy NOW. There is and an invitation in four different languages for people to take to the streets. Since 27 May, in an echo of the Spanish youth who are protesting all over Europe after their local elections, the 'indignant ones' (aka Malcontents) of Brussels have set up a peaceful camp in Place de Moscou, which is located in the popular area of Saint-Gilles. Somewhere in the region of 350 to 400 people were present at a public gathering in order to 'leave behind a purely Spanish symbolism and reach out to other citizens.'

‘The situation in Belgium is less stable than we think’ 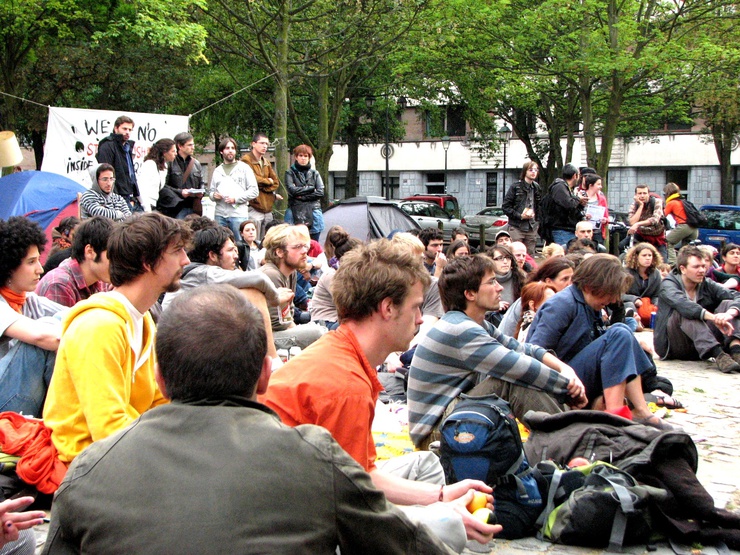 'From the start our aim was to show our solidarity with the organised passive resistance going on at the moment in Madrid, Barcelona and Valencia,' say Salva and Julian, who started the movement. 'We quickly understood that we can’t solely focus on what’s happening in our country. There were 700 of us during the first assembly on 20 May. There were fellow Spaniards as well as other nationalities such as Belgians, Portuguese and Italians. We discovered that the situation in Belgium is less stable than we thought at first; there are similar problems in terms of employment, unemployment and instability. Also, there are a lot of immigrants here; we’re in the centre of Europe with all the institutions that have an influence on the lives of 500 million people. It was important to expand and open up the debate to other people.' A look at the computer graphics on the RFI (radio France international) website regarding EU public debts and deficits show that Belgium’s debt surpasses those of Portugal and Spain.

A movement between ideals and pragmatism

The gamble seemed to have paid off on 28 May; close to 400 people came to lend a hand at 7pm at the camp in Place de Moscou. Men and women, young and old and from different countries came and took it in turns to voice their concerns over the course of a few minutes. This was done by means of a makeshift soapbox – a small table salvaged from the street – and a megaphone. Some of the orators were a little intimidated at times, and some condemned capitalism and its effects on poverty as well as social inequalities. There were applauded and people commented on their words too. Other times they reflected on political movements, aims and the ‘indignant ones’ themselves. At times the questions are more matter-of-fact. 'How are we going to organise the rest of the camp? Taking out the rubbish? The toilets? We also need to talk more with the neighbours in Place de Moscou who don’t understand what we’re doing here,' said one young lady. 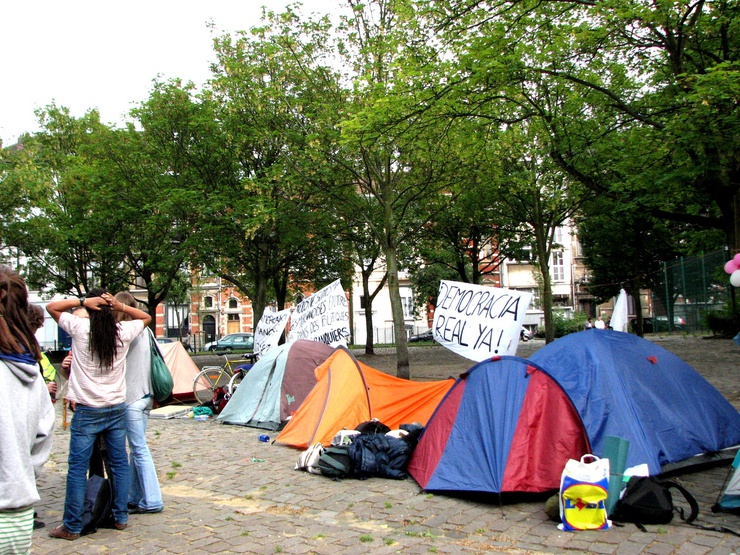 The speeches afterwards also reveal that the majority of citizens who are on the side of the young Spaniards are often already locked in various battles of their own: the right to housing, anti-poverty, so-called detention centres (centres fermés) in Belgium and the privatisation of public services. There are also young, extreme-left party members, such as Aurélie who is in the Belgian workers’ party (Parti des Travailleurs Belges, PTB), and headed back to Madrid to meet up and spend a few days with fellow ‘Malcontents’ from Puerta Del Sol. Both the strengths and weaknesses of a party in its infancy are to be found there, in the diverse motivations and opinions that constitute this diverse assembly. The questions merge and the ideas click into place: is the name of the game just the camp or it is necessary to go even further? It is really necessary to remove all traces of party political systems and the traditional left-right divide? The debate goes ahead full steam but sometimes goes slightly off track when people sit on the fence or have a laugh.

'Discussion between citizens in public places is the true spirit of democracy,' chime in Salva and Julian. 'We re-establish the original principles of a forum, the agora, as invented by the Greeks. In practical terms, we’re experimenting with an ability that we haven’t lost.' Another 'Malcontent' summarises the situation with finesse: 'The movement is a complex system, like a living organism in the process of growing.' 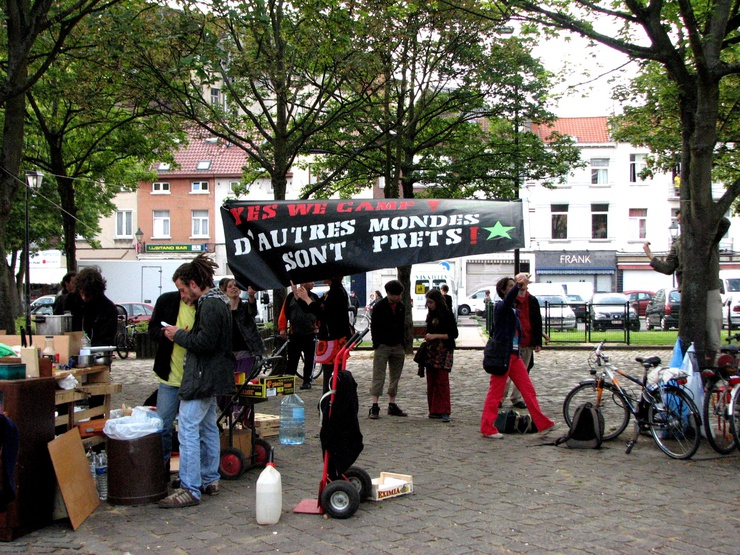 Little by little a structure seems to be emerging; the group is splitting up into different committees and each is charged with coming back to the assembly with solid suggestions. Some of them focus on communications, others on issues and the rest with logistical problems. The fourth committee is charged with liaising with those movements already in place in Belgium – Liège notably – and in other countries. There is already talk of drawing up a manifestom following the example of one created by the residents of Plaza Puerte del Sol in Madrid.