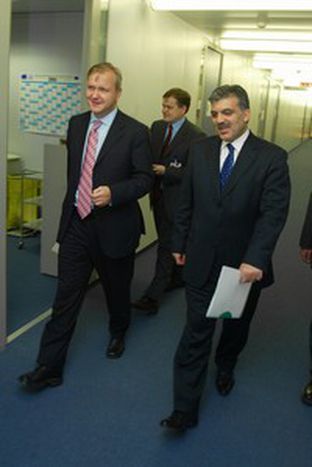 As the election battle in Germany heats up, Turkey is shivering: If Angela Merkel becomes chancellor, a ‘privileged partnership’ - as opposed to full EU membership – would be on the cards. Could this be the end of Turkey’s European dream?

“Unheard of discrimination” and “absolutely outrageous”. That’s how Hakki Keskin, a Hamburg-based professor of politics and chairman of the Turkish Community in Germany, describes the concept of a ‘privileged partnership’ between the EU and Turkey. He speaks for the majority of the 2.3 million Turks living in Germany.

Angela Merkel, the conservative Christian Democratic Union (CDU) candidate, has given little thought to the approximately 600,000 German Turks who, unlike the non-naturalised ‘guest workers’ and their families, have the right to vote on September 18. What is sure is that immigrants are mainly on the side of the Social Democrat Party (SPD) and that there is much to be gained by playing on the Turkish fears of conservative voters. But what is all is this fuss about the concept of a ‘privileged partnership’? The CDU wishes to extend the customs union with Turkey into a wide-ranging zone of free trade, drive forward the project of a Euro-Mediterranean zone of free trade and bring Turkey into the Common Foreign and Security Policy as well as the European Security and Defence Policy. In this way, the CDU plans to connect Turkey to the EU, but without ‘stretching’ the community through full membership.

With France and Austria against Turkey?

Following initial scepticism, the ‘privileged partnership’ is now being met with positive responses. Nicolas Sarkozy, France’s interior minister with presidential ambitions, has spoken out against Turkey joining the EU, while Austria’s chancellor Schuessel supports opting for a ‘partnership’ as a possible result of accession negotiations. At the end of August, Angela Merkel approached conservative European government leaders and asked them to debate the idea of a privileged partnership during accession talks. In Germany, the CDU and its sister party the CSU plan to gain votes by playing on Germans’ fears of Turks. According to a survey by newspaper Die Welt, 60% of Germans are against Turkey joining the EU. Roland Koch, Prime Minister of the German state of Hessen, has consistently called on the leaders of the CDU/CSU to ‘sex up’ the election battle by using topics such as Turkey’s accession.

Fear of the unknown

Fear – that is the main reason for rejection of Turkey’s membership of the EU. Fear of a country which would have the second-largest population in the EU and fear of Turkey’s strong influence in the European Parliament and the Council of Ministers as a result; fear of the unknown; fear that the unreformed EU institutions will not be sufficiently prepared; fear of the reaction of the people of the current EU member states. And, last but not least, fear of Islam.

Rapprochement between the EU and Turkey has been going on for more than 40 years now. It is important that this be seen as a complicated process of stabilisation. A ‘privileged partnership’ would be a compromise between a complete break and full EU membership, which would place too many demands on the EU. This, argue the conservatives in Germany, is the long-term, more workable option. “The privileged partnership could be quickly put into place. This would be more useful to Turkey than the illusion of full membership, which is rejected by many”, says Eberhard Sinner, CSU politician and Bavarian Minister for Europe.

Turkey, however, sees it differently. Ali Babacan, Turkish negotiator in the EU accession negotiations, continues to reject firmly anything other than full membership. Foreign minister Abdullah Gul also describes the CDU/CSU’s concept as “illegitimate and immoral”. As for EU enlargement commissioner Olli Rehn, he believes that the concept is simply incomprehensible. “I have yet to hear a convincing answer as to whatever [the privileged partnership] might mean.” Angela Merkel will perhaps give him an answer after 18 September, as October 3 - the German national holiday and the official start of Turkey’s accession negotiations - is fast approaching.