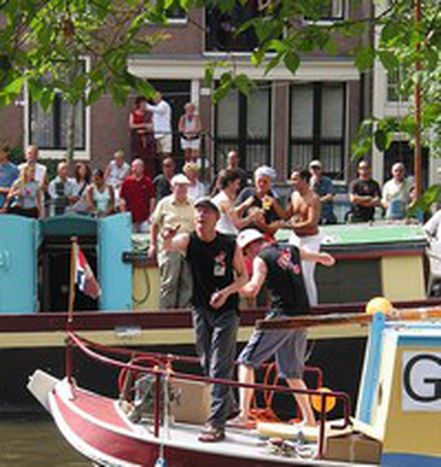 Not man and wife: partnerships in the Czech Republic

Despite the hostility of some parts of society, homosexuals in the Czech Republic have reason to be cheerful

Prague, March 14, 2006. “Family begins with a man and a woman”, a group of demonstrators is shouting on one of Prague’s busiest streets, Na Píkopech – the trench. A small group of citizens have brought along their wives and children to voice their anger about the contested bill on registered partnership that the Czech Parliament is scheduled to vote on in its decisive session the following day. Will the members of parliament outvote the conservative President’s veto? On March 14, not only homosexuals were occupied with the issue.

All of a sudden, two young men block the demonstrators’ path. Lukáš and Jakub start kissing before an enraged crowd and trigger an avalanche of disgust and abuse. Where does this hate of homosexuals come from? “I think it’s about overcoming stereotypes that are deeply rooted in society,” says Slavomír Goga, spokesperson for the “Gay and Lesbian League”. “In the 19 century, it was unimaginable that women would one day enjoy the right to vote. And then look at the situation today!” There is no doubt that prejudice exists in society. Even in liberal Europe, the idea that marriage between a man and a woman ought to be considered the norm has deep roots. Laws on registered partnerships were therefore accompanied by heated debates in every country where they have been introduced.

The bill on registered partnerships had to be initiated several times in the Czech Parliament. As early as 1995, the first attempt at giving same sex couples equal legal status was carried to its grave by the government. Nothing much happened in the years to come. The bill remained a highly politicized issue, both the Christian democratic KDU-SL, and the liberal-conservative ODS remained hostile to the bill, as did the Christian Democrats.

And since the KDU-SL, which is the traditional tipping-point party of Czech politics, was involved in coalition governments until 2002, the law on registered partnerships was continuously swept under the rug. It wasn’t until March 15 this year that the bill was finally passed. Despite President Václav Klaus’ veto, the bill was passed by Parliament, albeit by a considerably small margin: 101 of 200 MP’s voted in favor.

Alongside Slovenia, the Czech Republic can today take pride in having the most progressive legislation among the ten new EU members, according to the Czech Republic’s “Gay Initiative” . Persons of the same sex can now live together, include their partner in their will, in short: live as registered partners.

A family consists of a man and a woman!

Most of the Czech Republic’s citizens agree with this liberalisation. In October, 62% said they concurred with the bill. This probably has to do with the fact that a poll conducted by the STEM institute indicates that 59% consider themselves atheists. Nevertheless, the Catholic Church vehemently opposes the bill. A press release by the Czech Bishops’ Conference reads: “There is not a single reason for the recognition of special rights for groups on the basis of their sexual relations. Family and life form a unit that society has to protect. Public authority must not institutionalize a form of cohabitation not intended to lead to the birth and upbringing of children in such a way that makes it seem to have the status of marriage and family.”

For the church, homosexual partnerships represent a dangerous precedent. But the creeping decay of traditional models of cohabitation is also a strong argument for non-believers. The demonstrators in the trench did not follow any call to action on the part of the Czech Bishops’ Conference. They are ordinary citizens afraid of something they don’t know. To them, a child growing up in a homosexual environment is a gruesome idea that has now come a lot closer to home due to the bill on registered partnerships.

Slavomír Goga cannot but shrug his shoulders: “What is a family today? A hundred years ago, it was a father, a mother and a bunch of children. Today, we also call a single mother with one child a family.” That’s why he looks into the future with optimism: “Concepts evolve. It is only a matter of time until people recognise our right to live together.”