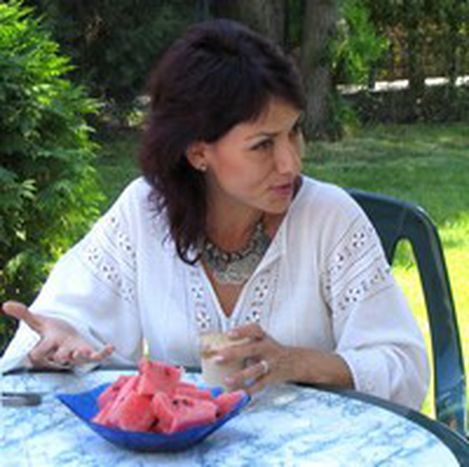 With her programme Telescope, the Bulgarian TV journalist Nikolina Dimitrova is building a strong bridge to Europe and the rest of the world.

The small villa on the coast of the Black Sea, in which Nikolina Dimitrova is waiting for me, is situated over a picturesque little bay, not far from the tourist destination of Albena. We are sitting in the orchard in front of the quaint holiday home, our gaze wandering between the vineyards and the green-blue sea. The air smells of seaweed, mussels and the hot rocks around us. Nikolina Dimitrova is graceful, with a complexion almost like porcelain. She is mixing her yoghurt with wild strawberries, which her neighbour brought her early that morning. She speaks with a warm, quiet voice; enthusiastic but not overpowering. The former newsreader of Bulgarian television’s Channel Two has, for the past five years, been the producer of one of the country’s most successful programmes, Dalekogled (Telescope).

Looking through the telescope

The TV star interviews foreigners - workers, students, civil servants, diplomats, Arabians, Americans, Africans, but most of all Europeans - who have come to Bulgaria since 1989 and who have stayed, producing fifty-minute long monologues which tell jovial or insightful stories. Hundreds have sat in the famous red chair, the hallmark of the programme, and have shared (in endearing, often broken, Bulgarian) their impressions of the country and its people. “We Bulgarians have, for 45 years, been forced into blinkers and have not really gathered much knowledge about the world around us. Our need to place a telescope to our eye and look at the world, to find out what the others think and how they perceive us, is all the greater as a result”.

For many of the show’s guests, Bulgaria was an unknown entity before they decided to settle in the Balkan state. Germans, for example, often tell of how they used to confuse Bulgaria with Romania! Lots tell of their sheer astonishment at the warmth of the country’s people; at the high level of education of their friends and colleagues; at the ease with which their compatriots deal with their difficult day-to-day life; and at the happy and lavish celebrations which take place despite widespread poverty.

“Bulgarians are nosey, open and inventive – that is what I hear the most often” says Nikolina. She remembers a tale someone from Sweden told her: Travelling along a road dotted with potholes in an old banger, the belt suddenly ripped and the car would not budge an inch. The Bulgarian driver asked his wife to take off her tights, whereupon he used them as a spare part so that the journey could continue.

Many of the by now 700 guests from foreign countries have also told of how the disorder, dirt, thefts and absolute disregard for environmental protection gets to them. They criticise, but do so in such a caring, factual and down-to-earth way that, after the show has aired, many Bulgarians call the production company and thank everyone for the constructive, well-meant suggestions.

Mrs. Dimitrova makes coffee for us. She answers the personal questions that I ask quite briefly, almost curtly. She was born in the small Bulgarian town of Dobritch and she went to the foreign languages high-school, an elite school in those days. Having graduated with outstanding honours, she passed the difficult entrance exams to St. Kliment Ochridski, the Bulgarian university steeped in tradition. Having graduated, she worked in television and in PR, and at the moment she has two jobs; just like many other Bulgarians who have to fight every month to survive.

“The most valuable thing I have done in my life is to have had my little son, Ivan” says Nikolina, with understatement untypical of a Bulgarian. “It is damned hard to juggle work and motherhood. When he was born I had to take him everywhere with me and interrupt the interviews when he needed changing and feeding.”

One eighth of the Bulgarian population moved abroad when the Iron Curtain fell – a shocking number when one considers that it was young and educated people in particular who left. The land was being bled dry. But Nikolina points out that increasing numbers of Bulgarians are now returning home and it is this tendency which helped inspire her to change the concept of her show in early 2005. The airtime now belongs to the home-comers. Often she introduces people who have studied in Europe or have set up a company there and have now returned so as to pass on their experiences and knowledge. “They bring the European rhythm home; they cross-pollinate the Bulgarian temperament with Western working practices and structures”. She is convinced that the home-comers are the multipliers of the European idea, they will give Bulgaria a European dimension.

Nikolina Dimitrova plans a documentary film in the near future in which Europeans who have lived in Bulgaria for a long time introduce the small Balkan state to people back home in their own countries. A delicate woman is taking on the formidable task of building a bridge between her home country and Europe.