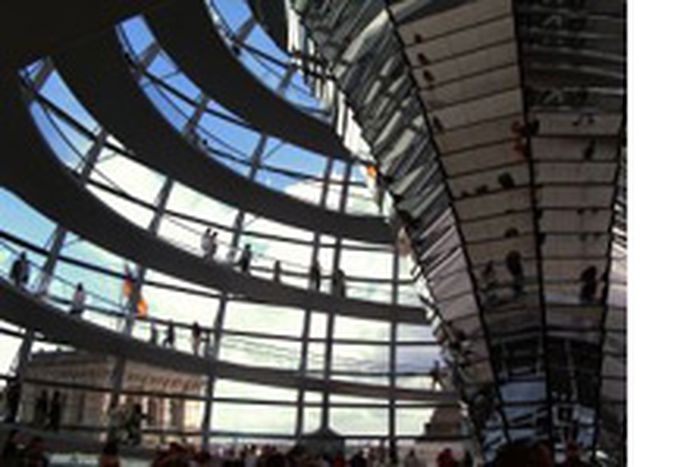 Living in the shadow of the past

Between new-found nationalism and rediscovered confidence, are the Germans beginning to see themselves in a different light, without having fully dealt with their past?

Can the Germans rise from the shadow of the Third Reich? This is a question that comes to mind when reflecting on public debate in Germany in recent years.

Since the end of World War II, German self-perception has been characterised by the country’s experience with Nazism and its ongoing conflict with this. The claims– and contradictions– of the critical and often agonizing self-reflection belong to the national identity.

The coming into power of the Red-Green coalition government in 1998 brought a change: for the generation of Gerhard Schröder and Joschka Fischer the key political event was no longer 1933, but 1968. The collapse of the wall marked the end of a divided Germany and the Cold War, both of which had been direct consequences of the Second World War. The government’s move from Bonn to Berlin marked the founding of the new Berlin Republic. According to 'Der Spiegel' author Reinhard Mohr, who takes a look back at the past in 'Das Deutschlandgefühl' (2005, 'The feeling about Germany'), this republic was to be “sovereign, without being too forward-looking, yet without stealing from the past.”

In reality, the Red-Green coalition did inject a new style into politics in the years that followed. Due to German military participation in the war in Kosovo and the open refusal of the Iraq war, several basic ideas of German foreign politics were abandoned to reveal a new self-confidence. It did not break with the past however, as the then foreign minister, Fischer, justified the intervention in Kosovo with the order “Never again Auschwitz!” The history of relations with neighbours also remains to be dealt with, especially with Poland and the Czech Republic.

Etienne Francois, historian at the Technical University of Berlin, prefers not to refer to it as new German nationalism. For several years, he has been researching German self-perception and puts the new self-confidence down to the increasing detachment from Nazism. Only a few eyewitnesses still survive, François says, and today’s 20-year-olds who have grown up with German responsibility and guilt no longer identify with the Nazi period. They view their own history with detachment, something that would have been impossible for their parents to do.

The past however has not been forgotten. The Germans are beginning to show interest in an aspect of their history, the subject of which was always full of accusations of relativism and retaliation. They are obsessed with the suffering that was assigned to them in the war. In 2002, Gunther Grass' short story 'Im Krebsgang' (Crabwalk) was published. The story is centred around the sinking of the German refugee-carrying ship 'Wilhelm Gustloff', which was torpedoed by a Soviet submarine shortly before the end of the war. In the same year, the news magazine 'Der Spiegel' launched a series on the flight and expulsion of East Germans. Are the current debates on a “Centre Against Expulsions” that the Federation of Expellees (Bund der Vertreibenen) want to set up in Berlin, or the new exhibition 'Flight, Explusion, Integration' in the Museum of History in Bonn signs of this new interest in the subject? Do Germans believe that this subject has been kept secret for too long? Etienne François refutes this idea. He reminds us that after the war the Germans saw themselves more so as victims and it was only later that they owned up to their responsibility as perpetrators.

The Germans still find it difficult to define what unites them as a people. Conservative politicians have tried repeatedly to create a type of German patriotism. In the discussion on immigration law, the Christian democrats tried to lay down basic rights in 2000, which foreigners should respect if they wanted to live in Germany. So the term 'German Leitkultur' remained vague. In this light, Mohr asks, “is there a definition of a political and cultural German entity”? Even the sociologist Eugen Lemberg wrote in 1964, that a nation defines itself less so by a common symbol but more so by the belief of such a unity. However, perhaps there is still too much scepticism in Germany towards everything that is national for this essential belief to materialise.

That the Germans are not forgetting their past is good news for Europe, because the painful experience of the past justifies the need to overcome national extremes, on which Europe’s concept and success are founded. When the Germans do present their new self-confidence, will this be a cause for concern? Not as long as they pay attention to their scepticism towards a reconstructed nationalism.