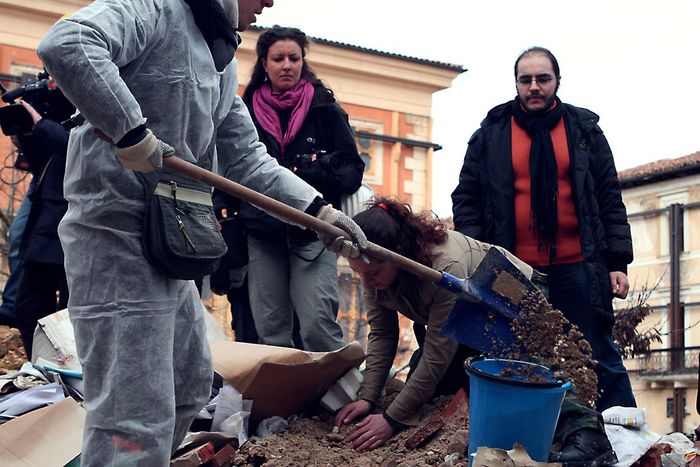 308 victims died in the 6 April 2009 earthquake. Over a year on, reconstruction of the capital of the Abruzzo region is slow. One citizens’ movement is defying politics and criticising the dilapidated state of the town’s historic centre; the story has even hit this year's Cannes film festival. Sabina Guzzanti's documentary received a standing ovation

On the night between 5 and 6 April2009, at 3:32, an earthquake reaching 6.3 on the Richter scale hit the town of L’Aquila, the capital city of Abruzzo in central Italy. The quake completely destroyed the historic centre of the town, an ancient medieval burg, which was home to 70, 000 inhabitants, and which is estimated to be the sixth most important town in Italy in terms of artistic heritage. The total recorded number of victims was 308. Moreover, in the space of just 28 seconds, those 70, 000 people were literally made homeless.

L'Aquila and its wheelbarrow people

Thirteen months on from the quake, chaos still reigns supreme in L’Aquila. One movement which was born completely spontaneously and without any political leanings has been nicknamed the wheelbarrow people. This historic centre is still a forbidden zone which is controlled by military check-points. However, the wheelbarrow people have been protesting here since February, criticising the fact that the rubble still lies in the now-abandoned centre of the town. The movement, which was initially mocked by politicians, has more recently been taken seriously by the people with the power to make decisions. The first operations to remove four million tonnes of rubble from the town centre have begun.

The wheelbarrow movement was initially mocked by politicians

Only after the wheelbarrow Sundays protests, where thousands of citizens organised themselves to prove that positive action could be taken to remove the mountain of rubble still blocking the historic centre of L’Aquila, did the environmental minister Stefania Prestigiacomo realised the true gravity of the situation. She also realised that this group of citizens, a complete cross-section of society which was so determined to reach its goal without any guidance from above, could not be seen to take the upper hand (at least in the eyes of the media) over the politicians while there was an electoral campaign going on. It was truly a lesson for a person who ought to have dispatched someone to oversee the removal operation in the historic centre without a moment’s thought. The outcome was a success for 'rule from below' and for the citizens’ movements which have been getting a foothold in the area over the past two months. These citizens were moved to action by the thought that L’Aquila, at that rate, was destined to die. Of a town which, in theory, has 70,000 citizens, 6,461 are still living in hotels seven months after G8. 2,730 of these

People are still within the province of L’Aquila. The other 3, 731 are on the coast, with 107 of the latter outside Abruzzo. This is not taking into consideration the reconstruction works, which are not yet in full swing. Then, there are a further 2, 376 people in the private apartments which are still supplied with aid, all on the coast, and 1, 196 people are living in so-called 'temporary residence structures', among which are the 926 housed in the barracks of the Guardia di Finanza. The rest are in the Campomizzi Barracks. In total, 10, 028 citizens of L’Aquila still need assistant from the civil protection agency; they have nothing other than a room with a bed, and are still completely dependent on external aid.

Then there is the geopolitical issue of reconstruction or, as many in L’Aquila say, of construction full stop. Effectively, we are talking about building new housing from scratch rather than the renovation or reconstruction of existing, damaged edifices. It is at this point that decidedly geopolitical character values enter the equation. According to the legend, L’Aquila was founded in the middle ages by a group of domineering lords who had their estates on the hills around the area where the town is situated. It is from here that L’Aquila’s numeric symbol, 99, derives. It was this number of landowners who were said to have contributed to the foundation of the city, and in memory of this, L’Aquila was to have 99 churches, 99 small squares and 99 fountains, each to preserve the memory of one of the founders. These people came to found the city for economic, commercial and defensive reasons; or rather, as we say nowadays, geopolitical reasons.

There is currently a sort of reverse growth process taking place, in which the historic centre, now reduced to rubble, remains a ghost town, while in its place new communities, along with new residential complexes and artificial ‘quarters’ of the town, are springing up around the town where before there were just empty hectares of land. There are the new C.A.S.E. (sustainable, eco-compatible and Anti-seismic Complexes in English), a fitting acronym which spells out the Italian word for ‘houses’. There are 19 such complexes in total, none of which are linked together, and they provide housing for 12, 803 people.

This scenario, with its wheelbarrow people who reignited a sense of civic duty among the citizens, and who have lately been posing important questions about the long-term future of the town (most of which are yet to be answered by politicians local and national alike), has been praised by the government on more than one occasion as the 'Miracle of L’Aquila'. But the message from prime minister Silvio Berlusconi which was read out by political representatives from the city on the occasion of the first anniversary of the earthquake, during a public meeting organised by the community council, provoked loud whistling on the part of the citizens present. L’Aquila still has a long way to go. The policies to manage the crisis will have to guarantee the security of an economic, political and social recovery – but so far they have not even been planned, never mind put into place.