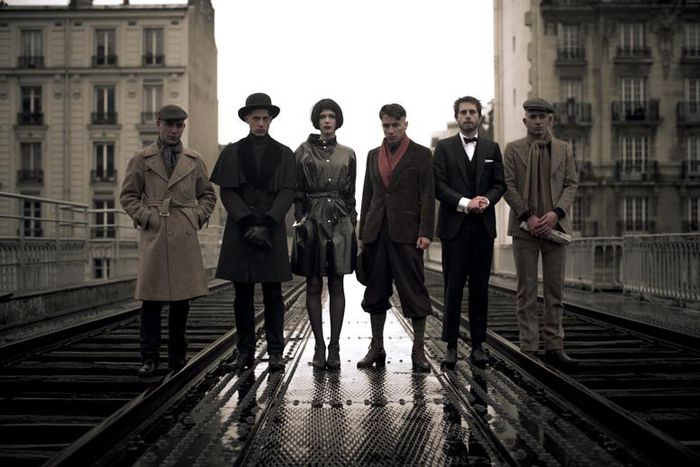 ‘It’s not ‘l’homme’, it’s ‘la femme',’ asserts La Femme's guitarist Sacha Got expressionlessly in response to a young journalist’s question. Sacha performs his role at the press conference like a star at the confessional.  Submerged in a tiny sofa and drowning in a big leather jacket, he responds with the merest hint of a smile to the more absurd questions, embraces the good ones with open arms, and proffers only the most perfunctory of responses as if he were reading the tannoy announcements on the tube.  At his side, Clemence Quélennec, one of the band's several singers, is silent but decorative, sporting a mac, orange stilettos and mirrored Ray-Bans.

It's not that La Femme are shy. We meet them all just before the press conference when they are swallowed up by a mass of journalists. It is evident that they like to tease those who will write about them tomorrow. Nunez von Ritter comes close to kissing us when we comment on his outlandish outfit; we drink it in with our eyes.  Dressed up like a Cuban dictator in uniform – ‘I bought it for four bucks’ – the bottle-blond percussionist is ‘mega hot’ for the group’s debut at rock en seine music festival.  The others, clad in cut-off jeans, nod along in agreement with their leader.  It’s partly for this reason that the organisers have entrusted the group with the second largest stage at the festival - to stir up the masses.

Rock en seine is often seen as a back-to-school musical event. In the 'singing in the French language' class, La Femme may just win the award for best students. It’s good that such a privileged spot has been reserved for these children of the French motherland.  The truth right now is that the three twenty-somethings have won over the masses with their language, certainly, but also thanks to a single which has been re-released no less than three times.

Their track Sur La Planche reclaims surf music, and rapidly became a success that rocketed the group from performing at gig venues in the east of Paris to gigging on prime-time television. Their following singles Télégraphe and Anti-Taxi met with similar success, and La Femme began to seduce the major companies.  ‘We had some complicated moments where we found ourselves outside our comfort zone,’ says Sacha, his feet up on the table.  ‘Local people wanted to meet and talk to us and we just didn’t understand it.  We took our time because things were getting weird.’

Over time, La Femme have started to enjoy their success.  After a self-managed tour in the USA in 2010, the extended ensemble (at any given time the band may number between six and ten members), set about releasing numerous EPs themselves.   Despite being pioneers of the DIY approach, the group swiftly signed with the prestigious Barclay Records.  ‘We wanted to entrust the PR to someone who knew how to do it,’ Sacha defends himself. ‘We’re fine with Barclay.  They’ve given us total artistic freedom.’  The much anticipated first album Psycho Tropical Berlin was promised for 2012, yet only came out in April of this year. It was necessary to come up with the ‘right formula, a good sound’ so that La Femme could fully present their skills. La Femme’s album was a resounding success, with 14 classy tracks which silenced those reviewers who habitually prepare to criticise albums before they even appear on the market.

Once thrown into the entertainment arena, the band have not forgotten to cultivate exactly what made them different in the first place.  At a time when the world has a tendency to reframe the familiar, La Femme has elected to embrace seemingly forgotten pleasures.  Surf music, rockabilly, doo-wop… Sacha and Marlon Magnée (the founders of the band when they went by the name SOS Mademoiselle) have been seeking musical relics in the multimedia library in Biarritz and rummaging through the nooks and crannies of the internet. ‘The first time I heard surf music was in Pulp Fiction,’ says Sacha. ‘But the first time it slapped me round the face was during a Cavaliers gig in Paris.’  From that moment on the two Biarritz residents slummed it in Paris’ Miroiterie district, supporting quasi-clandestine gigs and colluding with other young eccentrics.  In short, SOS Mademoiselle emancipated itself and matured into La Femme. 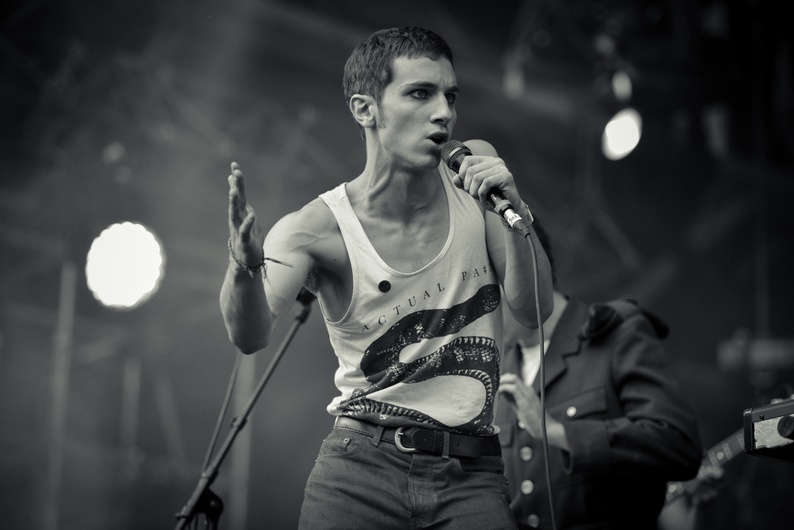 La Femme has morphed, through experience, into a formidable group.  Capable of invoking Gainsbourg himself just by using a theremin, Psycho Tropical Berlin conjures up a particularly bizarre idea of beauty.  La Femme seems wild, naked under her raincoat and more likely to dance the twist in a train station than to sip grapefruit wine in the back of a cab. ‘Tracks like ‘Télégraphe’ sound like the soundtrack  to the underground life of Paris,’ states Sacha.  Their lyrics and videos are frequently cryptic and follow their stream of consciousness: from describing journeys in dodgy expensive taxis to extolling the charms of domestic appliances. Yet as compelling as their music is, a relationship with La Femme may sting.  Sacha concludes that ‘our objective is to inspire others, and to be open to inspiration ourselves.’