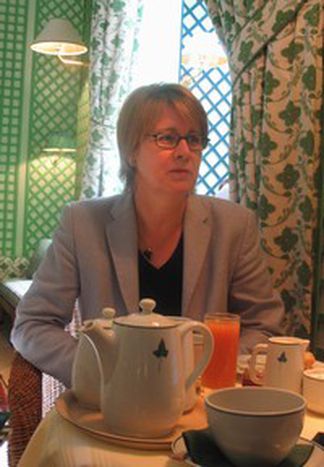 Like many left-wing politicians of the same generation, Krista Sager, the Green Party whip in the German Parliament, has changed her political stance in the last thirty years from one of radical opposition to one of pragmatism.

Krista Sager is treating herself to a little holiday: yesterday she went up the Eiffel Tower and to the Louvre; this evening a visit to the opera is scheduled. The leader of the German Greens in the Bundestag rarely has the opportunity to get away from politics, but has two days in Paris after a televised debate on the French-German channel, Arte. Nevertheless, political developments in Germany are always at the back of her mind: “I don’t make any trips anywhere I can’t get back from quickly, or where I can’t be contacted by phone.”

We meet 51-year-old Krista Sager in a small hotel on the smart Left Bank of the Seine. Copies of Le Figaro and International Herald Tribune are laid out in the matt-green breakfast room, whose flower arrangements give it a homely atmosphere. Waiters in tails sashay around the well-dressed bourgeois guests. Young people arriving in jeans and a T-shirt instead of the customary tailored suit causes confusion amongst the staff, but when we eventually find the leading Green Party politician, we quickly get into in a long conversation that let’s us forget about the uptight flunkeys.

While her husband absorbs himself in his newspapers, Krista Sager tells me she is “from a very mixed European background”. Her grandfather, from the Romanian town of Sibiu, was a Transylvanian Saxon - the son of a German father and Hungarian mother. Her own father, a German soldier, met his Danish wife during the Occupation. “It was actually almost impossible for them to be together. Only after the war did they get permission to marry.” For Krista Sager, who was brought up as a bilingual German and Danish speaker, the Second World War has remained the political point of reference, not least with regard to the European project: “I don’t see it as automatic that we’ve overcome our old enmities. As a child I always used to ask my mother if my [German] brother and [Danish] cousin might end up having to fight each other in a war. That thought made a big impression on me.”

Europe, however, is more than a project for peace. “It’s also about democracy and freedom – in terms of the integration of Eastern Europe, for instance – and prosperity.” A European economic miracle, such as Ireland, Spain and Greece have experienced, should also be possible for the new EU member states. “Ireland was for many centuries the poorhouse of Europe, and now the country has the second highest income per capita in the EU. “Why shouldn’t a similar development be the case in Central and Eastern European countries?” But unlike the American model, Europe is not just founded on “economy and individualism”. What is the European model? Here too Krista Sager sees a need for clarification: “We should try to define a European model that is supported by values and which recognises our social and environmental responsibility.”

Turkey in, Russia out

Despite the vagueness of the term, the ‘European model’ should become the EU’s main export, according to Mrs Sager. “The European Union could provide a template for regions such as the Middle East, where there has been conflict for centuries and joining Europe is out of the question.” Just as our discussion is hotting up, our coffee is getting cold. I pour us a refill. Every region can have its own EU, then. But where does Krista Sager see Europe’s borders? “I would rule out the integration of Russia, Israel and North African countries,” answers Sager, “Ukraine is a difficult subject, because the prospect of entering the EU could split the country. However, I think it is important to build a bridge cross the Bosphorus and bring Turkey in.”

The kind of engaged European citizenship that Krista Sager speaks in favour of has not always come naturally to German Greens: “At the beginning of the 1980s, left-wing parties were rather anti-European. The Socialist People’s Party in Denmark only had their European breakthrough last year. But the Greens understood much earlier the need to ensure freedom, democracy and respect for human rights by extending our community. It was Joschka Fischer [the German Foreign Minister] above all who really pushed the party forward. Today the Greens are a driving force for the European process and Germany is a reliable partner for Israel – none of which was in any way self-evident in the 1980s and resulted from strong intervention on Fischer’s part.

The Greens’ transformation from ideological opposition party to governing party representing the interests of the state finds its echo in Krista Sager’s own life story. In the 1970s she was active in the KBW (West German Communists’ Association) – something which has subtly been swept under the carpet in her official political CV. “That was a completely different era. Social debate was fierce and highly polarised. Nowadays discussion is characterised by those qualities it preaches: tolerance and compromise.” Rebellion against an entrenched, almost anti-democratic Germany has turned into a rise to power on the back of practical policies – an achievement that Krista Sager is carrying forth at the head of the Green Party, in TV debates on Arte and into this mint green Parisian hotel with its conservative morning papers. Political compromise has become Krista Sager’s maxim: “Compromising has nothing to do with cowardice or weakness; it is the lifeblood of a liberal, free society. That’s also very important for the European process: the inability to compromise means a lack of will to create this kind of Europe.”