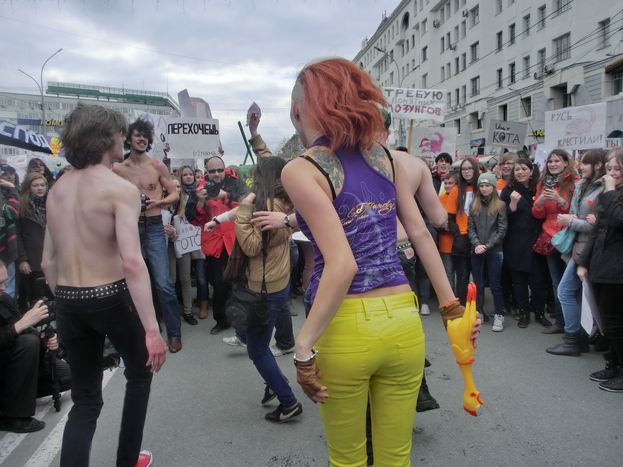 Novosibirsk, the third-largest town in Russia with around 1.5 million inhabitants, is not exactly a cultural hub. Winter lasts for nine months of the year and the town is very isolated (3, 000km from Moscow, 5000km from the eastern border of the European Union), none of which serves to lighten the mood. But once a year, on 1 May, the town is transformed. We meet Artjom Lostukov

In the usually drab Kalinin Square, it's as if the colour has been switched on. The Monstration demonstrators gathered here are wearing bright costumes and and taking pictures of each other holding the signs they've painted. The atmosphere is a mix of street party, carnival and protest, with a little bit of the last day of school thrown in. 'Put a banana in your ear', 'Keep calm and call Lenin': most of the slogans are absurd plays on words, only comprehensible to those in the know. 'I thought 'Good asphalt can't be found on the street' was particularly good,' says Mascha Kiseljova, who organised this year's Monstration together with Artjom Loskutov. 'It's the first one that referred to the 2012 protests in Moscow, when protesters picked chunks of asphalt up off the street and threw them at the police.' 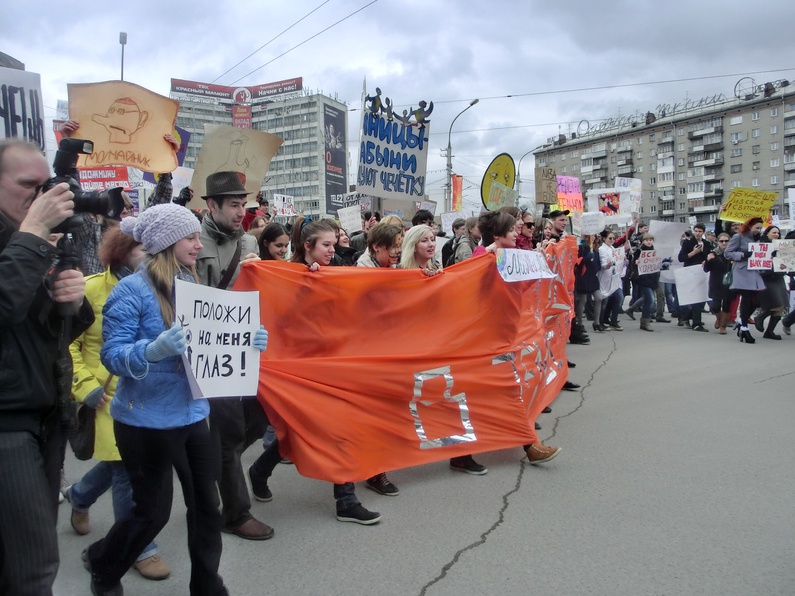 Shortly after Vladimir Putin was re-elected for a second stint as president in 2004, Artjom and his friends organised the first Monstration. Until then, members of many different opposition parties took part in traditional marches on 1 May, relics from the soviet era. 'Every year they have the same slogans, which everyone's forgotten by the next day,' says Artjom. 'It's an absurd ritual, not a political dialogue.' In 2004, around 70 Monstrators took to the streets as part of the official parade, somewhere between the Communist and the National-Bolsheviks, and proclaimed, 'I have crocodiled, I crocodile and I will crocodile.'

'We've gone one step forward and two steps back' 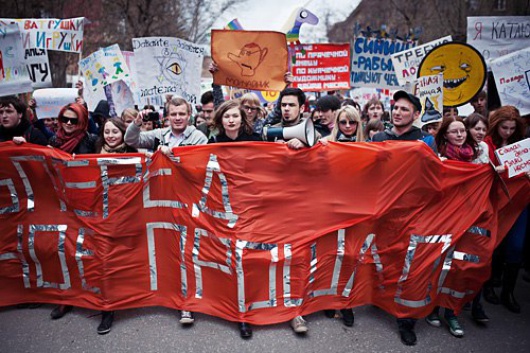 This year, between 2, 000 and 4, 000 people are marching along the Red Prospect (the main street in Novosibirsk) towards Lenin Square. After a long winter, the street is covered in cracks and potholes. It's true, there really is no good asphalt to be found on this street. Loudspeakers announce 'Happy New Year!' or 'Babushka!' when a grandma peers out through an open window. The whole parade stops often so that those wearing costumes or carrying signs can pose for the cameras, as if they were stars on the red carpet. Mascha and Artjom march at the head of the parade holding an orange banner with the words 'Take off into a dark past' written on it in silver letters. 'It's a parody of the soviet slogans, back when there was only a dazzling future,' Mascha explains. 'It's our way of commenting on what's happened over the past year,' Artjom adds. 'We've gone one step forward and two steps back.'

The winter of 2011 saw the largest protests in Russia since the fall of the Soviet Union. Tens of thousands of people protested against vote rigging and Putin's re-election, often touting coded, absurd banners. 'The Monstration often gets compared to those demos,' says Artjom. 'We've experimented with using artistic media as a form of political protest. It's worked well.' 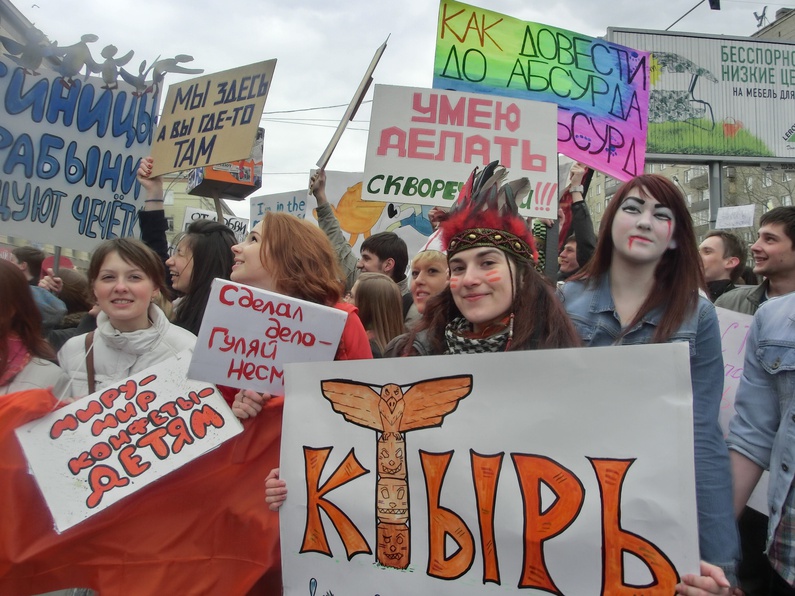 After the mass protests, right of assembly was restricted in Russia, fines were raised and laws were passed introducing stricter censorship of the internet and closer monitoring of NGOs. Many political activists were arrested. A large banner in the protest is dedicated to Alexei Gaskarov, who was arrested after protesting against Putin's third re-election as president on 6 May 2012 (having by this time also been prime minister twice - ed).

Artjom has also been in prison. In 2009 he was arrested by 'Centre E' (an organisation tasked with combating terrorism and extremism) for alleged drug possession, while in 2010 he was arrested for allegedly obstructing the police. 'They wanted me to cooperate,' he explains. 'They came to my university and my family and told them something about satanist activities with dead cats.' Artjom also claims that he and Mascha were beaten up once. But he says he's not afraid. 'I have twitter.'

the town we want to live in

Artjom publicises his dialogue with the authorities through his blog kissmybabushka.com. 'There's no such thing as bad publicity,' he explains. In fact the Monstration is a popular subject in the Russian media. In 2010, Artjom was awarded the ministry of culture's 'innowazija prize' for the best regional project in the field of contemporary art. The Monstration has now spread from Novosibirsk to over fifteen Russian towns, including Moscow and St Petersburg. 'Perhaps that's just the way the market works,' says Artjom. It seems that the 26-year-old understands these market rules better than officials, who mainly belong to the older generation. 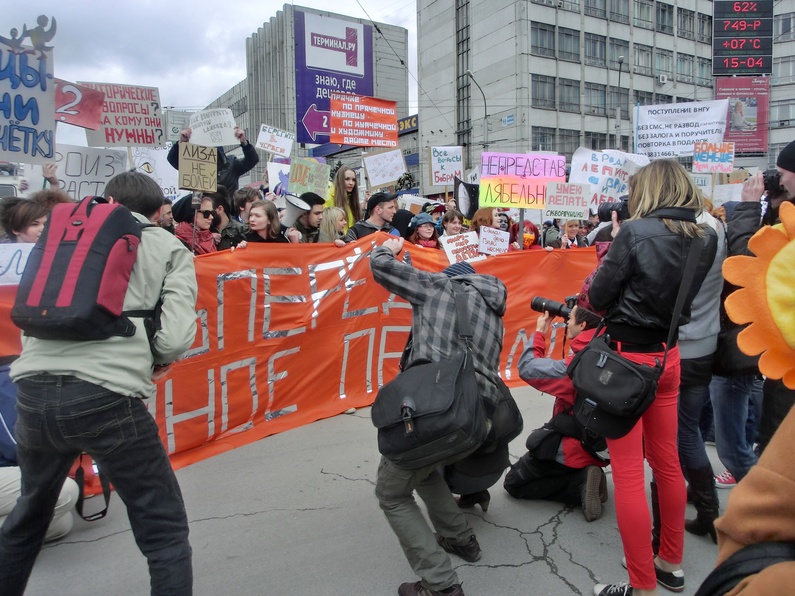 The Monstration finishes on a street corner. Artjom's suggestion of continuing on to Lenin Square is turned down, as the way is blocked by a police barrier. 'They don't treat us like people having a street party, more like criminal extremists,' complains Artjom. The Monstration peters out unspectacularly and after half an hour, the police have cleared up all traces of it. The town is grey and sleepy again, as if nothing had happened.

Just like a decade ago, Putin is still - or once again - in power, but the internet is full of pictures that will be seen all over Russia and further afield. With colourful costumes and banners in front of a Siberian grey background, it's a good effect, perhaps even better in the photos than in reality. 'Publicity is an important aspect of the Monstration,' says Artjom. For him, the photos aren't the most important part. 'Every other day of the year, many of us want to leave Novosibirsk. But on 1 May, we transform it into the town we want to live in.'