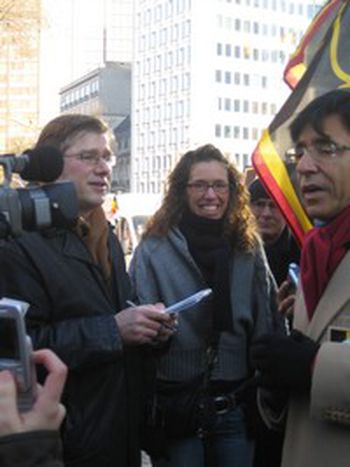 Jean Quatremer: 'there's a lack of passion amongst some MEPs'

Only 55% of Europeans state that they have any confidence in their parliament. On the benches of the French National Assembly, few young MPs are debating. How can the EU attract a new generation?

Frenchman Jean Quatremer, a privileged observer of current affairs in Europe and correspondent of the daily newspaper Libération in Brussels, has been running a blog called 'Coulisses de l'Europe' ('Corridors of Europe') since 2005. 'Europe has forgotten how to convince its citizens about the interest in the European industry. However, this is not obvious to the young generations,' he begins, maybe a sole voice. Born in 1957, this child of the Sputnik era and the EEC reckons that 'the EU must avoid continuing to be this brave girl who never complains when people use her as a scapegoat.'

The youngest European MP, Dimitar Stoyanov, is 23 and a member of the ultranationalist Ataka Party. Is this symptomatic?

Of course! When you have not lived through periods of war, you are forgotten from history. You think that the nation-state is an alternative model. History hesitates and these young people do not even remember the fall of the Berlin Wall. They think that you are exaggerating. It must also be added that the older discouraged ones have become cynical. They no longer believe in anything, for they feel that things are progressing slowly.

So the European parliament is therefore only a cemetery of national and political elephants?

Not at all! This is only true in countries where you can accumulate mandates, like France, but not in the United Kingdom, Sweden or Germany. Look at the German president of the European parliament, Hans-Gert Pöttering: he has been in parliament his entire career!

All the same, don’t you think that a generation of ‘obstruction’ prevents young people from expressing themselves in the big political parties?

People take whatever seat they want. Look at the eastern countries as their leaders are young. We must not whine, but decide on how to fight and kill the father: I do not know of a time when people in power have ever withdrawn voluntarily. Having said that, take the example of the Finnish European MP, Alexander Stubb. He is 40 and you only ever hear of him in the House.

Being young is not a quality: either you are talented, or you are not. And talent is there when you believe in what you do. There is a lack of passion amongst some MEPs. They are political experts, but you get so bored of them during debates at the benches of the French National Assembly! Europe is not talked about in a loving way! Take the example of voting for the REACH legislation limiting the use of chemical products in the industry: no other country in the world has made such an industrial hara-kiri (form of Japanese ritual suicide by disembowelment)! And yet, at the time of voting, the Greens were not always happy and denounced a simple ‘compromise’. On the contrary! Instead of congratulating themselves, they put forward negative messages. We must not be surprised therefore if people reject the EU!