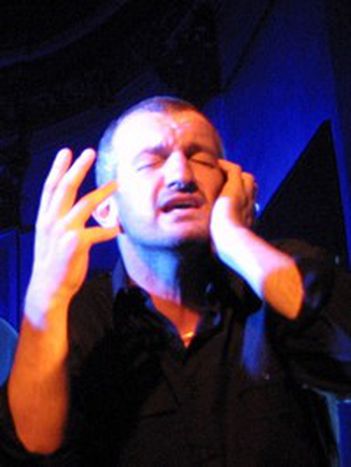 Jean-Claude Acquaviva, and his Corsican roots

The 41-year-old singer and frontman of the harmonic choral group 'A Filetta' talks about his latest album, 'Medea', which compares Seneca's heroine to Corsica and Jason to France.

Jean-Claude Acquaviva's charisma shines through his icy grey eyes that greet me on a beautiful Paris October morning. It emanates from his solemn, almost timeless voice, with which he has led 'A filetta' to the artistic heights of Corsican music. The very evening before I meet him, this 'a cappella' voice, together with those of the other group members, enchanted the audience at 'La Mediterranee des Musiques', in the auditorium of the Institut du Monde Arabe.

However, the Parisian venue was acoustically surpassed by the rural church in which I first heard 'A filetta'. ‘It's true,’ admits Acquaviva in easily understandable Corsican. ‘Concerts like the one at Rogliano (on the Corsican coast) allow us to keep a link with our homeland.’

Indeed, the group tries to keep the simplicity of 1978, when it was founded ‘by amateurs, mostly school teachers or priests. The then thirty-year-old Jean-Claude Acquaviva was already amongst them. ‘For our first trip abroad, to nearby Sardinia, we had to pay our own way.’ Then, in 1994, things began to change. ‘We were at a turning-point, either we continued as we were, or we could start to take it more seriously. We decided to go professional, motivated by the will to do it, and the help of the composer Bruno Coulais and director Jean-Yves Lazennac. We had one duty though - to stay true to our name.’

In Corsican, 'filetta' means ‘fern’, a very common plant which is ‘very difficult to uproot, because of its roots which grow horizontally,’ explains Acquaviva, spreading out his hands in illustration. ‘Not only this, but when a Corsican leaves the island and forgets their roots we say that 's'e' scurdatu di a filetta' (he has forgotten the fern).’

Innovation, but not pop

For Acquaviva though, Corsican music needs to move forward: ‘We want to be great like the others, otherwise we might as well stick ourselves in a museum. Those of us who are opposed to innovation remind me of the damned of Chapter XX of Dante's Inferno who are condemned to walk with their heads facing backwards and cry from their rear-ends.’ But this is no reason to lose the ‘authenticity of Corsican music’. He makes an implicit reference here to the other great group of Corsican harmony, 'I Muvrini', who mixed traditional songs with pop sounds and background instruments. The same is true for their political allegiances. ‘Many criticised us because of our action in the early years in favour of Corsica’s independence from France. In truth though, we're even more militant now then we were before,’ Acquaviva claims enigmatically.

So what links the Corsican cause to the latest album of 'A filetta', 'Medea', named after the two-thousand year old work by Seneca? ‘Above all it is the theme of the woman,’ explains Acquaviva. During the previous night's concert Acquaviva introduced one of the pieces by relating the tragedy of the Latin author. ‘There is no force in the world, no hurricane nor fire nor weapon of war that has the violence of an abandoned woman, nor her force nor her vehemence.’ ‘Precisely’ - reveals the artist who has translated Seneca from Latin into Corsican – ‘I see in Medea the same collective force of the Corsican women who came out into the streets in '90s to protest against the violence of the pro-independence movement.

Acquaviva recognises that he has ‘an ambiguous relationship’ with violence. ‘We condemn instances of bloodshed by those 'working undercover'. But it isn't enough just to condemn.’ He pauses, before continuing in French, becoming more serious.

‘Whether we like it or not, violence is born of injustice. I'm not pro-independence. But we cannot forget one undeniable fact: Corsica was annexed by France, it is a land which is much more Italian than French. We Corsicans and Italians, for example,’ he continues, turning to me, this time in Corsican; ‘we can understand each other. The problem is that our island puts up with too much injustice from France - the elections are fixed, voting is not free. Every time that we want to increase the level of autonomy, the centralism imposed by Paris reacts to protect itself.’

But what does Medea have to do with all of this? ‘Like the heroine of Euripides and Seneca, Corsica has suffered an injustice by France.’ Medea, for the love of Jason, betrayed her father and her homeland and was then abandoned by Jason himself, against whom she avenged herself by killing their two children. ‘A pact was violated, as it was in this tragedy,’ emphasises Acquaviva, his hands flaying in typical Mediterranean style.

The Corsican singer believes that Europe can help to reduce this 'injustice'. Although sceptical about the 'free-market' European constitution, he believes that ‘Corsica could lose everything if the nation states regain the other hand. Because Europe is based on decentralisation, which is something that France cannot understand.’

For 'A Filetta' though, Europe is above all a chance for artistic dialogue. ‘Through the European programme 'Interreg' (which supports joint projects between European regions) we've tried to look at the different faces of Medea in European cultures.’ The show is directed by the Neapolitan Orlando Furioso, with Sardinian actors, musicians from the Livorno school of music, and music composed by Bruno Coulais.

Moreover, every year at Calvi, in Corsica, a meeting is organised between polyphonic groups from all over the world. And who do they feel closest to - their neighbours the Sardinians? ‘Strangely enough, no, their singing is too heavy,’ Acquaviva says, mimicking their accent. ‘I love the Georgians. They have taught us to sing in a powerful way with tenderness and with power.’ As I leave, I take away a memory of the energy that emanates from 'A Filetta', warm and resonant like the Corsican sea, and like the charisma of this singer.