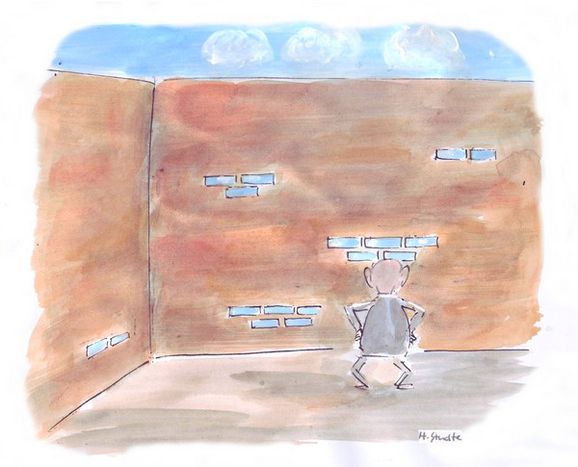 140 kilometres of wall crumbled in 1989 and hundreds of European expressions arose as it fell. The idiom of the week is flavoured by the 9 November event

A 40-year-old Frenchman was 20 on 9 November 1989, a day when he was probably watching images of the fall of the Berlin wall on his television with tears in his eyes. At the same time, a little 80-year-old Polish woman probably couldn’t believe her eyes. That wall had been there for 28 years, it had become a part of the landscape.

, as the ‘people of the zone’ were called in West Germany (although the 'zone' was actually in West Berlin, as it was like an island - ed), were suddenly able to cross the todesstreifen

, the 'death strip' which had separated them. All of a sudden, they were no longer au pied du mur

or with their backs against the wall as the French and English expressions go. It was no longer a question of faire le mur

, to go over the wall by escaping and risking your neck. There was no longer the need to negotiate muro contro muro

(wall to wall). The fight between the east and the west was like fighting against a wall of rubber: lottare contro un muro di gomma

, as the Italians say, in a fight without a solution.

It’s hard to imagine the life that the Germans had before: at that time, communicating with the west was like parler à un mur

or, peculiarly, like throwing peas against a wall (jak grochem o ścianę

) if you were a Pole. When they can’t communicate with the other side, the Germans say that there are walls of silence – mauer des Schweigens

. Happily, between you, me and these four walls

)walls have ears. It was no longer the time to be a wallflower (Mauerblümchen

in German), Time to stop leaning against the wall (podpierać ścianę), in a Polish reference about not being invited to dance at a party. That day, there was no more driving people up the wall

. From France to Poland, it was time to face the wall together - fare muro

, as the Italians say, by ultimately smashing it down.