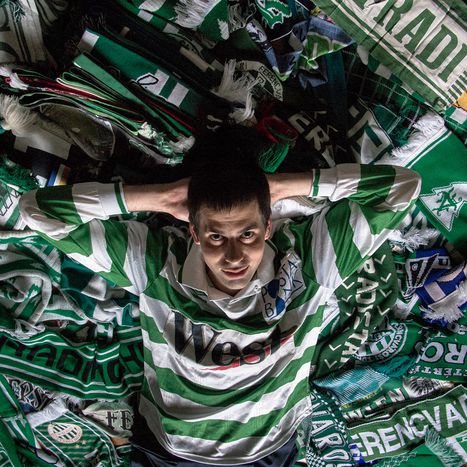 Hungarian football: The business, the violence, the love of the game

Neo-Nazi banners, racism and violence are emblematic of reports about Ferencvárosi (“Fradi” to its fans), the most prestigious Hungarian football club. We investigate the reasons behind this extremism, as well as how economic interests are influencing club policy. Finally, we ask whether alternative outlets for this passionate support are possible.

When you want to spend a little time with someone, the best thing to do is knock right on their door. In the case of Ferencvárosi football club, home is the Groupama Arena: a modern stadium opened in 2014 on the outskirts of Budapest. It exists thanks to a public investment amounting to 15 billion Hungarian forints (about 48 million euros). Passing a huge metal eagle statue at the entrance, the emblem of the team, I prepare for a guided tour.

At the reception desk, the hostess answers cautiously when I question her about the team’s supporters. "We have normal fans, and then we have crazy ones," she explains, "The crazy ones refuse to comply with the new admission policy, which requires a membership card." As well as working as a debit card for purchases within the stadium, the new supporter’s card, introduced by the BioSec society, involves the biometric scan of the palms of both hands. 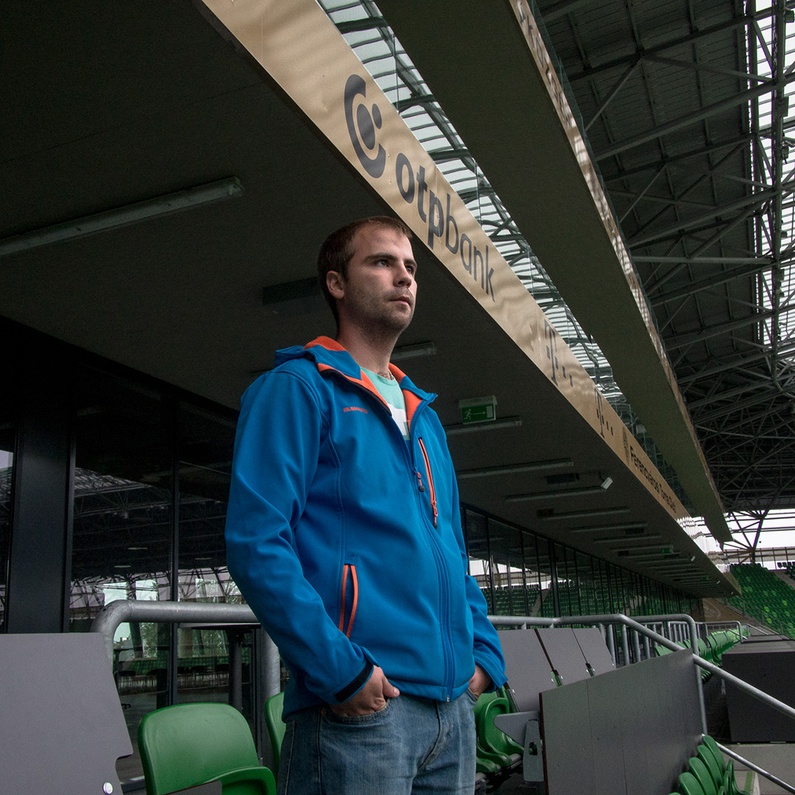 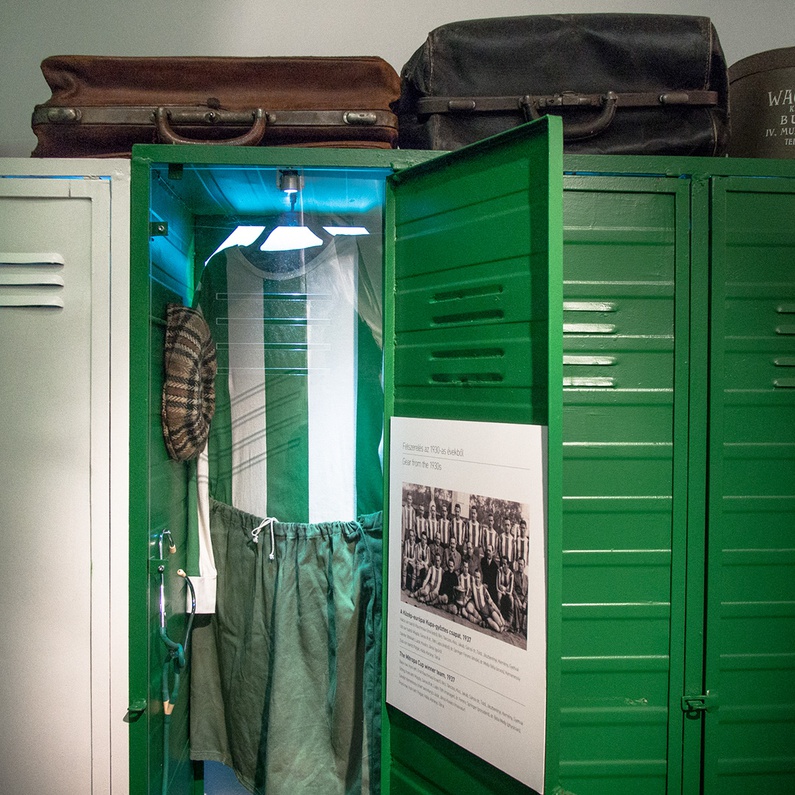 Our tour starts with the Skyboxes. These rooms, of just a few square metres, are rented every year for thousands of euros. Here companies can customise their own private spaces, and discuss their business on comfy sofas surrounded by bottles of alcohol. Nothing could be more distant from the passionate enthusiasm of the average supporter.

My guide is Tomasz. Under constant, drizzling rain we arrive on the grassy playing field, the green as intense as the club’s own colour, painted all over the stands. "I have free access to the entire stadium," Tomasz says,"but I bought a season ticket for the C-2 sector. During matches, I want it to be clear that I am here for the team. Fradi comes first, then work."

Opening up the lockers in the Fradi Museum is like reading a book about the last 100 years of Hungarian history: from Nazism to capitalism, passing through the communist period, the team have consistently changed their name and colours. The museum opens over a boutique, where the official green-and-white uniforms, towels, key holders, and pálinka bottles can be purchased. 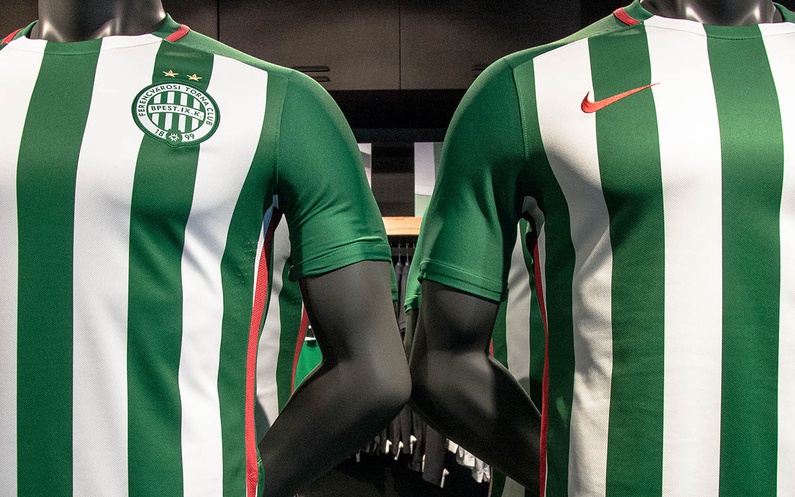 If merchandising makes some people happy, it also drives some away from their passion for the sport. Attila Boro (27), a clerk in logistics, lives out his personal passion in a limbo between love and disillusionment: "I used to go to the stadium all the time. I am no ultra," he explains — a term used for die-hard football fans, often renowned for their violence — "but they taught me a lot. Besides faith in their team they have profound values such as loyalty and brotherhood. They’re no angels, but they aren’t the criminals they are usually depicted as either."

He is bitterly disapproving of the management: "They want to keep all the fans on file. They are driving away the lower classes by raising ticket prices and criminalising those who don’t conform. They prefer people with ready cash. It’s one of the reasons why I don’t go to the stadium anymore."

A dream-like stadium, with nightmarish security.

If the person you want to speak to isn't home, knock on the door of their friend’s house. In this case, I knocked on their enemy’s. I jump on a bus towards Felcsút, Prime Minister Orbán’s home town. The championship match between Ferencvárosi and Puskás Akadémia is taking place today. The roof of this town's little sporting cathedral arises like a fairy tale from the Hungarian moorlands. Here, anti-riot police as well as over 200 security guards occupy the stands. 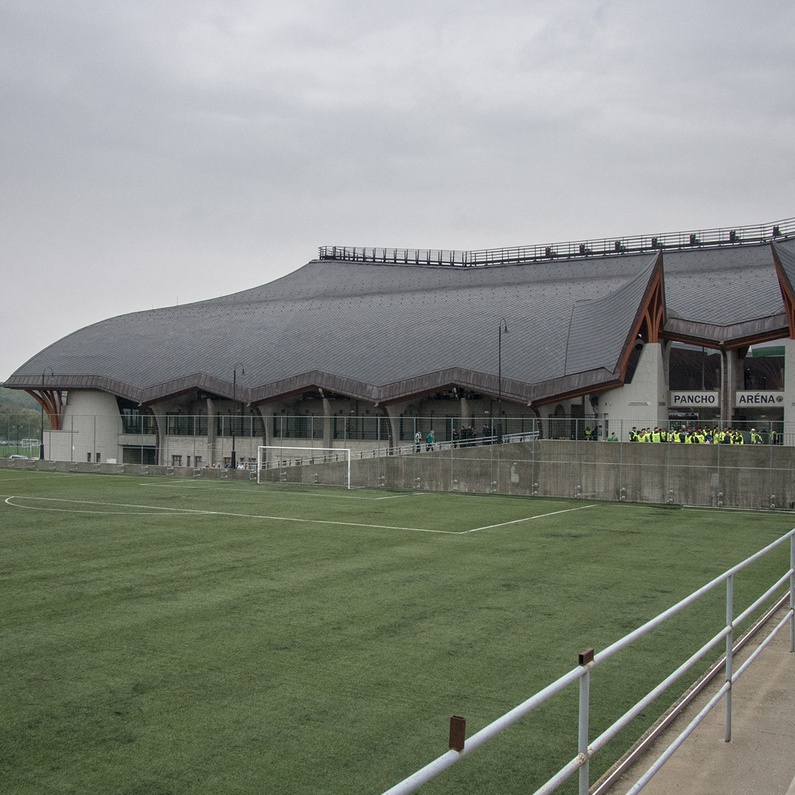 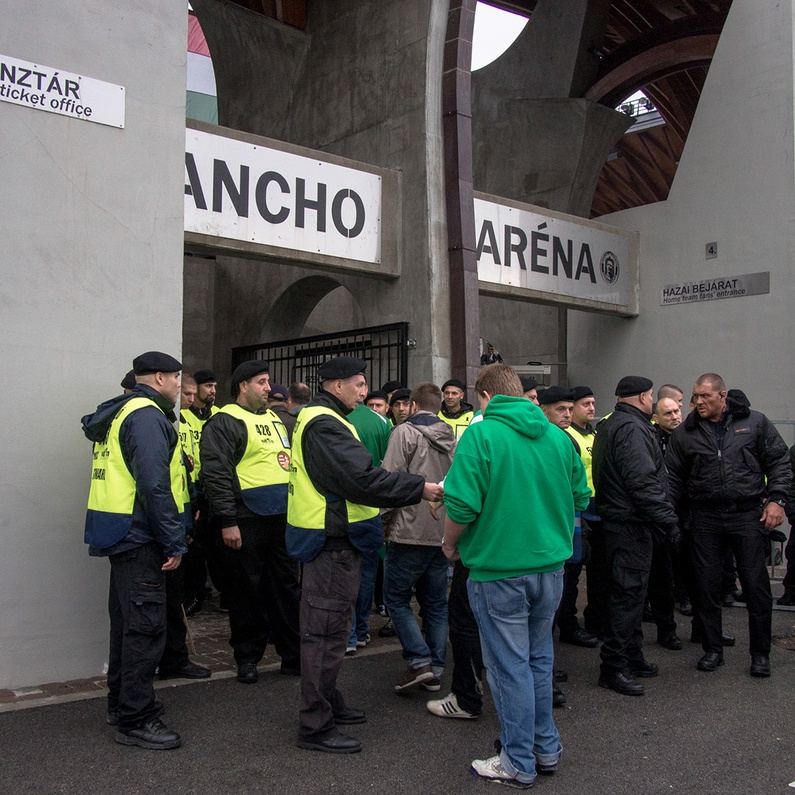 Among them are around 10 men wearing paramilitary clothing with shaved heads, supervising the procedure. "They are on the Ferencvárosi payroll, to intimidate its own supporters," someone explains to me, "They often are ex-ultras, some of them with criminal records." I wait for the bad boys to arrive, to lash out with chants and smoke bombs. I was wrong. The ultras never arrive: they continue to boycott the club. In the stands, only a scant group of supporters, barely cheering. The mood is soon killed and the final result is a 0-0 tie. 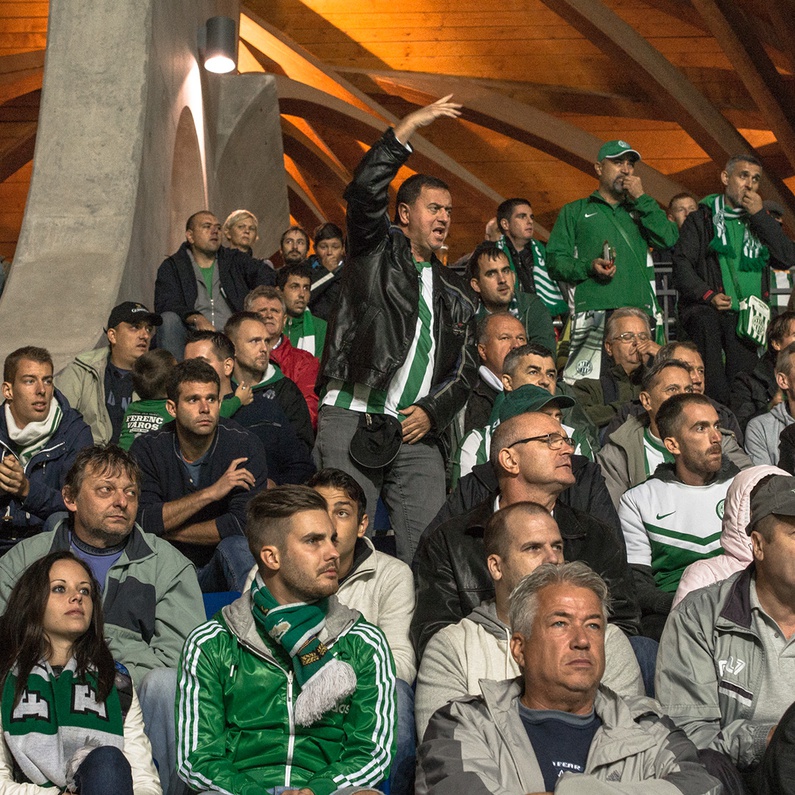 Where are all the ultras?

"The fracture between the club and its ultras is deep. Their aim is to get Kubatov, the club’s president, removed," says Gábor Csekey, curator of the Ulloi129 fan website since 2008. The website, created in order to keep fans updated and to support the team during the demotion to the second division, counts over 20 thousand hits a day, as well as thousands of comments. The origin of the rift, according to Gábor, dates back to 2013: "About 100 ultras entered the stadium to display a banner supporting a Nazi criminal. A lot of companies threatened to withdraw their sponsorship if the club wouldn’t take action." 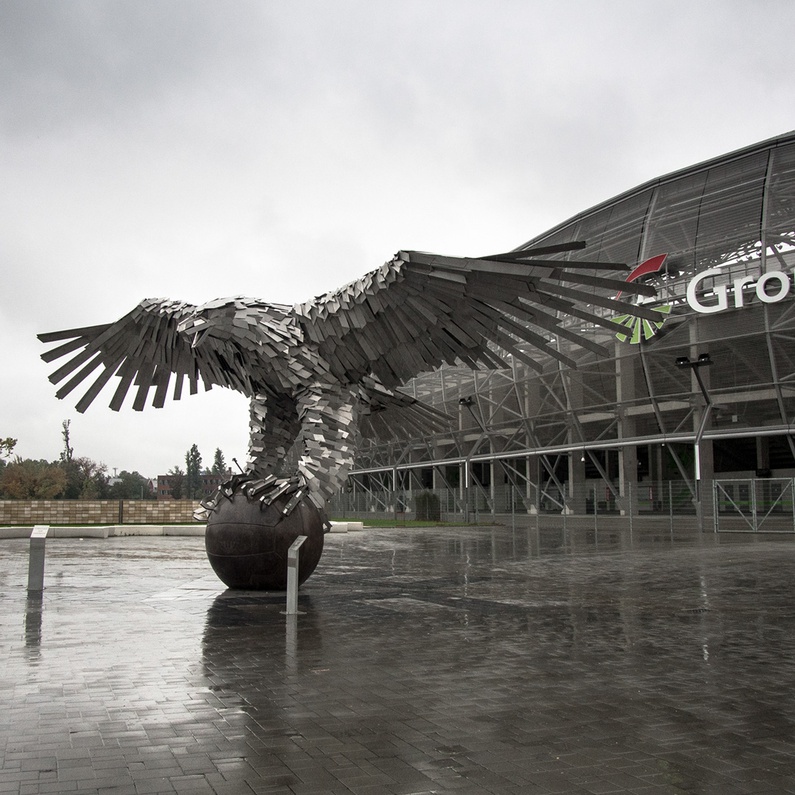 Rather than cutting off extremists for reasons of political correctness, it is more about preserving those interests that tie the club to companies — and the political party Fidesz — for which Kubatov himself sits in parliament.

"The extremists are not more than 100, but they attract thousands of kids, often unaware of the underlying political message," explains Gábor. During home matches a screen is erected outside the Arena: a compromise, so as not to exasperate the ultras’ already hot tempers. "One by one", according to Gábor, "they will come back. Maybe it will take a year, maybe 10. Who knows?" 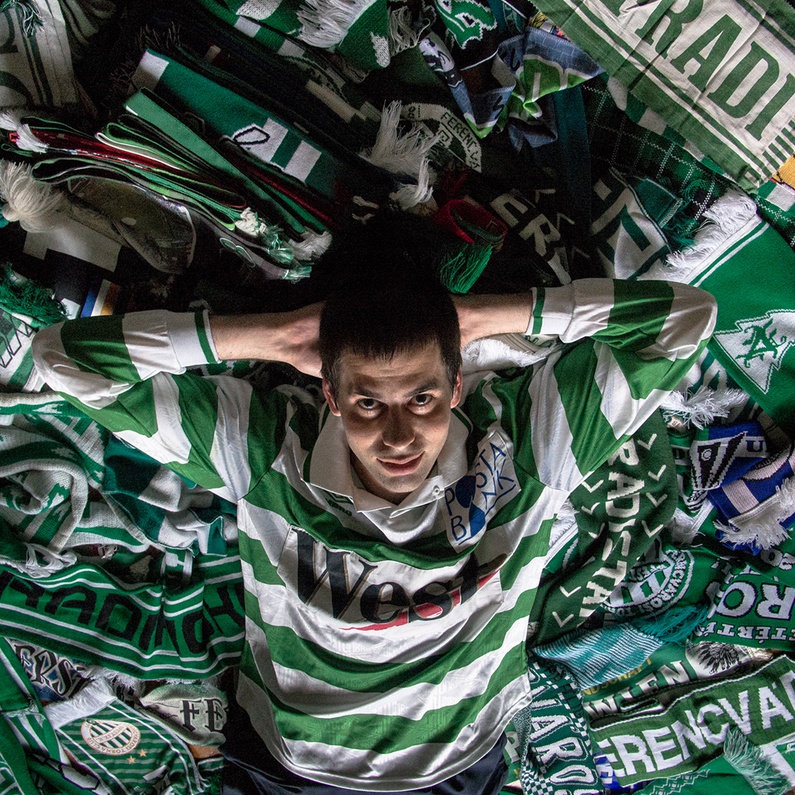 I meet Péter Molnár in the region of the Margit-Sziget peninsula — an area where many Jews sought refuge from Nazi raids — and where Peter’s grandmother converted to Catholicism in order to save her own life.

Peter is the proud owner of a collection of over 100 scarves, dozens of pins, books, and a photo album bursting with tickets and pictures. All of this, original Fradi merchandise. He proudly shows me a little fragment of the Josef Stalin's statue, picked up by his grandfather when the statue was pulled down in the '56 during the October revolution in Budapest. A true relic. 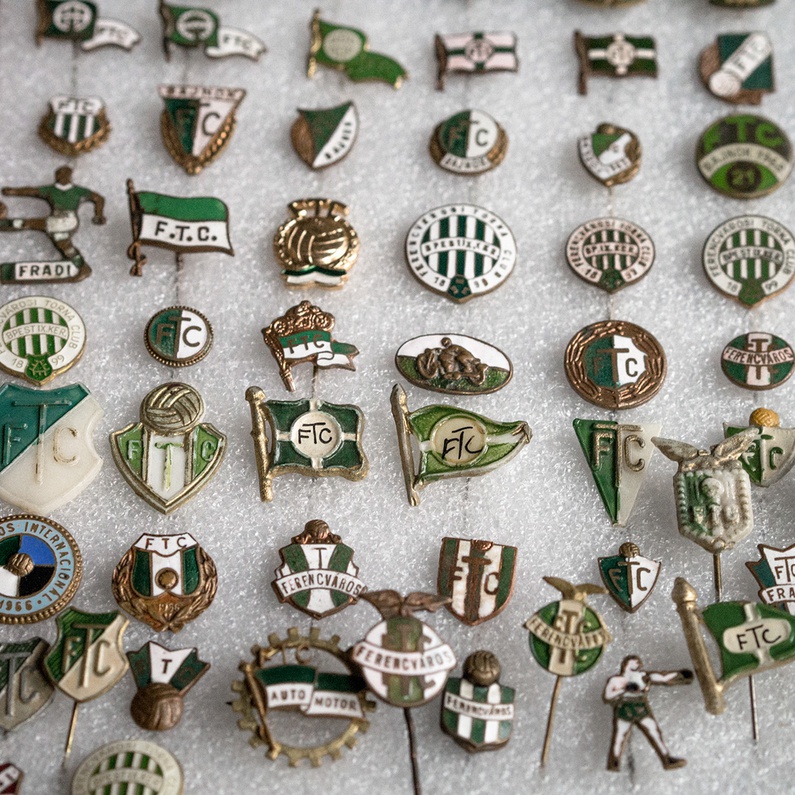 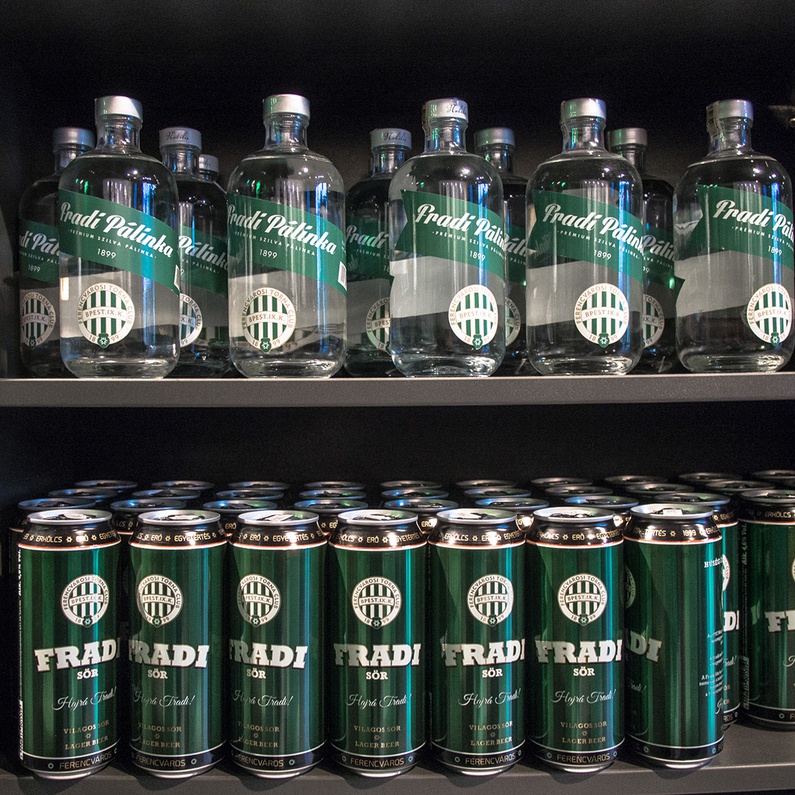 Péter is clear about where he stands: "A kid sees the ultras having fun and touring the country, often drunk. All this can be attractive. I could have been part of it," he continues, "but I preferred not to. If the leaders say something, you must do it. I don’t like it. I can think for myself."

He elaborates, referring to the violence and Neo-Nazi banners: "You should behave in the stadium the same way that you do on the street. It’s OK to unload when you’re stressed by your life and job, but why would you display a Nazi banner in the stadium, if you would never do it in the street or in front of a synagogue?”

At the same time, Péter is tired of seeing an empty stadium, filled with security rather than supporters. "We miss them", he says, "We miss the atmosphere and we miss the guys."

I look at Peter and I understand what pure love for a team looks like: an obsession, maybe, but innocent, and thousands of miles away from all the business interests and stupidity that fill most European stadiums these days. 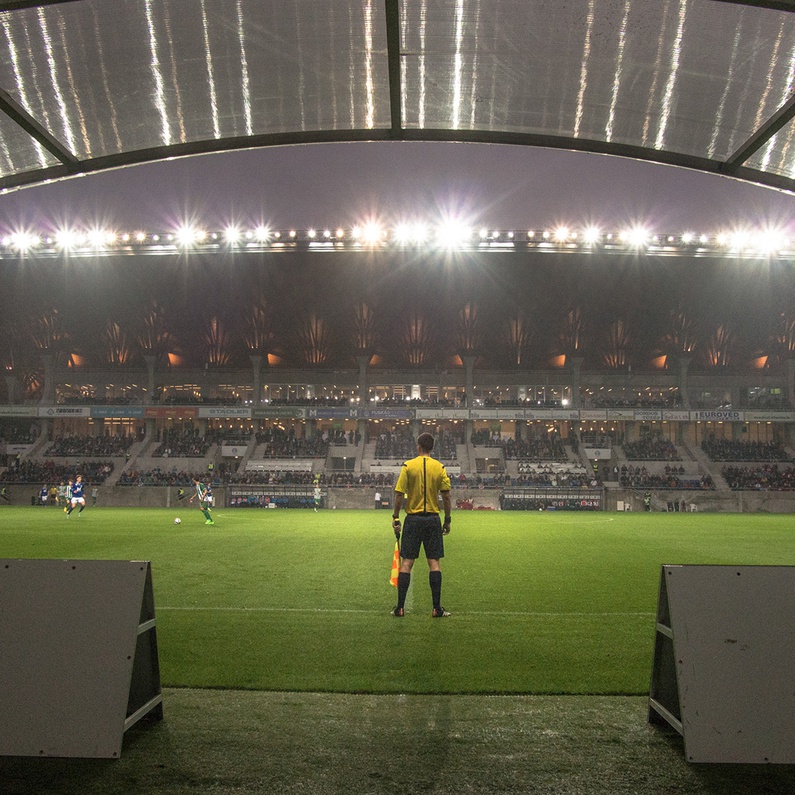