Honey, it's over between us: Article 50, explained

If the weeks after Brexit have taught us anything, it's that the divorce between the United Kingdom and the European Union is going to be painful. Ironically, that's what both parties were hoping to avoid at the summit meeting on the 28th and 29th of June. There's a long way to go until they can officially part ways using Article 50 of the Lisbon Treaty. The process won't be straightforward.

The divorce couldn't immediately be granted in the aftermath of the Brexit result because the EU referendum wasn't formally recognised in European law. In other words, it isn't legally binding. It's almost as if, following a particularly aggressive marital shouting match, the United Kingdom screamed at the European Union: "It's over, I'm leaving you... and what's more, you're ugly!" Harsh words, but perhaps not enough to immediately sever all ties and surrender the keys to the apartment.

The good news is that the Treaty on the European Union (TEU) describes the procedure to follow in the case of such a divorce. These details are found within the now notorious Article 50.

First and foremost, the divorce proceedings must be formally activated. The United Kingdom must notify the European Union of its wish to part ways as well as the conditions by which they intend to do so. Thus, over the past week, European government leaders have urged the British government to make the decision.

But before both sets of lawyers can start negotiating who'll get the car, the dog, the house and the family jewellery, both parties must fully understand what the other demands, and the sort of relationship they're looking for following the separation. Great Britain must "break up" with the European Union before the tribunal can commence – and not just with a half-arsed text message. 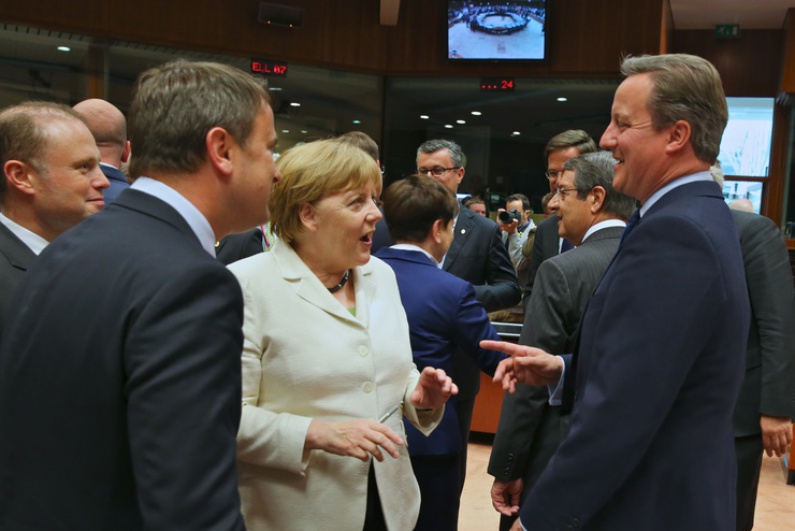 Angela Merkel clarified at the press conference at the summit that there will be no negotiation, "neither formal, nor informal," until Article 50 has been invoked. The 27 member states are refusing to comply with the wishes of their sulking partner, who hopes to start splitting up the CD collection before even filing for divorce. The word '"steadfast" perfectly describes the EU's uncompromising attitude to its new relationship with Britain. There will be no budging. Xavier Bettel, Prime Minister of Luxembourg, has reinforced this view by stating that this isn't like setting your Facebook status to "it's complicated". In this case, you're either married, or you're not.

Forced to resign, David Cameron was quick to announce that he will be leaving the difficult task of officially withdrawing from the European Union to his successor, confirmed today to be the former Home Secretary, Theresa May.

It remains to be seen when May will decide to notify the European Council of the United Kingdom's exit strategy. Political pressure is mounting, calling for a decision to be made as soon as possible.

The negotiating period lasts a maximum of two years and can only be extended if all 27 member states are in agreement. Presently there are no guidelines to follow in the event that a request is made to extend the negotiating period, but it is clear that those involved will have a colossal amount of work. The German Chancellor has stated that "the 27 member states expect the UK to let us know what expectations they have of the EU and whether these are consistent with our own expectations and interests."

Even after 43 years of marriage, not everything is fair game

The 28th of June was a day of emotional farewells for Cameron, as he waved goodbye to his European colleagues at his last ever summit meeting. The next one isn't planned until at least September.

This is part of the reason why the next day's headlines were, for the most part reporting on a non-event: "The prime minister of the United Kingdom has informed the European Council of the result of his country's referendum." Hardly a major story when you put it like that.

However, his ministers and his successor will have to continue to work hard during renegotiations, taking the advice of the European Council who, together with the European Parliament, constitute the EU's legislative power.

Indeed, the treaties state that before and during the negotiation period, which could last at least two years, the United Kingdom will maintain the same rights and responsibilities within the EU it always had until the terms of the separation are negotiated and enacted. In fact, in the coming years, the UK will effectively remain a member of the EU and participate in the decision-making process. Both sides of the couple will have to keep living in the same flat until the contract has been signed.

The negotiations are laid out in Article 218 of the Treaty of Rome. This is the article that the Union uses when it negotiates agreements with third party countries, (those that aren't member states).

The Union is, therefore refusing to grant the UK any special privilege and will instead treat them just like everyone else. As François Hollande explained: "The UK won't be able to get anything outside of the Union that it didn't have inside of it. If they want the benefits of free movement of goods, capital and services, they must also accept the free movement of people." Being married for 43 years doesn't give you the right to break all the rules.

What would happen in the event that the UK decides to rejoin the EU in a few years time? They'd have to join the queue, just like everyone else, while following the procedures set out in Article 49 of the TUE, the article that candidate countries such as Turkey are all too familiar with. It would be necessary to regain the trust and affection of old Europe. No mean feat.

The British public has had enough of experts. Having voted 52% in favour of leaving theEuropean Union, the (Not So) United Kingdom will now start on it’s merry way down the road leading out of the EU. What’s next for the cake-filled, misery laden grey old island? Is this really "Independence Day"? Will the pound ever recover? Frankly, we haven’t got a clue.But a few Babelians might be able to help…