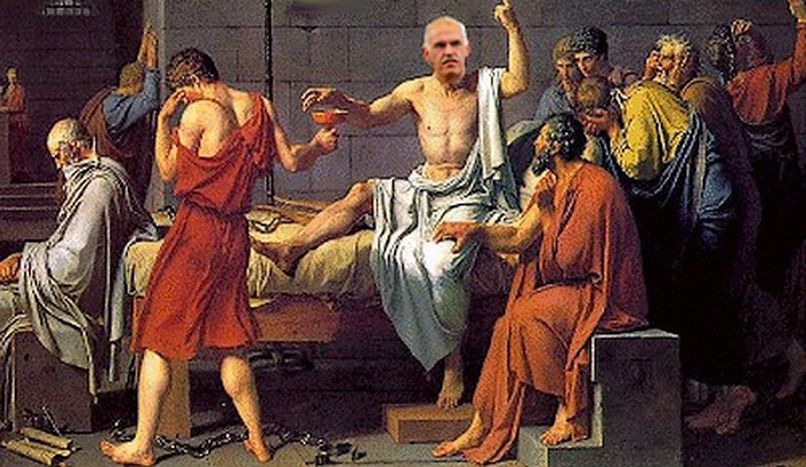 Despite massive criticism and shares dropping worldwide, Greek prime minister Giorgos Papandreou is going ahead with the planned referendum. His cabinet voted for a referendum on austerity measures on 1 November. Some commentators dismiss the move as irresponsible; others praise the democractic act

Europe has shown that it is willing to assume responsibility for Greece. The Greek referendum, on the other hand, testifies to a lack of responsibility towards Europe, the German left-liberaldaily comments reproachfully: ‘By resolving to hold a referendum without consulting other European countries GiorgosPapandreou has cast Europe back into the uncertainty that reigned in the days leading up to the EU summit. Worse still: while in the past weeks there was still room to negotiate there is now the threat of a complete standstill. It's difficult to see a way out of this situation. If Papandreou pulls back again now he will be disavowing his own actions and the anger on Athens' streets and within his own government will only intensify. If he goes through with the plan, (German chancellor) Angela Merkel and (French president) Nicolas Sarkozy, the eurozone states, the EU as a whole, the European central bank and the international monetary fund - in other words pretty much the rest of the world - will have to come up with an idea for how to fill in the time until the decision is made and also what to do if a majority of Greeks votes against the rescue plans’

The referendum in Greece is the right way to bring more democracy to Europe, writes the French left-liberaldaily: ‘Papandreou is posing the only legitimate question: what do the people think of the brutal austerity measures that will come crashing down upon their heads? One must be thankful to the Greeks, the avant-garde of despair, for asking the question and being the first to answer it. In doing so they remind us that economic crises are always a prelude to a decline in democracy. We are experiencing the effects of a purely negative catastrophe-federalism that is leading to certain states to being placed under guardianship, robbed of their sovereignty, controlled by their creditors and effectively governed by leaders elected in other countries. According to this schema the people are no more than a variable and democracy a risky endeavour. In Europe even a positive federalism, equipped with governing and control mechanisms, will also lead to partial losses of sovereignty. This must be counterbalanced by democratic institutions’

The hefty reactions from politics and industry to the announcement of the referendum in Greece prove four things, writes Portuguese economist João Pinto e Castro on the blog portal: ‘Firstly, the idea behind last week's agreement was not to cut the Greek debt by 50 percent but to ensure that 50 percent is paid. Now that the agreement is looking wobbly again the shares have plunged once more. Secondly, the German government is not the only one entitled to worry about public opinion. The Greeks have the say in their own country and their government must answer to them, even if this entails enormous risks. Thirdly, even countries in major difficulties have a certain amount of room to negotiate. It has become clear that both debtors and creditors have a problem because both made mistakes in assessing the risks and in the end both will have to give up something. Fourthly, when muscle-flexing is the only language recognised in international relations everyone uses all the trumps at their disposal to achieve the desired effect’

The flurry over the Greek referendum highlights Europe's true problem, writes the British conservative newspaper, namely the eurocrats' fear of the bitter truth about the common currency: ‘Eurocrats are prepared to pay any price rather than admit that the single currency was a mistake – or, more precisely, to expect their peoples to pay, since EU officials are exempt from national taxation. The peripheral countries are to suffer poverty, unemployment and emigration, the core countries perpetual tax rises, so that supporters of the euro can save face. It's chilling to write these words, but EU leaders are evidently prepared to vitiate Greek democracy and wreck the Greek economy rather than allow the euro to break apart’

Read the full article ‘Financial crisis: Eurocrats are terrified of democracy’ on The Daily Telegraph

The drop in share prices after the Greek referendum was announced is a worrying development, writes Latvian business paper Dienas Bizness: ‘In essence Papandreou wants a referendum on the following question: 'Dear people, do you want us to settle our debts with our international creditors?' One could laugh at the southern Europeans and their ability to get the better of their creditors but unfortunately this policy has far-reaching consequences: immediately after the referendum announcement share prices plummeted on Europe's stock exchanges. It's no secret that Germany in particular is very apprehensive about the fate of Greece, because many German pension funds hold Greek government bonds. So the Germans are less concerned about the Greeks than about their own money. However you can't blame them for that. After all, if the German financial system suffers a blow it would trigger a new crisis all over Europe.’ (02/11/2011)