God Does Exist - And He’s Argentinean

Nietzsche was wrong and Argentinean theology can prove it. Unlike any other religion whose essence is the abstract and the intangible, the southernmost country in the world is home to a religion which is very much based in the real world. 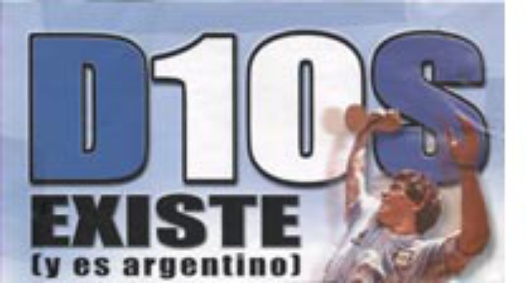 The manifestations of this religion are called dribbles, back-heels and wonder goals. The miracle worker capable of carrying out these feats, God. And his name: Diego Armando Maradona. For this reason, the football of the Pampas is neither sport, nor pastime nor entertainment. Because religion is not a game. And as with any religion, football has its saints and its disciples. Batistuta, Saviola, Caniggia, like so many others, have devoted themselves to spreading the good word around the world, and are worshipped at altars in the most remote regions of the north.

Understanding the whys and wherefores of this religion has inspired many essays and multitudinous explanations. Putting aside global big business, which is there pulling the strings behind each goal, and which represents Evil personified, there is a much more profound and deep-rooted issue which is linked to the idiosyncrasy of a nation. Football is a mark of identity, and the answer to the question “which club do you support?” is crucial. Over there, people are not “fond” of football. No. Each World Cup literally grips an entire country, and to support Boca (Juniors) or River (Plate) is a question of ideology in the same way that someone is left- or right-wing. That’s what it’s like in Argentina anyway.

There are hundreds of convincing explanations for the huge difference between how football is seen in Europe and in Argentina. Europe is big too. And football is a different experience depending on whether you are in Italy or France. The business side remains the same, but the passion is different. Here, on the old continent, people don’t tear each other’s shirts off over a football match. Why is this? Here, it’s rare to see kids going down to the local playing field with a ball under their arm. Nor does an affiliation to a particular club carry the stamp of ideology. And the other big difference could be that football and Operación Triunfo (Spanish equivalent of Pop Idol, trans. ed.) are almost equally popular forms of entertainment.

In Latin America, and especially in Argentina, Colombia and Brazil, there is a sense of being a veritable stakeholder in football, a feeling which leads to an explosion of festivities after a victory and to depressing frustration in the face of defeat. It’s a feeling that can generate violent and regrettable fanaticism. But how not to believe in the first ever religion on the face of this earth that has managed to turn dreams into reality?

That Maradona, and many others besides, were able to make possible the impossible by ascending from the void to the podium has left its mark. That in his heyday he used to perform such incredible moves and that World Cups were won virtually on his talents alone has made a whole country feel permanently indebted to the rather short and heavily built young man who used to play as if the ball were stitched to his feet.

The whole of Argentina erupted with joy during the 1986 World Cup. The goal scored by the hand of God against the English is branded on the country’s collective memory. As is the image of ‘God’ euphorically screaming in front of the cameras in 1994 before being banned from playing in the World Cup on a drugs charge. That day, Argentina went into mourning, clinging to the hope of a biblical resurrection.

To Maradona has fallen the difficult lot of being a Messiah. During one of the scandals over his drug addiction, he declared –implored even- that “I need them to need me”. The Argentineans needed him and still do need him. And yet this intense relationship has practically been the end of Diego, subjecting him to a downward spiral of addiction and hallucination that is far worse than anything the drugs have done to him.

God cannot fail. And God cannot die. Maradona embodies the contradictory nature of the human condition. Altars will continue to be erected to him every time he goes into hospital, and thousands of loyal fans will carry on praying to God that ‘God’ comes through. For even though Maradona no longer does the work of God in the football stadiums, he did succeed in the mission of creation. The creation of an imperishable dream.