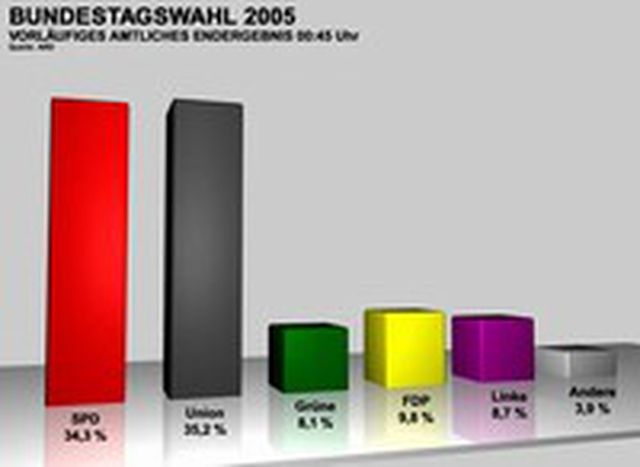 Germany has voted, but the outcome is not clear. Instead of a solution to the difficult political situation in the country, the election has only added to the confusion, meaning that the new government will be weak.

The Germans were no longer happy with the old left-wing government, but neither did they want Angela Merkel, who promised harsh social reforms in the election campaign. Instead of enabling a whitewash, the population of Germany has voted for parties right across the colour spectrum: Merkel’s ‘black’ CDU (Christian Democrats) has a wafer-thin lead over Gerhard Schroeder’s ‘red’ SPD (Social Democrats). The ‘yellow’ FDP (Liberals) emerged as a runner-up, gaining nearly 10% of the votes, while both the Greens and the ‘dark red’ socialist Left Party can be satisfied with their share of the vote, both gaining over 8%.

Who will now line up alongside the chancellor? As neither the conservatives nor the red-green government have won a clear majority, the parties must now begin negotiations. The most unlikely colour combinations are being discussed: red-black, in other words a grand coalition of SPD and CDU, is possible, but so is a ‘traffic light’ coalition between the SPD, Greens and FDP. Not in any way connected to the consumption of soft drugs, a black-green-yellow Jamaica coalition of the CDU, Greens and the FDP would also make up a parliamentary majority.

It is also unclear who will actually become the next Chancellor. Angela Merkel, who won 3 per cent fewer votes than her party rival Edmund Stoiber did in 2002, is the biggest loser of yesterday evening’s events. It cannot be ruled out that the powerful minister presidents (those who have been elected to govern Germany’s federal states) within the CDU could sacrifice Angela Merkel in order to put forward a new candidate. And if a traffic light coalition wins through, the new Chancellor will be the same as the old one – Gerhard Schroeder.

Hardly anyone in Europe can be pleased with this result. Tony Blair was hoping for a black-yellow government to support his liberal vision for Europe. Nicolas Sarkozy, who is aiming to become French president in 2007, will also rue the result. Since he, like Angela Merkel, is in favour of harsh cuts to the welfare state, he had hoped for a clear victory for Merkel. It is only in Ankara that people will be rubbing their hands with glee. Even if the CDU does gain the post of Chancellor, they will not be able to force through their reservations concerning Turkey’s possible membership of the EU.

While Europe remains deep in crisis, one of its most important members will spend the next few years mired in its own issues, unable to give the troubled EU any fresh stimulus. Although none of the possible governing parties are planning a radical change of direction in European and foreign policies, an unstable government with a weak Chancellor can not be expected to make any major moves. German voters were undecided and so they have gained an undecided government. This is not good news – either for Germany, or for Europe.