Italy's Five Star Movement (5SM) recently held a national conference at the Foro Italico in Palermo. We took the opportunity to meet the young people who view the movement as a new political force to be reckoned with. What attracts them to the 5SM at a time when politics has never seemed so far removed from its citizens?

Young people seem to be flocking to the Five Star Movement, seeing it as a more credible and consistent political force than the traditional Italian parties, who do not represent their views anymore or who never really represented them in the first place. Some have gone a step further and have started to work and volunteer for the movement, having never had the opportunity to get first-hand experience in politics without facing fierce competition or exploiting political contacts.

In addition to marking the comeback of Beppe Grillo, the movement's "founding father", important issues facing today's Italy have been put on the agenda for discussion. These include subjects as diverse as the recent rejection of attempts to push through constitutional reform through to TTIP (the Transatlantic Trade and Investment Partnership) and Tunisian oil. The movement's renewed hostility towards journalists was evidenced once again, but more importantly, the conference served to showcase young political talent.

This is not to say that all the militants, enthusiasts, activists and local administrators present in the conference gazebo were under 35, but the majority seemed to be young people from across the entire peninsula. So, who are the members of this political motley crew? I took a look around to see what I could find out.

In the past three years, every media and sociological study undertaken has shown that the 5SM is the favoured party amongst young Italians. Take for example the bi-annual study led by CISE (The Italian Centre of Electoral Studies), which showed in December 2015 that 35.2% of voters in the 18-29 age bracket favoured the 5SM, compared to 32.5% who supported the Democratic Party (PD), whose support rose considerably to 37.3% among  30-44- year-olds and to 42.3% amongst the 45-54 age group. It is no mystery then that the local elections in Rome and Turin last June reflected this trend, leading to to a decisive victory for "younger" politicians, Virginia Raggi, 37, and Chiara Appendino, 32.

Vegans and the party's grassroots participation 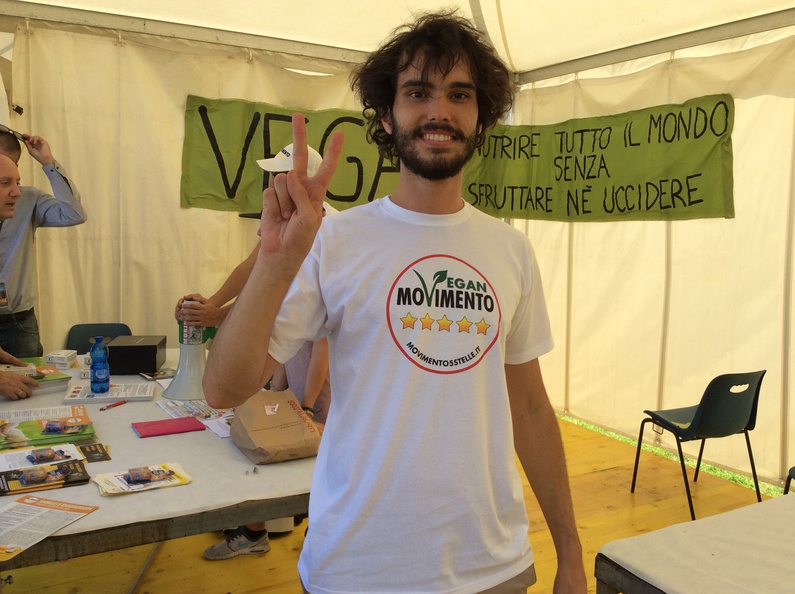 Near the entrance to the conference sits Five Star's vegan and animal rights tent, which is teeming with activists in their early twenties. "I have been a grillino [a supporter of Beppe Grillo, Ed.] since 2010 and I'm from Parma, the city of Pizzarotti" says Matteo Rastelli, a 23 year-old programmer and former adherent of Lotta Comunista [a revolutionary communist party, Ed.], while distributing vegan leaflets and alluding to the first Five Star mayor in Rome, who has long been at loggerheads with Grillo.

"I've been following Beppe's blog since 2010. I was only 17, and I chose the Movement for its consistency and because it gave me the opportunity to participate in politics. Before I even turned 20, I was able to work on drafting a bill for my city, which is no mean feat." Matteo's appearance and enthusiasm seems reminiscent of Mattia Calise, who in 2011 made history as the party's first ever candidate in the mayoral elections in Milan at only 20 years old. So, what about the infighting in Rome and the criticism of the party's top-down hierarchy? "There are many wonderful things about the movement, like all the people I have met along the way. The problem is that we face greater scrutiny by the media, because we are perceived to be a threat to the system."

I meet Giovanni, a 29 year-old Sicilian doctor, who, after years of left-wing activism, has been seduced by the Movement. "In 5SM, so many people from different ideologies and parties have come together," he explains during a pause in proceedings, while enjoying food from a nearby stall. "The parties have stepped on the toes of the great ideologies: the right of Montanelli and Communism no longer exist. Young people are drawn to the 5SM because they can participate from the ground up, and because here, the real leaders are the people."

"The Euro and Europe are a burden" 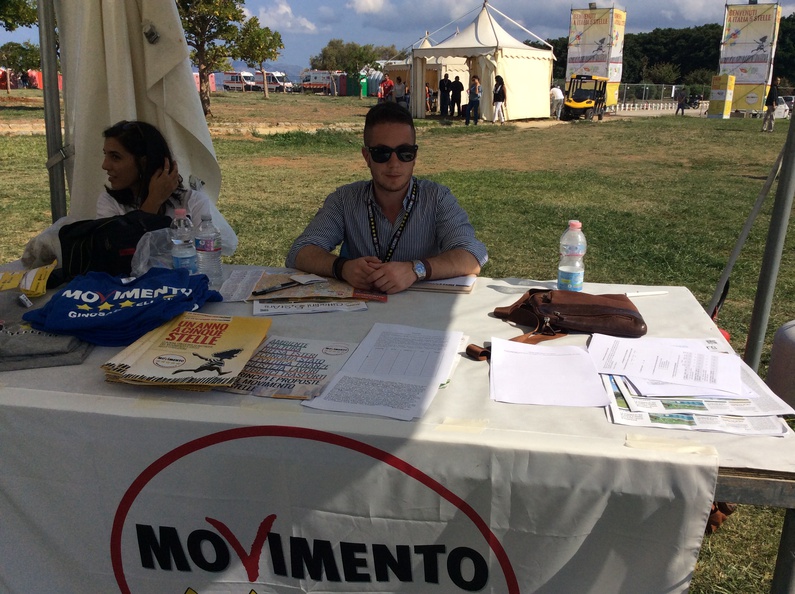 "Trust in political parties has fallen dramatically. The parties are now so elitist that it's impossible to get into politics without connections." Wandering through the stands, it's easy to get a taste of Italy's youthful new municipal administration. I speak to Amedeo Clemente, a 25 year old, who was elected town councillor in Ginosa, a town of 22 thousand inhabitants in the province of Taranto, Puglia in June.

"I've followed the movement from its humble beginnings, even when it garnered little support," says Amedeo. "I was 18 when I became interested in politics. I didn't want my fate to be decided by others and the movement seemed to be the only credible political force," adds the young surveyor, who has strong opinions about the euro: "In order to share a currency, you need to first create a shared political and social culture: if things don't change, the only way for things to improve is to get out of the euro and start the recovery separately. In its current form, Europe is a burden that limits political and economy sovereignty." 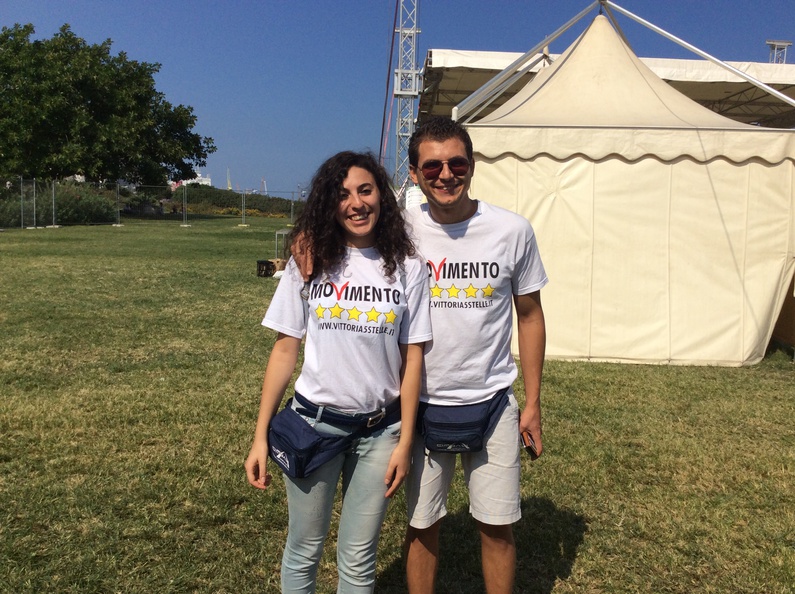 Alessandro, a 28-year-old representative wandering through the stands with his 24-year-old girlfriend Stefania, agrees. They come from Vittoria, in the province of Ragusa, which is governed by Five Star. They are both wearing white shirts emblazoned with the Five Star logo.

"The grillini are consistent and credible," says Alexander. "They are fighting against the dominance of the big banks, who offer nothing other than a form of economic enslavement. Although I would be in favour of Europe, if it were fair for all." Nearby, two young men from Lombardy are also having a heated debate about Europe: "I don't support the EU as it is right now. They said that the UK would face a lot of problems after the referendum, but ..."says Maverick, 25, a shopkeeper who, before Grillo, voted for Silvio Berlusconi.

"The Europe our fathers built was a positive one, but in its current form, it's very different and it's dominated by the banks" echoes friend Andrea, a 25-year-old entrepreneur. "We left Greece to flounder in order to not breach Maastricht terms. I would be in favour of Europe, but I can't support it as it is right now."