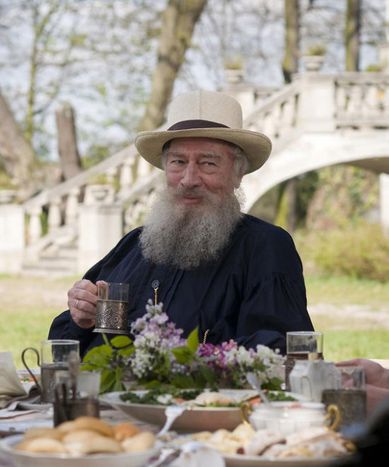 The pre-Bolshevik biopic of the Leo Tolstoy's life stars a British cast and was shot in Germany rather than Russia. A Spaniard reviews the drama, which was released in the UK in February 2010 - the centenary of the great writer's death

The well-established writer Leo Tolstoy (Christopher Plummer) has created a new religion. The tolstoyan movement is a sort of rural christian-communism based on love - the characters in the film talk about love all the time, accompanied by piano music in the background. The movement is also a reaction to the industrial advances and the political poison that threatens Russian people’s purity, the countryman, the mujik. However the movement seems to get out of his hands when he develops his own hierarchy and even an obscure eminence thirsty for control with his disciple Vladimir Chertkov (Paul Giamatti). Tolstoy’s wife of 48 years, Sofya (Helen Mirren), fights hard to prevent her husband from leaving his wealth in the hands of sectarian people. Among all these emotions, the writer of Anna Karenina (1873-1877) just longs for peace, so he gets carried away and takes long walks in the forest together with his secretary. The shy and virginal apprentice Valentin Bulgakov (James McAvoy) himself discovers love in the arms of a lively tolstoyan woman, Masha. 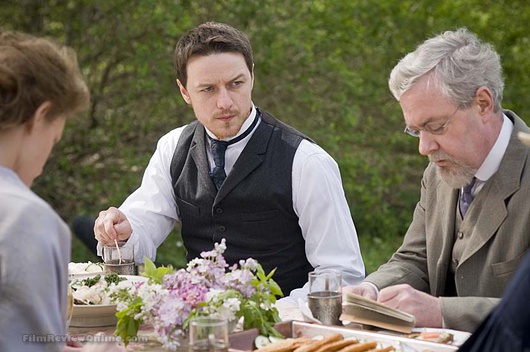 American director Michael Hoffman's characters are proper Russians: men full of doubts and bossy women who shout and plunge themselves into ice cold water. They are people who are continuously writing letters, holding their tears and slamming doors, like in War and Peace (1865-1867). This extreme behaviour (good acting jobs) is a strong match for the strong presence of nature in the film. For almost two hours we hear birds singing or the wind swinging branches, as if the forest were another character.

The unstoppable arrival of modernity can also be appreciated in details such as the gramophone which impresses the sceptical Tolstoy and the prehistoric film camera which goes around filming the ‘movement’. Russia is still not acquainted with the industrial revolution and remains governed by a tsar. There are countless political trends (including the ‘tolstoyan movement’ and other similar ones) planning many people’s futures. This social unrest will be confirmed soon after by the war and the revolution of 1917.

The film is inspired by the eponymous book (The Last Station: A Novel of Tolstoy's Last Year by the American writer Jay Parini, Canongate, 1990). We don’t quite know to what extent themes have been manipulated in order to sell more cinema tickets. Everything indicates that the old Leo Nikolaevich (if you want to speak to someone solemnly, call him by his name and patronym), fed up with preaching austerity while living as the count he was, decided to move to the countryside. He set up schools for peasants in the 1860s and worked as a cobbler to the rage of his wife Sofia Andreyevna (you can also use name and patronym as a sign of familiarity to an old or very respectable person - these tensions were confirmed by Tolstoy himself in a recent imaginative interview with cafebabel.com).

Leo Tolstoy in old age is entertaining. The film is predictable but well acted. However, the story gets distorted or changes depending on who tells it (for instance, the writer’s legendary last words have one thousand versions). There is more: is it a coincidence that the centenary of Tolstoy’s death coincides with Hollywood and the return of Russian writers to publishing houses? Is the film industry anticipating ice cold thoughts, introspection and crime and punishment as the new gold mine? In any case, we welcome it.

Images and video from the film Sony Pictures Classic, 2009