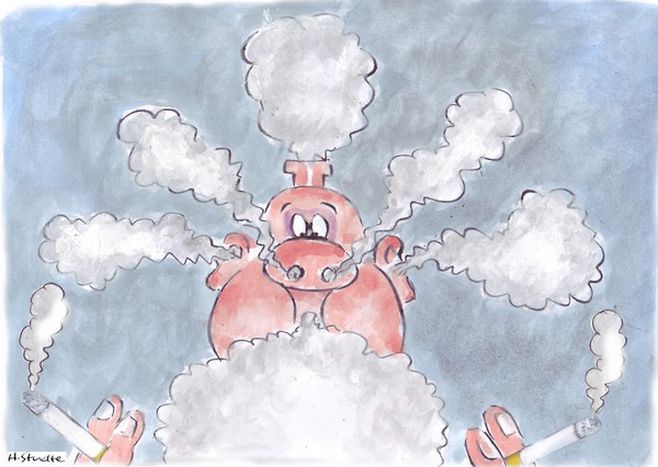 It leaves traces of tar in European lungs, but cigarettes are also impregnated with the bitter odour of the vocabulary of European tongues. Idiomatic expression of the week, plus audio

The words smoking in English, Rauchen

in Polish, rökning in Swedish and κάπν ι σμα in Greek represent a tradition that has become rooted in Europe's 27 member states.

Tobacco originally came from America and was taken back to the New World by Spanish conquistadors. There, people smoked pipes to cement peace. This bit of history can be seen in the German and Spanish expressions die Friedenspfeife rauchenfumar

and la pipa de la paz  (to smoke the peace pipe). The name of the tobacco plant doubtless comes from the Arabic word tubbaq

, which, in the Middle Ages, ironically meant a root with purifying properties. However, the word cigar retains its typically Ameridian aroma since the Mayan word for the famous solanaceae (nicotine is part of this family) is pronounced siyar.

Conscious of the 650, 000 deaths that smoking causes each year in Europe, 140 million EU citizens have resolved to put their ashtrays away in the attic: they are determined to no longer, as the Spanish say, fumando como un carreterro

(smoke like a Hackney coachman), in reference to those professionals who are in a hurry to see their clients get back in their cars and go.

When someone refers to a person who smokes like a chimneyRauchen wie ein Schlot, the Germans compete with the Hungarians Füstöl mint a gyárkéméni to describe this fatal addiction. If the nicotine-addicted Italians smoke like Turks (fumar come un turco

), it is easy to imagine the particular affection this nation holds for smoking pipes. The French expression, fume comme un pompier

(smoke like a fireman), reminds us of days gone by, when the ancient vehicles of this prestigious body of fire-fighting elite scoped out from afar the powerful curls of smoke rising from their convoy.

Today, the health authorities are trying hard to eradicate this habit by forcing distirbutors to display warnings on every packet about the dangers of this obnoxious custom. The slogans range from terse to cutting: from Smoking kills (in French and Polish, Fumer tue

(Smoking can lead to a slow and painful death).

Users of Viagra can’t say they haven’t been warned! After decades of advertisements, cinema or music idealising it, it is clearly very difficult to renounce this act of divine inhalation. Who amongst us does not remember the words to the song by the Spanish actress Sara Montiel? Fumar es un placer genial, sensual… ('smoking is a wonderful, sensual place'). Ok, I swear, I’ll light up one last one and then … I’m quitting!

First published on cafebabel.com on 10 September 2008