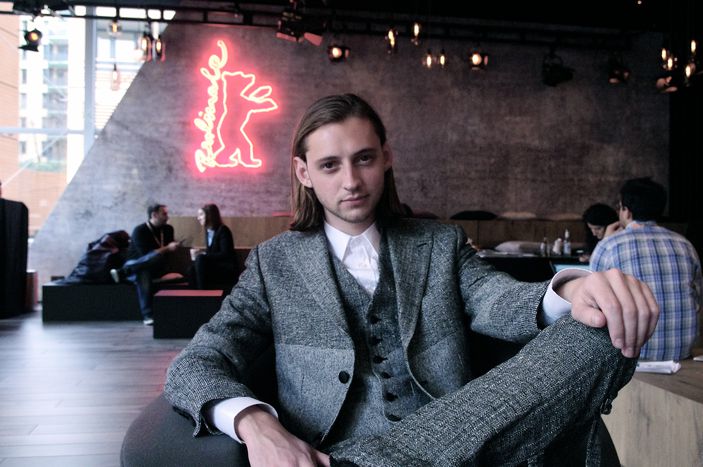 When I meet Atli Oskar Fjalarsson at Potsdamer Plaz, I initially know very little of the Islandic European Shooting Star at this year's Berlinale. This should change soon though, for both me and the wider audience, because the likeable actor has already opened up to Hollywood.

At the age of 12, Atli Oskar did voice acting for comic figures and thus layed the groundwork for this acting career. Two years later he starred in Rúnar Rúnarsson's award winning film 2 Birds. This was followed by further roles in films, short films and television shows. He recently worked once again with the Islandic Rúnar Rúnarsson on the film Sparrows. The film was  honored at the recent film festival in Toronato and in it Atli plays a frightened teenager. The Berlinale 2016 is a first for him in the German capital.

Cafébabel: Is this your first time at the Berlinale this year?

Cafébabel: Did you have some time outside of your Berlinale appointments to explore the city?

Atli: Unfortunately, till now I've only had fleeting glimpses through the car window as I was driven to about 15 different places. I definitely want to come back and get to know the city properly. Jella, the German Shooting Star, has already told me that I can come visit her and offered to show me around.

Cafébabel: And apart from the city, how do you like the Berlinale so far?

Atli: Great so far. It is a huge festival , one of the largest in Europe. It's also really cool to come here and meet a lot of people and see all those magnificent lights and the red carpet.

Cafébabel: How does it feel to be at this year's Berlinale Shooting Star?

Atli: It is always a great honour to be awarded and it's always nice when someone pats you on the shoulder and says, 'Well done!'. I think that everyone strives towards this recognition.

Cafébabel: Can you briefly tell us about yourself and your career so far?

Atli: When I was 12, I did my first synchronizations andwith 13 I shot my short film 2 Birds. The film was shown internationally at festivals and thus started my career. At 16, I had my first character role and since then I have been working quite continuously in Iceland. Recently, I moved to Los Angeles to study drama there.

Cafébabel: Which school are you at and why did you decide that?

Atli: I decided to do a three- year Bachelor program at the New York Film Academy. I always wanted to learn how to really act. Although I have a natural flair for acting, I also always wanted to learn what else is involved, learn more about the founding fathers of acting and how they found their rituals. I want to know how to prepare oneself, how to take a script apart. I want to learn all this. I've now been in Los Angeles for a year and a half.

Cafébabel: So you want to conquer Hollywood, is that your goal?

Atli: The USA has always fascinated me. I applied for jobs both in New York and Los Angeles and when they accepted me in LA, I  went there. I certainly don't regret it as LA is an awesome city. I really enjoy being there as it is always sunny. It's incredible.

Cafébabel: How would you describe the difference between Iceland and Los Angeles as well as between Europe and the USA? In terms of acting and working?

Atli: I think the work is very much the same. The methods are similar. Acting and film speak a universal language. You got to the set and there it doesn't matter whether it is for a small arthouse film in Iceland or for a big budget Hollywood movie. The mehods and the ways in which the film is shot are the same. Essentially it's the same, even if you use different names for things and speak in different languages. I really love working in Iceland because you get close to each other and grow into a sort of family.

Cafébabel: Do  you have your own favourite actor?

Atli: Ever since I little, I really liked Tam Hanks. I love everything he does: Forrest Gump in particular. Cloud Atlas is my is my absolute favorite movie. There are, of course, also Iclandic actors whom I really like, like Ingvar Eggert Sigurosson who played my father in Sparrows. I often saw him in films when I was a small boy and to be allowed to act along side him in my last film was a dream come true. This was definitely one of the highlights of my career so far.

Cafébabel: Which other Icelandic filmmakers or actors should one get to know?

Atli: Grímur Hákonarson is a great director and a friend of mine. I would also say Rúnar Rúnarsson. There are many good Icelandic filmmakers, as well as a lot of new, young talent.

Cafébabel: What is your idea of unhappiness?

Atli: For me, unhappiness manifests itself in lonliness. Lonliness can have so many forms. You can be in a crowd and yet feel lonely and it is that what I see as unhappiness. I also think that we have to start dealing with depression differently. Especially when it comes to men and teenagers, when they feel lost. They struggle to express their feelings. When men cry, it is seen as unmanly and inappropriate. This often leads to isolation.

Cafébabel: What is your idea of happiness?

Atli: In the moments when I am happiest, I do not think of happiness. I think that happiness or luck is an oxymoron. I have this feeling that we only think about it when we don't have luck or are enjoying and luck. It is in those moments that we look for happiness. If you are really happy, you don't consciously realise it and you don't think about it, you simply move through life without stopping and pondering.