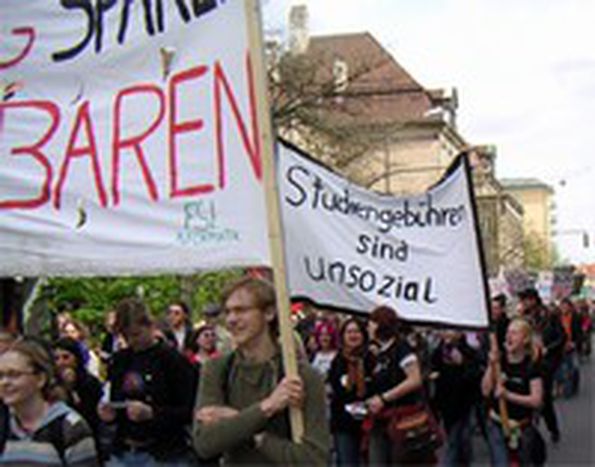 Although the Bologna process is slowly but surely gaining ground in Europe’s lecture theatres, there are those who are expressing concerns vis-à-vis the consequences of reform.

The second European Education Forum (EEF) will be held in Bergen, Norway from 20 to 22 May on the fringes of the inter-ministerial conference. In the beginning, the challenge was simply to create a platform for alternative debate on higher education. Today, the EEF brings together 30 rather radical European education organisations, including Sud from France, Altrascuola Unicobas from Italy and Scuday from Germany. The EEF is an atypical association created along the lines of the European Social Forum and claims to be open to any individual or group which adheres to the 11 EEF Principles adopted at the inauguration of the EEF in Berlin in September 2003.

At that time, several hundred demonstrators, who wanted to put social issues back at the heart of education, came together in response to the eponymous ministerial summit. As a place for networking and discussion, the EEF hopes, on completion, “to co-ordinate homogenous action” across the continent and “to represent a solid network”. Its aim is to denounce the scheduled commoditisation of higher education. By criticising the Bologna process, the organisation crystallises the fairly widespread discontent which surrounds new European education policies such as the liberalisation of education and the standardisation of courses. The arguments expressed by this organisation are thrown out any old how. But if the EEF is only at the mumbling stage, it has at least raised an important question: what is the future of the right to learn, which is in essence unselfish, in a system which is following in the footsteps of the economic model and which is concerned with profitability and performance?

Marry-Anne Karlsen, a 25-year-old Norwegian student, is part of the organising committee of ‘EEF Bergen 2005’. Why did she join the movement? “Students today are seen as consumers, not participants”. Since the Bologna process was introduced in her country, which was a pioneer as regards application of the reform, she has deplored “the obvious commercialisation of education. Through the creation of compartmentalised disciplines, the ECTS (European Credit Transfer System) has led to a fragmentation of knowledge and thus a weakening of critical thought”, she explains. “Further, there is a democratic deficit: to make faculties perform better, the influence of student organisations in the decision-making process is being restrained.” Although the EEF does not contest the internationalisation of higher education, “it wants to go beyond the nice official words by examining its real implications, such as the assertion of the principle of competition to the detriment of greater co-operation.” Marry-Anne thus highlights “significant secondary effects, such as the permanent battle by small European states to preserve their linguistic identities and the impact of measures such as the proposed Bolkestein Directive [which will liberalise services].” Some go so far as to contest the exclusive and elitist nature of the current discussions. “A more democratic format is required so that we can become partners”. On the programme of the second EEF, which will take place at the University of Bergen, the invitation specifies “no meetings with polar bears or trolls”. “Several issues will be discussed: from the effect of GATS (General Agreement on Trade in Services) to the future of tuition fees and alternative education methods”, Marry-Anne reveals. She finally concludes that “we would like to create a sort of observatory which would register the advances of the process in the countries concerned and would serve as a data and analysis bank. And, the launch of an International Student Day on 17 November will demonstrate that education is a right, not a product.”

Through their repeated protests, the students reproach the reform for several reasons: it makes higher education too academic; it makes it more difficult to combine education and part-time work; it threatens the allocation of grants before achieving Masters degrees; it disadvantages women in terms of equal opportunities; it disturbs interdisciplinary courses by forcing students to choose single-disciplinary ones; it is heading for a quota system by another name for admission to the masters stage; it flouts equal opportunities as regards social origin; and it is heading, globally speaking, towards the excessive intrusion of the economy into higher education. The ESIB, the National Unions of Students in Europe, a member of the working group on the Bologna process, has voiced its concerns as regards “the ambiguity of the term ‘competitiveness’”. Although such a term implies transparency and quality, it also risks increasing privatisation and the brain drain, something to which the ESIB is firmly opposed. “Similarly, the organisation is wary of” the hijacking of the Bologna process by governments seeking to profit from it to push through their own national reforms.