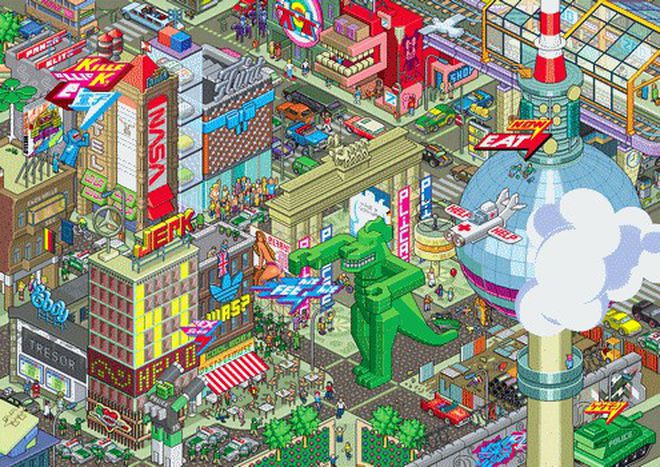 London, Cologne, Venice, Tokyo: the German design pixel group pixelate city visions and hail themselves as a jazz band. They are guilty of simply improvising the definitive concept of ‘urbanity’

Kai Vermehr, 43, Steffan Sauerteig and Svend Smital, 41, are ‘eboy’ – a graphic pixel group founded in 1997. Eboy have designed funny posters, newspaper illustrations and other materials for fashion designers like (British) Paul Smith from individual pixels. It’s been hard to get all three together for one sitting. So, on a damp and cold Monday in Berlin, I talk to all three via videochat, which they prefer as they work in different offices spread across the city.

How old were you when you finally packed away your boxes of lego?

What do you mean they are still out! If anything we have even more now than when we were children.

How do you carry out your work in the weekdays? Do you work with Photoshop or have you developed your own programme?

Pixels are our small building blocks. We do actually work with Photoshop, with the ‘PenTool’ to be exact; it’s the simplest webtool, it works like a pencil. With this we build up levels of pixels and store a house or a tree or a person in a database. The biggest pictures evolve then through this. We think over how we compress and pack the objects from our library. We change their appearance, their colour and work with Photoshop on many levels so that we can change the small details over and over again.

How long is the formation phase of a picture of a city?

It differs vastly. But it takes at least one to two months. It can also last years because we are simply incorporating something new into them again and again. 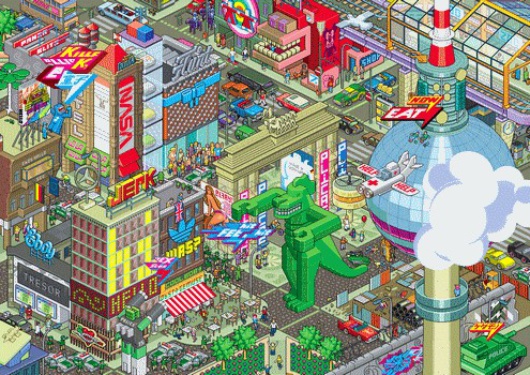 Are the pictures also affected by your travels or everyday experiences in the cities?

At first we searched for typical landmarks so that you could definitely recognise the cities. But of course there is a lot of ourselves within them and definitely also a lot of what we experience or have experienced in the cities. What happens is not planned; on the contrary it is a result of fantasy and trickery.

These days, cameras promote more and more mega pixels and better resolutions. Your design is deliberately coarse and grainy. How did you come by the idea of these counter-rotating aesthetics?

We simply began to draft pictures on the computer screen, an eternity ago. Eboy has been running since 1997. Hey, we’ve been going longer than google! (laughs all round). In any case we saved our first pictures on disks and distributed them between friends and acquaintances. We told them if you like them then pass them onto your friends. So we became better known. It is still fun today to work directly with pixels. What we do is not calculated on the limits of current trends of better and better resolutions, nor is it a conscious ‘retro’ fad. 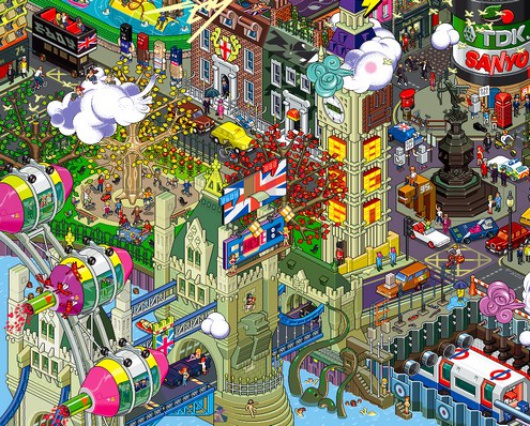 We see very little organic on your wildly-colourful drafts: little green, few animals, even the people look as if they have been made out of plastic. In addition monsters trundle through the scenery. Is this hostility the future of cities?

Not that we are aware of! We could just as easily create a picture of a jungle. And we will do that soon, good idea! The pixelated objects have the capacity to look rigid and straight like they would if they have been drawn with pencil on paper. Nevertheless allowing it look good is a challenge. It has nothing to do with hostility or the future; on the contrary it is much more a result of simple medium which serves us.

Which concept of urban living do your drafts hide behind?

None at all! (laughter). No, honestly. In our pictures there is everything but no theoretical pretensions. If we find something cool then it’s got to go in. It’s a gut feeling. And consequently it’s more important that if there is a monster in it somewhere, it’s because it provides a concept of urbanity. Eboy is like a jazz band: we improvise.

What does Europe mean for this gut feeling of yours?

Europe: that is an accumulation of different impressions. The Berlin poster really unifies everything that takes place during change in Europe: east and west growing together, so much happens here, the city is so young and wild.

To what extent is the history of the areas incorporated into a picture?

We love beautiful things, life and we want it to run riot in our pictures. Then you can see a historical scene with clarity when it is no longer there. For example the ancient Japanese gardens in Tokyo fascinated us, so we put that in our poster.

Back to the pictures, they really look a bit like pieced together picture puzzles. Are you the cyber versions of James Rizzi?

We really don’t know who he is (Rizzi is a Brooklyn-born ‘pop artist’ - ndr) – we’ll google him in a second. I (Kai) really liked the picture books by Munich-born artist Ali Mitgutsch. But these similarities are coincidences.

How do women react to how they are represented by you?

They are full of understanding. (They all snort with laughter after a short silence). All these years, we have only received a few angry emails from women. We are just lads and so of course we will build up a naked woman pixel by pixel!

And who buys your plastic figures? 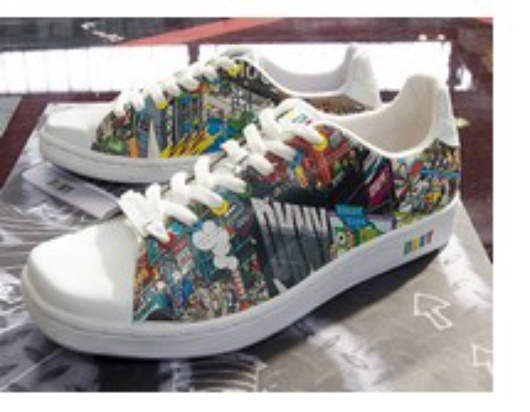 Our neighbour for example runs the administration of a large hospital. And he still goes nuts over our toy figures. Many people also buy them for their children because they are big like ‘playmobile’ men and are, if anything, toys instead of design objects.

Your offices are scattered across Berlin. Do you need this distance from one another in order to work together?

Pragmatically it is, if anything, to do with where we live. Since I (Steffan) live in Zehlendorf (south west of Berlin), I simply have no inclination anymore to traverse the whole city everyday only to get in front of a computer screen all day long. I (Kai) have already shared an office with both these guys but we just end up jabbering all day long!