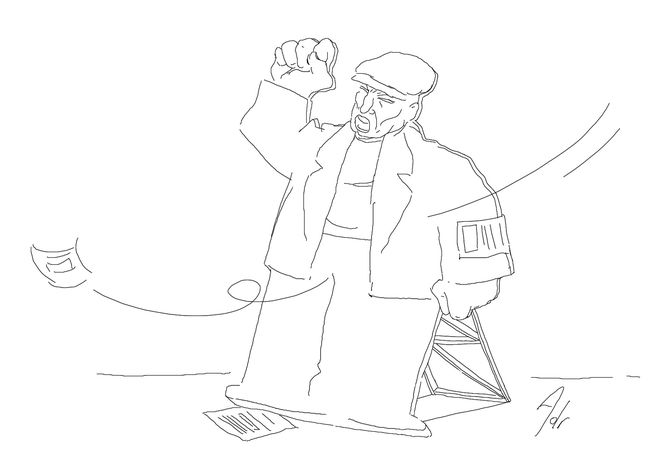 December Belarus elections: protests as absurd as the president

In a bimonthly series, one Frenchwoman in Berlin discusses the latest ludicrousness from Lukashenko land. Post three: the absurd forms of Belarusian protests

Dictatorships are generally political systems in which the entire state is orientated around one person. Accordingly, this often enigmatic person is the constant focus of attention – and this isn't only the case for coverage within the government controlled press. Even in our own column Alexander Lukashenko has been the main player up until now. What about those who oppose the regime though or who simply want to have an active say in what's going on in their country?

We're not just talking here about political opposition in the narrow sense of the word, but rather about what is generally called civil society – citizens who play an active role in their country. Two expectations about Belarus arise in this context. Firstly, you'd assume that in a country where the regime sees activity as a threat and uses as much strength as possible to try to quash diverse forms of protest, the civil society would be weaker and rather unorganised. Secondly, anyone who takes part in opposition against the authorities in a country like this must be 'as hard as nails' - and not just because protests against vote rigging regularly have to be held in a snow storm at minus twenty degrees. The first consideration also sets the tone for many foundations and other donors who look to promote the development of civil society in Belarus through a very diverse range of projects. Although some 2, 500 NGOs maybe really isn't much for a population of 10 million Belarusians, given the circumstances it's still a considerable amount.

There's another surprise: in the EU's eastern partnership it is the Belarusian civil society which decisively influences the dialogue of the civil societies and which has provided the speaker for the partnership's most important committee, the civil society forum, in the figure of Sergey Maskevich. Likewise, a few leading lights of the Belarusian anti-nuclear movement skillfully took advantage of all international forums and mechanisms while heading the protests against the building of the first nuclear power plant in Belarus, the country which suffered the most as a result of the nuclear disaster at Chernobyl. Is something being patronised which in this form actually doesn't need support?

In any case, one thing is certain: the state of publically visible protest in the country itself isn't in nearly such a good state. Perhaps as a result of this, a group of Belarusian protesters came to Germany as part of a project to participate as observers in the protests against the so-called Castor transport, which transports nuclear waste from La Hague, France to Gorleben, Germany. For many of the participants it was a very worthwhile networking opportunity, in which knowledge could be exchanged and experience gathered, whether about unconventional forms of civic opposition or about the problems involved in the organisation of large groups of people.

There was however also a surprise. This came in the form of one individual's astonishing expectation of what the German-organised project should have provided: one participant – and one at that who probably considers himself as among the strongest of the Belarusian opposition – genuinely criticised the fact that the group's members had to sleep on the street. Should we say farewell then to the image of the steely Belarusian opposition, not caring for wind or weather?

Or does this reaction perhaps show that the attempt to promote a civil society from the outside can have odd results, occasionally leading to a certain all-inclusive mentality? Where people therefore expect that those supporting and organising events should take care of absolutely everything and so forget to consider and rely on their own abilities?

But no matter what problems that will always accompany the issue of external support, this still doesn't explain how an observer participating in a protest blockading a street can have any doubt that this means spending the night on that same street as well! Should we therefore also ask whether the absurdity in Belarus has permeated everything to such an extent that we have to bid farewell to common sense within the Belarusian opposition?