On 23 January the British prime minister was criticised after announcing that a referendum on Britain's exiting the EU would be held by 2017. One day later, at the world economic forum in Davos, he emphasised that his country does not want to turn its back on the EU. The EU media reacted to his timing and call for a more competitive Europe

In the midst of the crisis David Cameron's speech comes at the wrong time, the left-liberal Belgian daily comments: 'Naturally it's not a bad thing in itself that the British can express their views on the sense and nonsense of a Europe with 27 member states. It can't hurt that every now and then the otherwise feeble and almost incomprehensible EU debate is heated up by leaders who ask whether the gap between Brussels and Europe's citizens isn't becoming dangerously large. But it is worrying that Cameron has opened Pandora's box at this particular moment. Germany reacted with annoyance, while France was simply outraged. But above all, Cameron's words are causing further uncertainty. And this is the last thing we need at a time when Europe is laboriously trying to recover from a serious economic crisis. If Cameron really wants to get the British economy back on its feet and secure the jobs of his fellow countrymen, he would have been better off remaining silent yesterday' (Koen Vida)

The referendum announced by prime minister David Cameron on whether Britain should stay in the EU is a good idea, the Austrian liberal-conservative daily writes, since there are 'good reasons why the UK should finally take a decision on its relations with the EU. Over the years it has become the club foot of the Union. When David Cameron criticises the EU for its instability, its crisis policies and its lack of democratic legitimation, it must be clearly understood that Britain bears a large part of the responsibility. It is almost to be hoped that the tories win the next elections (in 2015 - ed) and the referendum indeed takes place. Either the British reconcile themselves with the EU and become a constructive member, or the EU will finally have the chance to introduce thoroughgoing reforms without being continually slowed down by the UK. Both alternatives would be better than the current situation' (Wolfgang Böhm)

Cameron's eurosceptic stance is faked, the political advisor Julian Priestley writes on a blog of the London school of economics, accusing the prime minister of just trying to placate the anti-Europeans in his own ranks: 'Despite the customary slickness in presentation, the speech will fool no-one. What is at stake here is very straightforward. Cameron's speech and this cynical apology for a European policy appear to many as solely designed to shore up his personal position as party leader and prevent UKIP from siphoning off votes which could guarantee the return of his party to the opposition benches. But so amateurishly blatant has been the manoeuvre that our partners abroad, the international business and finance community, the British voters and even the eurosceptics in his own party will see through it all' (Julian Priestley)

Read 'David Cameron’s argument will fool no-one, and will relegate the existing EU-UK relationship to the periphery' on Blog EUROPP

Sooner or later Britain will leave the EU anyway, because at heart the British have never been true Europeans, comments the Lithuanian website: 'Not today, not this year, not next year and not in two years - but the UK will exit the EU. For the British this union was never anything more than a business deal: free circulation of goods, services and workers, and that's it.

'While the Frenchman puts his hand on his heart, the Englishman always reaches for his calculator'

The English and the Scottish have always been above all financiers at heart. This is precisely why the UK never introduced and never will introduce the euro, which has always been an ideological and symbolic project. For the Germans, and for the French even more so, Europe has always meant more than just a financial advantage. While the Frenchman puts his hand on his heart, the Englishman always reaches for his calculator. And when he has done all the calculations he realises that the advantages of the EU are not so great for his country - if there are any' (Andrius Užkalnis)

The issues raised in Cameron's speech on Europe concern all Europeans, not just the British, the Bulgarian website points out, concluding that consequently a British referendum doesn't go far enough: 'He refers to the democratic legitimacy of the EU, arguing that Europe's citizens are having far-reaching reforms forced on them without their consent. Several governments in the EU have already been voted out because of these reforms, it's true. But it's also true that support for the governments willing to push through reforms is growing day by day - that is for governments that carry out profound reforms in the name of their citizens, rather than blaming their economic problems on EU integration. The European union is undergoing a transformation. The reforms that it demands of its member states, independently of the political orientation of the government in question, are fully consistent with these changes. If Cameron wants the EU to adapt to the UK, what we need is not just a British, but an EU-wide referendum' (Adelina Marini)

The British prime minister's pragmatic approach towards negotiating new terms for EU membership suits Switzerland to a T, writes the Swiss liberal daily: 'Exiting the EU club is not in Britain's interest. Cameron just wants to renegotiate the conditions of its membership, so as to defend the sovereignty and freedom of the member states (and regain several powers ceded to Brussels). His demand that the EU respect those with a more flexible, nuanced vision suits Switzerland just fine. Above all since it comes at a time when allies with pragmatic, free trade-oriented visions based on democratic legitimation and civil rights are in short supply. Under siege from several sides and lacking the willpower to unite against attacks on our privileges as well as our historic and institutional identity, such a position on the part of the UK is entirely welcome to us. We must take care to make good use of this bonus' (Moreno Bernasconi) 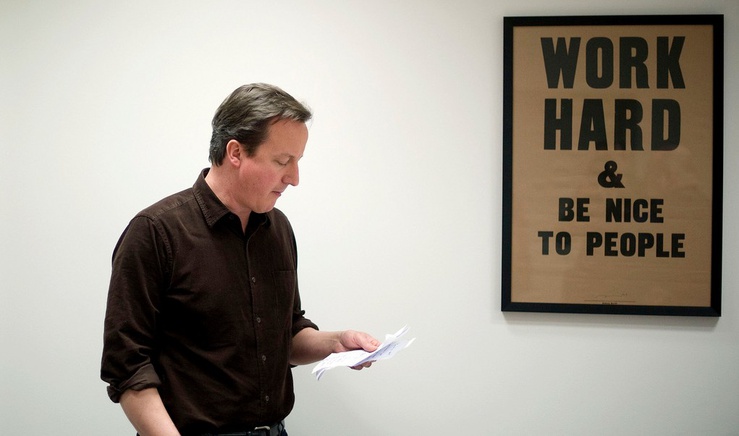 Two questions dominated Cameron's statements in Davos: How much integration can the UK take, and how much can Europe take without losing even more global competitiveness? Cameron has hit the mark: the EU has reached a turning point, the Italian liberal-conservative business paper believes: 'The euro is no longer a purely economic project; it has become a political one. The reality [of the increasingly integrated eurozone] shows that the times for a common European project have ended. The EU has long since split up into several different unions. This demands a change in strategy. We need a political 'pre-constitutional' agreement between the states of the eurozone and the states that don't belong to the monetary union. An agreement that allows the former to create a political union while at the same time making it possible for the latter to renegotiate the terms of competition in the European single market. It won't be easy to create a more differentiated Europe. But Cameron's speech makes it clear that this is necessary' (Sergio Fabbrini)

Several European leaders have criticised Cameron's calls for reform at the world economic forum in Davos. The Irish prime minister Enda Kenny, for example, has excluded any special conditions for individual EU states together with his Dutch colleague Mark Rutte. The British prime minister has chosen a risky strategy, the Spanish conservative daily concludes: 'David Cameron tried to soothe his European partners yesterday in Davos telling them that the planned British referendum was not aimed at getting his country out of the EU. 'We're not turning our backs on Europe. On the contrary', he stressed. Cameron said that the UK wants a liberal Europe with greater flexibility, which is not compatible with some of the recent French and German initiatives. Everything indicates that Cameron is trying to renegotiate Britain's status in the EU to secure better conditions, which won't be easy because there are countries like France that won't play along. In any case we are facing a risky bet'

The fact that many European leaders were so brusque in rejecting Cameron's EU speech only goes to show that he hit the nail on the head, the German conservative daily writes: 'Cameron is right: the EU must become more flexible and competitive. It must clarify the relationship between the euro nations and the other countries of the EU. The repatriation of competences to the national level must be made possible. And finally, the EU must become fairer and more democratic. Those who react with accusations, like the current and former German foreign affairs ministers (Guido Westerwelle: 'cherry picking'; Joschka Fischer: 'reversal of EU development'), needn't be surprised when even more people turn their backs on the EU. Good riddance, many professional Europeans say, although they know that such an attitude weakens their argument for consolidation. Because if it's true that only a united Europe can have clout and garner respect in the world, it won't be successful without Britain's political, military and financial power' (Holger Steltzner)

Britain's outstanding international status resulting from its integration in the commonwealth can't replace its relations with the EU, British historian and journalist Timothy Garton Ash argues in an article published in the German left-liberal daily. Currently in India, Garton Ash writes that: 'Watching Cameron in Mumbai has been a surreal experience. One hears of a liking for London as a place to live and do business; of admiration for UK universities; of some attachment to British traditions of literature, good government and common law. But there is absolutely no echo of the neo-tory idea that a strategic special relationship between Britain and India, Britain and the whole commonwealth, could be any substitute for Britain's place in Europe, and India's relationship with Europe as a whole. India, like Britain, will pursue its own national interest, starting in its own neighbourhood. If Cameron doesn't know that already, he will hear it again on his planned second official visit to India next month' (Timothy Garton Ash)