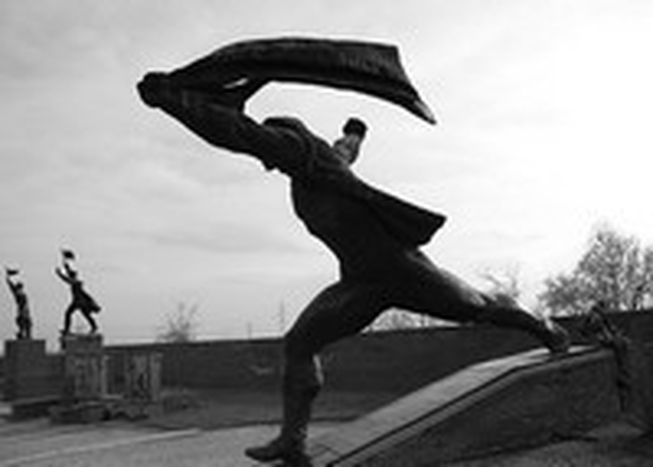 The new Hungarian elite have reclaimed the revolution of 1956, along with former communist symbols, to justify free market economy.

In our collective imagination, the end of communism is often associated with

contribution to the history and development of a given country. In reality though,

it isn't so straightforward. Although it has sometimes been necessary to

make a clean break with communism, it has just as often proved useful to

recover certain elements of the past to introduce the free market economy.

This allowed certain countries such as Hungary and Poland to escape confrontation during the events of 1989. We take a look at the Hungarian case.

During the process of transition, the reaction of the Hungarian people was largely restrained. Both traumatised by the violence of Soviet repression during the 1956 uprising and reassured by the regime of Communist leader Janos Kador in the 70's, Hungarians almost unanimously opted for a gentle changeover. Thus, at the end of the 1980's they allowed the departing communist elite to negotiate the conditions of the transition and chose the reassuring father figure of József Antall during the first free elections. Despite certain radical reforms, the new government avoided emphasising rupture with the pre-1989 regime. Depending on its political orientation, the new leadership was quick to recover many symbols of communism. This allows them not only to stabilise the country by not breaking to harshly with the past, but also to defend their own political and ideological choices.

Szabadaság Tér, the Freedom Square in Budapest, became a symbol of the struggle against totalitarianism though the Red Army triumphed there in 1945 and thus consolidated USSR occupation. In the same way, this new political class presented Kadar’s progressive programme (urban modernisation, development of the countryside, encouragement of social mobility) as a forerunner of the process of transition and opening to the West. Their legitimacy may be easily questioned on account of their association with the old communist elite, but also reassures a population who are beginning to seriously suffer the effects of a free market economy. In some ways, even the free market supporter Viktor Orban (prime minister from 1998 to 2002) was inspires by socialism when he campaigned under the slogan ("Three children, three rooms and four wheels").

If communist symbolism has been largely recycled by post-1989 governments, it is nevertheless important to be careful not to generalise. The imported free market from the West exists in its own right. Political parties, heads of government and the media were quick to tone down the too overtly communist of their programmes and to celebrate a certain form of nationalism. In practice, statues were removed, symbolic monuments destroyed and former Soviet places renamed. The student movements of the 1956 revolt were also reclaimed by the political elites thanks to symbolic events and high pomp ceremonies. In the year 2000, the royal Hungarian crown was transferred from the national museum to parliament. This reappraisal of this historical symbol of Western Christianity and the European roots of the country showed they had turned the page on communism.

Although today both political and economic institutional transition seems largely complete, the pendulum continues to move between past and present. Old points of reference have been kept and new ones kept to steer the country through troubled times. Nevertheless, Hungarian were unable to propose any concrete change and have ill prepared the country’s entry into the European Union.