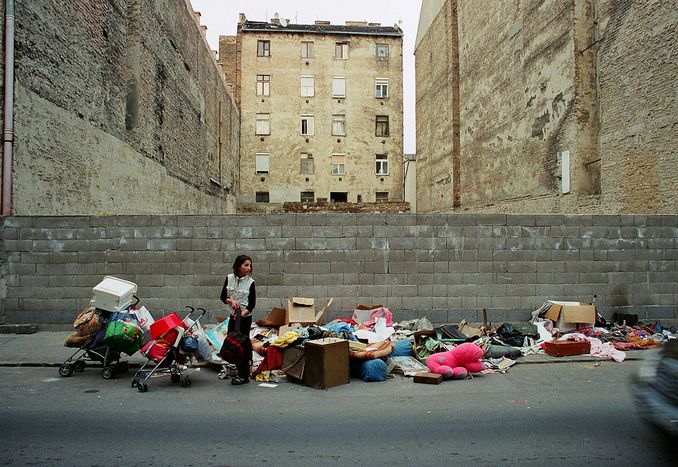 Since the new conservative majority came to power in Budapest in 2010, the local council's anti-poverty strategies include putting a ban on begging in public spaces and reversing an old tradition: the 'social' management of bulk refuse collection known as 'lomtalanitás'

In France various facilities work against the homeless - park benches are replaced with individual seats, lawns are watered at night and entries to buildings are secure (you often need to type a code to enter a flat - ed). Hungary is catching up and its own city planning is on the road to poverty regulation. In the autumn of 2010 the Hungarian government began a battle against the 'inappropriate use of the public space',  targeting begging and rough sleeping in makeshift cardboard beds as well as destroying shantytowns.

Don't sleep on streets or look through bins

The new rules of city planning stipulate a fine for anyone who may venture to sleep in the street or the underground passages which make up a city within a city. Pedestrians use them to cross through the main thoroughfares of the capital or the metro. Over the years they have become a refuge for many homeless people, who find a relatively efficient solution for escaping the biting cold of central European winters. A smoking ban in underground passages was swiftly followed by a prohibition of the consumption of alcohol from 1 January 2011.

Read 'Budapest: poverty, Roma and the neighbourhoods' on cafebabel.com

All of this harms the homeless. Whilst the number of legal pretexts for removing the homeless from the city centre has increased, the strategy adopted seems aimed at making their situation even more uncomfortable and precarious. For example, in certain neighbourhoods of Budapest looking through rubbish bins has been punishable by a 185 euro (159 pounds) fine since the winter of 2010.

'Lomtalanitás' or the right to recover bulk refuse from streets

More recently, a ritual of bulk refuse collection has been the subject of the measures explicitly targeting the homeless. In the tradition of Budapest, the lomtalanitás designated a legal period of time during which homeless people could recover the bulk refuse lying in the streets, which was made up of objects and furniture residents wished to get rid of. Once the homeless found their happiness, the local council would collect the rest, thus perpetuating a form of social management of Budapest's refuse. Hpwever, from now on, inhabitants will have to book an appointment in advance with the collection services and avoid any disturbance on public roads.

Budapest aligns its public space management with the prevailing territorial ideology which vaunts both disinfection and security, sweeping the danger off its streets, thus avoiding otherness. However, poverty will not disappear just because it is made invisible. On the contrary, these socio-spatial marginalising measures will merely worsen the situation of the destitute in the most hypocritical way possible.