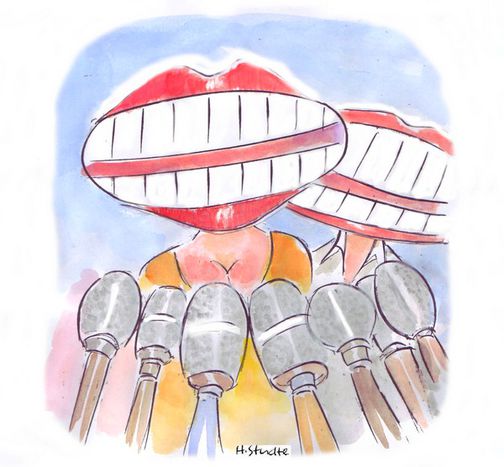 Armed to the tooth

Teeth: find out why the Italians eat their pasta to the them, why the Brits pull them and the French have them all - idiomatic expression of the week

Spain, a few years back. Julián Muñoz and Isabel Pantoja. He is a well-known corrupt mayor. She is a popular folk singer. The couple are media darlings. In a restaurant in Marbella, both enjoy their pasta al dente

(to the tooth), cooked with the right tenderness to still be firm on the bite. The police are chasing the crooked politician, but he still has all his teeth (avoir toutes ses dents

, or is still on good form). As long as he can sink his teeth into his plate (hincarle el diente

Meanwhile, a hoarde of journalists are armed to the teeth

with cameras and microphones outside, waiting for them in the winter night. The French ones are freezing, their teeth chattering (claquer les dents

). The singer insists that the couple hurry up and leave through a back door to evade the paparazzi, or einen Zahn zulegen

(put another tooth) as the Germans say. The paps end up snapping them, but it’s like pulling teeth

to get a comment out of the pair. Dientes, dientes, que es lo que les jode

(teeth, teeth, that’s what disgusts them) squeals Señora Pantoja, the more media-exposed of the two, who uses the famous Spanish expression to smile and get away quick.