AddioPizzo - end of protection money for the Mafia

The Italian committee strikes back against the Sicilian Mafia, but consumers and businessmen are increasingly saying no to the ‘Pizzo’, or the protection money blackmailed from them by the Mafia

‘To be independent, to open a pub.’ That was the collective wish of a group of seven Italian friends in their thirties, who agreed on the plan together in Palermo in early 2004, explains Franceso Galante of the ‘AddioPizzo’ (‘Goodbye to protection money!’) committee. The question of how one would react to the demands of protection money has arisen rather quickly. Nothing has become of the idea of the pub but because of these young people something has changed in Palermo. Together they decided to no longer quietly accept the oppression of their hometown by the Cosa Nostra. And so, on a June night in 2004, they gave out labels with the inscription A whole nation which pays protection money is a nation without dignity.

A break from the Omerta

Since this day, AddioPizzo has campaigned tirelessly against this oppression. Because almost everyone who wants to carry out any economic activities in south Italy has to count on a request for protection money. If you don’t pay, there are intimidation attempts, once even a firebomb and at the very least attacks on life and limb. The Mafia turn over around 90 million euros alone in Italy; that equates to about 6% of Italian pre-taxed domestic goods. This is achieved through extortion, usurious interest, armed robbery, forgery and smuggling. Using the oppression for protection money they protect themselves with controls over their territory and protect the climate of Omerta (the ‘silence’) through the use of violence. 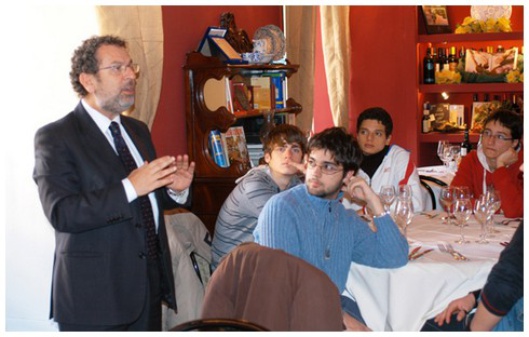 Nicola Gratteri, attorney for the regional office of the Mafia combat on Reggio Calabria, describes the effects of organised crime on the market because of Calabrian Mafia (in the region south of Naples): ‘The 'Ndrangheta is there to buy businesses in central and north Italy: hotels, restaurants, pizzerias. The fact that the Mafia is not just an Italian problem was brought back in mind through the latest bloodbath in Duisburg in August 2007, during which six young Calabrians were shot in front of a pizzeria. 2007 wasn’t the first time it’s been known that the Italian Mafia have invested millions in property, gastronomy and on the stock markets Mafia in Germany, Belgium, Holland, Spain and France.'

The money, which stems from the Ndrangheta and is then invested in the legal market, falsifies the market development because the Mafia entrepreneurs follow logicians, who distort the functioning of the market.’ According to Gratteri, the money enables the financing of election campaigns and allows such people in parliamentary elections to pay their bill later. The abolition of democratic life exists everywhere.

From the then-still anonymous cries of protest by AddioPizzo in Palermo, a groundbreaking initiative has developed. From a regularly enforced and controlled list, the committee collects the names of the driving forces in business who do not pay protection money and openly admit to this. This decision is supported by a list of censored consumers, who voice their solidarity in the form of a censored consumption ‘print-out’. In September 2007 the Italian industrial employers' federation Confindustria also implemented a long overdue step: ‘He who pays protection money and works in conjunction with the Mafia is excluded from the industrial association.’

Additionally, one of the most important instruments in combating the Mafia is, according to Nicola Gratteri, the abolition of the discretion agreement. This frequently practised mode of shortening proceedings means that the punishment of 30 years imprisonment, thought of originally by a judge, can be reduced to seven or eight years in various instances. Through good behaviour one can see a man condemned because of international drug trafficking walk free again after five years.

The director of the monthly magazine Antimafia Duemila, Giorgio Bongiovanni, sees the interdependence between the Mafia and politics as the main problem: ‘so long as this relationship is not threatened, and some picciotto (the lowest position in the Mafia’s hierarchy) is still prepared to be a Mafia boss, the danger to our democracy will continue to exist.’

Perhaps the January 2008 abandonment of the five year arrest of the president of the Sicilian region, Toto Cuffaro, who was sentenced to imprisonment because of his support of one of the Mafia ‘bigshots,’ is a real chance for a new beginning politically in Sicily. Rita Borsellino, sister of the judge and ‘Mafia-hunter’ Paolo Borsellino, who was murdered in 1992, and long-term campaigner against the Mafia, is a popular candidate for many voters. She will get the vote of AddioPizza under any circumstances.