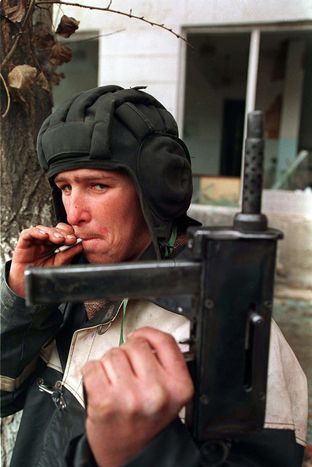 Achmed Sakajew: ‘Chechnya is the only place in Europe devoid of law’

The former Chechen prime minister is critical of Europe’s farniente in the North Caucasus. Interview

As leader of the Chechen separatists the London-based exiled rebel is the most influential representative of the Chechen cause in Europe. Russia accuses him of terrorism, separatism and organised crime in the southern Russian republic via Interpol. For Moscow, Sakajew is the co-ordinator of the terror in the Caucasus. He himself admits that he is a powerless keeper of the list and advocate of the dream of an independent Chechen state. Interview

Achmed, how do you feel when you hear news from Chechnya?

Achmed Sakajew: We’ve only heard negative things over the last decade. It stresses me as a person who was involved in all of the political processes. But I understand the hopelessness of the situation.

How would you describe that situation – war or peace? Is it getting calmer?

Achmed Sakajew: The Chechen people are hostages to the Kremlin and their stooges. There’s violence day in, day out. Every day people die. Every day there are kidnappings, acts of torture, executions without trials. Chechnya is an open wound on Europe’s body. Europeans should and could get involved, but they keep their eyes closed.

Who has the say in the revolt? Moscow accuses you of playing a vital role in the battle against Russia…

Achmed Sakajew:  It’s not the case, to my regret. I have no possibility of having any influence on the military situation. There was some disruption with the unilateral call to the (unrecognised region of the) Caucasian Emirate via (the Chechen islamist rebel leader) Dokka Umarov in 2007. Since then the military component of the resistance split with the political part of it. But aside from our military resources its clear that there’s no solution through violence to this conflict.

Chechnya’s substantial autonomy spreads as far as the Republic having its own security services, fiscal jurisdiction and so on. Is that a solution?

Achmed Sakajew: I have always maintained that independence is not a means to an end. It guarantees the security of our people for us. Even (prime minister Vladimir) Putin once remarked that Chechnya’s formal status was not of importance to Russia. What is important for Moscow is for Chechnya not to be a deployment basis for aggressors. I am convinced that we can find a formula for co-existence and a solution to the conflict on this basis.

So what is Chechnya legally at the moment?

Achmed Sakajew: Chechnya is the only place in Europe devoid of law. There are absolutely none.

Russia argues that lawlessness is the order of the day because terrorists like Dokka Umarov are still active – and you’re named in the same breath.

Achmed Sakajew: I haven’t been in Chechnya since 2000. I can’t have any more influence on the ground. The responsibility for what’s happening in Chechnya today lies with those who are controlling the situation. I am convinced that Umarov is being guided. The provocations and terror acts that he has become known for (such as the Moscow underground metro attacks in March 2010 - ed) were co-ordinated and are under the control of the Russian government and their federal security services.

What kind of realistic solution do you propose?

The author of this article Jonas Huber is a correspondent for the east-European writers network and cafebabel.com partner n-ost, based in Berlin