A United States of Europe?

The European Convention has laid the foundations for a Federal Europe. Qualified majority voting, a stronger parliament and citizens’ initiatives are paving the way for deeper integration 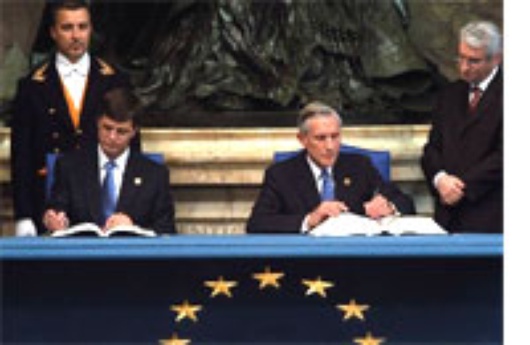 On 28th October 2004, heads of states and governments adopted the Constitution which the European Convention had drawn up. The leader of the Committee, Valéry Giscard d’Estaing made repeated references to its historical antecedents, including the Philadelphia Convention of 1787, which led to the most significant constitution in the history of democracy and brought about the American federal republic. Does the EU Constitution therefore signify a step in the direction of a ‘United States of Europe’? Aside from the symbolic impact of the term ‘constitution’, the treaty includes several terms that could promote the vision of a federal Europe.

The EU has a legally binding Charter of Fundamental Rights, and this takes a prominent position in Part two of the constitutional treaty. Nearly every democratic state has a constitution that outlines its citizens’ civil rights but since the EU has no ‘people’ (demos), and therefore cannot be considered a state, the adoption of a charter of rights is particularly significant. Meanwhile, the only directly elected body of the Union – the European Parliament – is gaining further legitimacy because of the increase in its legislative powers. Only in a few explicitly stated areas, namely the Common Foreign and Security Policy (CFSP), does it have no say in decisions, although it does not have a right to put forward initiatives, and in this respect it clearly differs from a national parliament. However, in certain circumstances, it can propose legislation.

With this comparison of the EU with a nation state already looking slightly tenuous, we have to bear in mind that the majority of national laws (about 90%) depend on bills drafted by governments. The EU is characterised by a unique system of ‘checks and balances’: legislative, executive and judicial authority are divided up, and the corresponding organs monitor each other. There is no separation of powers in the Montesquieuan sense, but the principle of institutional balance fulfils the same function and has proved successful up to now - as the 1999 resignation of the Santer Commission in response to the threat of a vote of no confidence from the European Parliament shows.

The constitutional treaty skews this balancing act as the European Council is to be awarded new authority on legislative matters, without provision being made for a parliamentary checking of these powers. This is alarming and has led Stefan Griller, an expert in EU law, to speak of an ‘institutional quadrangle’ and a new ‘supranational inter-governmentalism’. However, the Constitution does lay out which institutions are responsible for what, although nation states are still ultimately in control of these institutions so power remains decentralised.

One of the main ways in which the EU is deviating from the classic model of an international organisation and veering towards the definition of state is in its use of qualified majority voting as the mode of decision-making in more political domains. Unanimous voting has not been abandoned completely, however. On sensitive issues such as the CFSP and tax policy, member states were not prepared to give up their veto. The right of citizens to participate in the democratic life of the Union, as well as the principle of open decision processes that involve and affect people as directly as possible, have been written into the Constitution.

On top of this, it is now possible to start a ‘citizens’ initiative’: a minimum of one million nationals of a ‘significant proportion’ of Member States can petition the Commission to put forward proposals on subjects upon which, in their view, the Union needs to legislate in order to honour the Constitution. Thus, despite certain weak points, the EU Constitution has great potential and represents the first step on the road to a federal Europe.