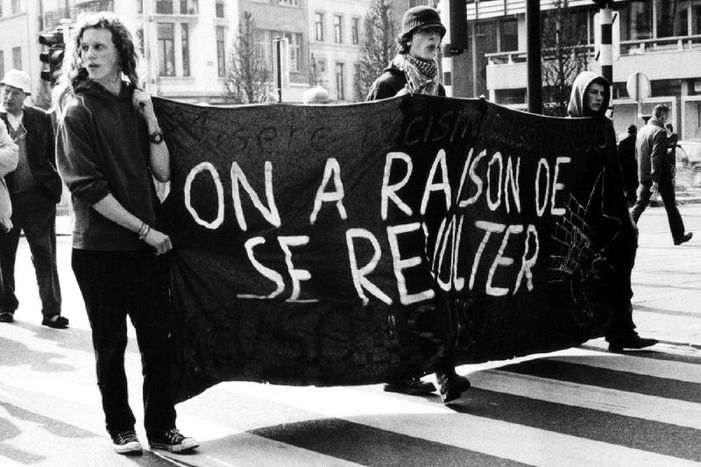 Hope for young Europe: a recipe for ending the raise of radical parties?

Last Berlin elections put another brick on the wall: Alternatif für Deutschland (AfD), earning 14% of the votes, showed they are serious candidates to take a piece of the cake in next year votes in Germany. In France, the raise of Front National (FN) is well known.

Young people are apparently being the biggest contributors to FN's raise: 34% of people younger than 30 years old would vote FN according to a survey commissioned by 20 minutes, while in Germany a study conducted by German Institute for Economic Research and Humboldt University showed AfD supporters tend to be males, under 30 and unemployed.

Europeans are witnessing how traditional parties are doing worse and worse in all type of elections while options representing extreme positions are becoming more popular.  Examples can be seen in countries having held elections in 2016: In Spain, left-leaned Podemos attained 21,1% of the votes. In Austria, extreme-right FPÖ got a virtual tie with the Greens for the presidential elections earlier this year. Among their voters, 58% would be 29 years old or younger, according surveys conducted by institutes SORA and ISA. As a last example, in the Belgian region of Flanders, Vlaams Belang, an extreme-right party, would earn 13,1% of votes in according to a poll commissioned by RTBF-La Libre last September.

Why does youth appear to support new parties? An Eurobarometer published this year could point out a relevant reason:  57% of Europeans below 30 years old reckon youngsters have been marginalised and excluded from economic and social life, especially those from countries suffering bigger unemployment rates: Greece (93%), Portugal (86%) and Spain (79%).

Member of the European Parliament (MEP) Enrique Calvet , from liberal group ALDE says that “it is undeniable that disillusion has indeed settled on the youth spectrum”. MEP Calvet, who entered the hemicycle representing UPyD, a Spanish party established in 2007, claims that “young people are legitimately demanding political transparency and honesty”. Calvet believes that “traditional party system has become feeble for this new generation of Europeans” and warns about the dangers an excluded youth could carry: “young people will be drawn to turn their vote towards an illusory concept of change, without taking under consideration the danger they pose to the European project and thus to their own welfare and future”.

MEP Siegfried Muresan, Spokesman of EPP group, biggest party in the Eurochamber, shows a similar belief: “populist parties have nothing to offer European youth. Their simplistic solutions on complex issues will only end up fostering disappointment and mistrust.” When asked for a recipe to bring back the youth vote, Muresan explains that it is needed to explain the EU benefits such as the creation of jobs by the Digital Single Market –800,000 new jobs in the digital sector by 2020 according to the EPP- and Erasmus Plus and Youth Guarantee programmes. If true, there is a long way to go: according to the same Eurobarometer cited above, 76% of European youngsters never heard about the Youth Guarantee, while 17% did not know what exactly that is.