All around Europe, meat is getting butchered. Whether it’s for environmental reasons or inhumane slaughterhouses, one question remains: will vegans get the last word? We’re not so sure, since France’s butchers are digging their heels in. Let’s start with Yves-Marie Le Bourdonnec, who intends on “putting the cows back in the fields” with his famous “I love bidoche” movement.

In his book Faut-il manger les animaux (“Must we eat animals” in French, ed.), Jonathan Safran Foer launches a forceful attack on industrial farming methods, which he claims contribute “40% more to global warming than all of the world’s transport”. The International Agency for Research on Cancer (IARC) claims that red meat is “probably” carcinogenic. And a month before Christmas, Terra Nova, one of the major European think tanks, advised people to reduce their meat consumption for environmental, health and financial reasons. All of this, along with a recent trend in healthy eating and veganism, could severely damage the future of butchers across the continent.

Even in France where meat is a mainstay, many are ready to shun butchers. Like L214, an organisation focused on animal rights, who are known for releasing provocative videos on the bloody practices that take place in slaughterhouses in the south-east of France. When they were published in 2016, the images shocked the public, unmasking a crude view of animal cruelty and deplorable hygiene standards in the industry.  While many supported L214, Yves Marie Le Bourdonnec didn’t. The Parisian butcher describes them as “extremists”, even “dishonest”. “With them, things become absurd… we’re talking about anti-speciesism; they are refuting the history of the earth and the evolution of species,” the butcher laments, considering himself as being “among those that are the most impacted by their attacks in Paris.” 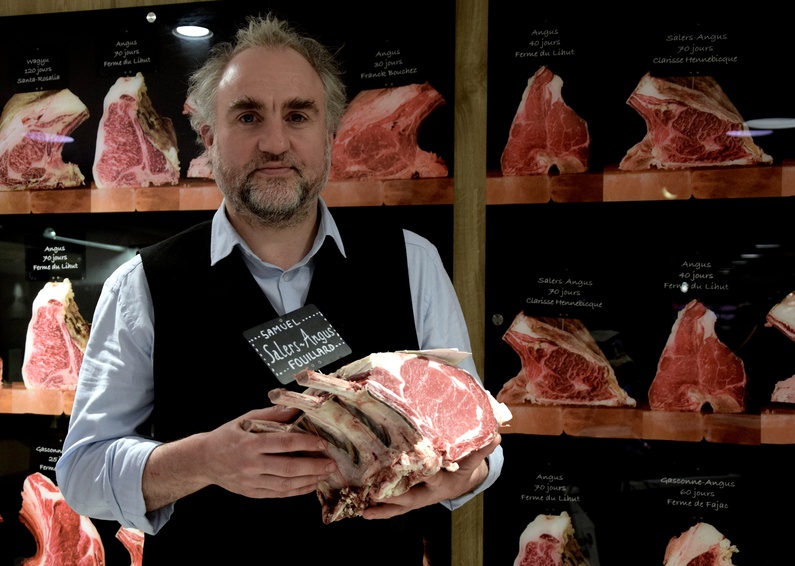 Still, it would be too easy to frame the “I love bidoche” movement, as well as its protagonist’s philosophy, in constant opposition to the anti-meat movement. Firstly because Yves-Marie Le Bourdonnec is not just your average butcher. The 49-year-old was elected best Parisian butcher in 2003. Today, he is at the head of four butcher shops in the Ile-de-France region. On Thursdays and Fridays, he welcomes his clients in his privileged quarters located in the basement of the Galeries La Fayette. Like in a restaurant, the tables are laid out for those who wish to taste the meat produced by this famous Parisian butcher. “I created ‘I love Bidoche’ around ten years ago as a response to the vegan movement, whose philosophy I share,” the meat surgeon adds, referring to the need to reduce meat consumption.

Le Bourdonnec doesn’t offer any resistance when faced with an array of different food movements. He even admits straight away that eating meat is bad for the environment and is expensive to produce. “We won’t be able to eat meat over the next 20 or 30 years in the same way that we have been [doing]. We will have to start eating much smaller quantities,” he explains. It was from this reckoning that “I love bidoche” was born. Through his movement, the butcher suggests changing the way meat is produced to offer a consumers a better quality. “Kind of like the Japanese are doing. They eat 30g of meat per meal. In France, we eat about 150. If we eat a fraction of this, we need to make sure that what we consume is unforgettable,” he enthuses, running his fingers over his three-day beard.

The butcher didn’t need to become a fortune teller to understand that “less is more”. After being on the rise steadily since the 1950s, meat consumption in France started to fall as of 1998. According to research carried out by the Minister of Agriculture in France, we have gone from 94.1 kg consumed per person in 1998 to 86 kg in 2014. The numbers represent a larger tendency: the French are still heavy meat-eaters. That being said, for the creator of “I love bidoche”, the pressure of environmental impacts, medical advice and the price of certains cuts is starting to weigh on him. Sooner or later, consumption will have to fall.

Dressed in a black waistcoat over an azure blue shirt, he is the only in the butcher shop not wearing the traditional white apron. This meat-lover was raised as an orphan by his aunt and uncle in Brittany, where his passion for meat was born. “Twice a year, a butcher would come to our farm in Tréguier and slaughter an animal for us to eat. I was fascinated by what he did,” he recalls. Following the loss of his biological father, Le Bourdonnec decided to trace his family tree and find his mother’s family. And surprise, surprise: “I realised that they had all been butchers, from father to son. I had no idea!” he exclaims. He continues, with a smile on his face: “Same goes for my sons who, at first, wanted nothing to do with this profession.” 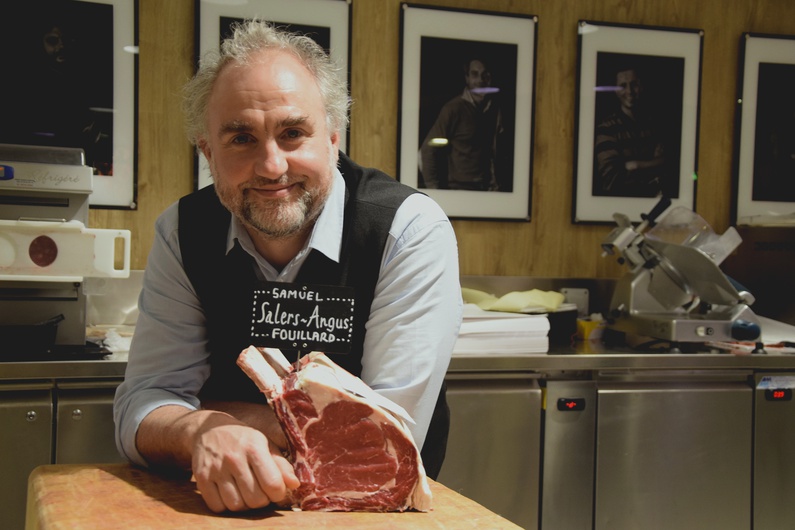 According to this meat specialist, being a butcher has gone out of fashion over the last years. It is thanks to his unique approach to the trade that, in his eyes, has guaranteed Le Bourdonnec’s success. “Making meat sexier, more upmarket, being ethical and respecting the farmers, who are the losers in this industry,” he cries, waving his hands in the air. When criticised for making a marketing trick out of his meat, the butcher insists that this doesn’t bother him. “I can prove everything I do. We can go and visit the farmers. In France, butcher shops tell stories of a world that disappeared 50 years ago. I am not just making up children’s stories,” he exclaims. What Le Bourdonnec is telling us is that the way French gastronomy is classed as a human heritage has made the French “extremely pretentious.” He explains: “We want to make people believe that everything to do with gastronomy comes from France, even meat.”

Ruffled by the way the media talks about meat, the butcher denounces a kind of chauvinism in the industry, where everyone congratulates each other and “tells stories”. He goes on: “In the papers, you hear arguments that aren’t more than just children’s stories.” He also complains about the “naivety” that litters TV programs when it comes to farmers, which “take the piss out of people.” So Le Bourdonnec took a 180 degree turn and looked elsewhere, where people were already talking about “neo-butchers.”

Le Bourdonnec had his eureka moment when he was in Brooklyn and met with Tom Mylan, a neo-butcher famous for having “put the cows back in the fields.” At first glance, it’s nothing revolutionary, but the Frenchman doesn’t agree: “At a time where the industrialisation of meat is at its zenith in the United States, he decided to take a step back and say: ‘Put the cows on the golf courses instead of playing golf there and you’ll see, the meat will be better.’” In his eyes, being a neo-butcher means being responsible, being conscious of what we eat and of the farmers, who are overseeing everything. “Eating meat in the 60s and 70s was a sign of social success. We ate it to prove that we earned a good living,” the French butcher continues, claiming that today “we don’t kill an animal for nothing.”

At the start of his movement, this father decided to travel in order to take part in butcher ‘battles’ all around the world. Since he wasn’t able to find any enthusiasm in France, he left to try and make a name for himself abroad. “After meeting Tom Mylan in Brooklyn, I went to meet Henrick Dierendonck in Beglium and Tim Wilson in England. Together, we shared our experiences,” he recounts. They got on well and the three of them went on to take part in competitions that they organised themselves. “The one that I will never forget was in Belgium. Henrick even set up a ring, and we prepared the meat right there inside it.” 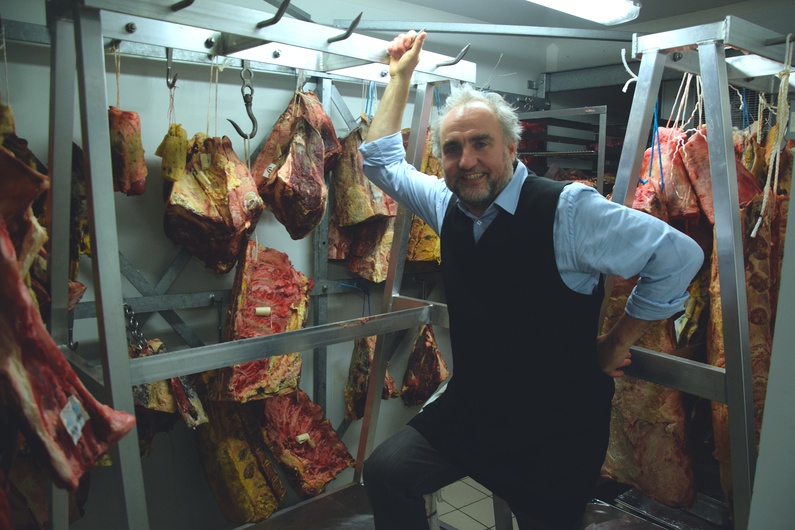 Back in France, he discovered different approaches to his work. “There are three main schools of thought in terms of cutting meat. The French are very precise, almost surgical. The anglo-saxons cut in slices, and then the Japanese are geometric, seeking out the very fibres of the meat,” he explains. He built his knowledge of cutting meat by studying these methods and later creating his own. The Bourdonnec method is what he teaches his apprentices at school, talking to them about an almost mythical professional journey, lauded by glossies. In 2008, he wins the accolade for the best burger in the world, as judged by the New York Times. Two years later, the same newspaper calls him the “meat magician” due to his cutting techniques that he shows off in his butcher shop in Asnières in the suburbs of Paris. In 2012, he secures his place in Who’s Who, where they list the 22,000 people who have shaken up France. That same year, he rides the wave and poses naked with a prime rib of beef for a calendar. Today, after nearly eight years of existence, his “I love bidoche” movement is associated with French celebrities like Jack Lang, Pierre Arditi and Philippe Catherine. And in 2013, TEDx Paris contacted him: “They were looking for people who are revolutionising their profession… As a theatre-lover, I found myself up on stage at the Châtelet Theatre in front of 2,000 people. I truly adored it.”

But while Le Bourdonnec has been able to safeguard his future in the industry, other butchers will probably not follow in this vein as the market is in the middle of a drastic change. “We eat less and less meat, so of course the butchers are worried. You need to be a visionary and to understand how people will eat their meat in the future.” According to the Frenchman, 50,000 butchers were active in France in the 90s and soon there will only be 8,000 left. “In 1987 in Paris and its surroundings, there were 12,000 butchers. Today, there are only a thousand,” he details, while elaborating that the industry is not necessarily in a crisis but the profession needs to be reinvented. It turns out that the doesn’t consider France to be a huge meat-consuming country, but sees its countrysides as ideal places to produce it. He believes that meat consumption in the US is far greater: “Especially beef. They industrialised the process and have created an animal pumped full of hormones, the Black Angus. These herbivores have not eaten any grass for a very long time,” he explains. This time, there is no need for any vegans, activists or animal rights organisations to say it. It comes out by itself: “There is no more poetry.”