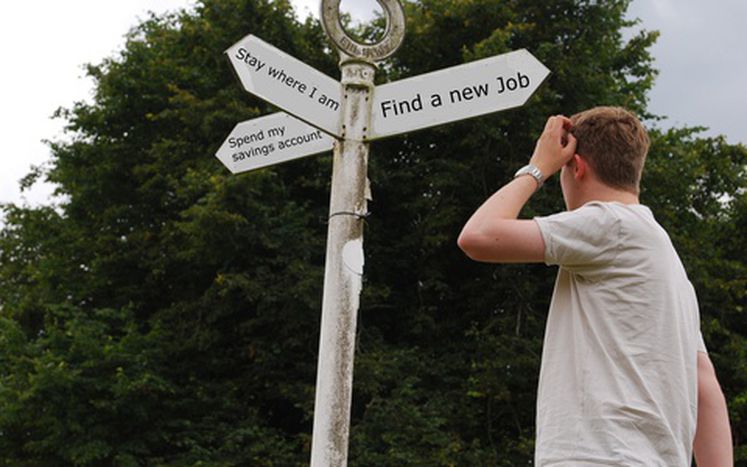 Youth Unemployment: Europe in the doldrums

The EU member states plan to introduce a job guarantee for all unemployed youths within the next two years. This was agreed at a special meeting on youth unemployment attended by 24 heads of state and government in Paris on Tuesday. Commentators doubt such a programme can be financed, particularly in the crisis states, and argue that measures to boost the economy make more sense

Delo – Slovenia - Castles in the sky

The "youth guarantee" scheme under which all unemployed youths under 25 are to be given access to a job, a traineeship or work experience within four months of becoming unemployed is to be put in place over the next two years, the heads of state and government resolved at their special summit in Paris. Tell us another one, the left-liberal daily Delo writes: "The fledgling recovery in the Eurozone won't be enough to dispel the enormous problems. On the EU level the decision has been taken in favour of homoeopathic doses. The EU budget earmarks six billion euros in the next two years for the fight against Europe's biggest problem [youth unemployment]. ... For that reason guaranteeing youths will have a job or traineeship four months after they finish school or lose their job is like building castles in the sky. ... The idea that crisis countries in the stranglehold of austerity measures and the recession will really be able to create millions of jobs is completely implausible."

The leaders of the EU must take concrete steps to combat youth unemployment instead of spouting flowery phrases, the liberal-conservative daily Diário de Notícias admonishes: "When 24 of the 28 EU heads of state and government meet outside of the Council, the issue at hand can only be of particular gravity and urgency. And indeed, of the approximately 24 million Europeans under 25, 5.5 million are unable to find a job. Youth unemployment in the EU has climbed to 23.5 percent. ... And everyone knows that things are even worse in Southern Europe. ... This is now the second conference that has been held on the subject - without producing any positive results. Now a 'youth guarantee' is supposed to produce results from January 2014. ... What is not being discussed, let alone named as a primary objective, is the urgent need to promote growth in Europe to combat the cancer of unemployment - be it youth unemployment or joblessness in general.

The heads of state and government of the EU have announced that they are allocating 45 billion euros to fight youth unemployment. But at the end of the day economic development is the crucial factor for young people's chances on the job market, the left-liberal business daily Cinco Días comments: "The funds set aside for fighting unemployment are just part - and not even the most important part - of the integrated strategy that Europe should implement if it wants to cut its unacceptable youth unemployment rate. Six million young Europeans - apparently the best educated in history - lack employment prospects and consequently the possibility to plan a future. But creating employment, both for the young and the rest of the population, is a direct consequence of economic growth. The funding is welcome, but economic activity is the best instrument for ending joblessness."

The battle against youth unemployment should also be aimed at making it possible for socially disadvantaged youths to acquire experience abroad, the two general secretaries of the Franco-German Youth Office demand in the left-wing daily taz, pointing out that the biggest challenge is "to reach out to youths who because of their social background and level of education are at a disadvantage on the labour market. Their greatest obstacle is that they don't even consider seeking employment elsewhere in Europe. So it's important to raise their awareness of the possibilities and to ensure that the skills acquired through spending time abroad receive formal recognition. This recognition could also serve to convince those who haven't dared make such a move so far, thus improving their employability. ... Acquiring skills in moving around outside one's own country used to be part and parcel of a person's education in the times of the 'wayfarers'. Today the priority must be to revive the opportunities for acquiring mobility experience."